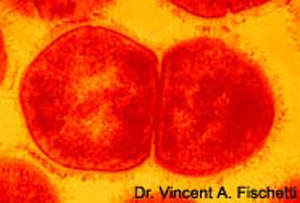 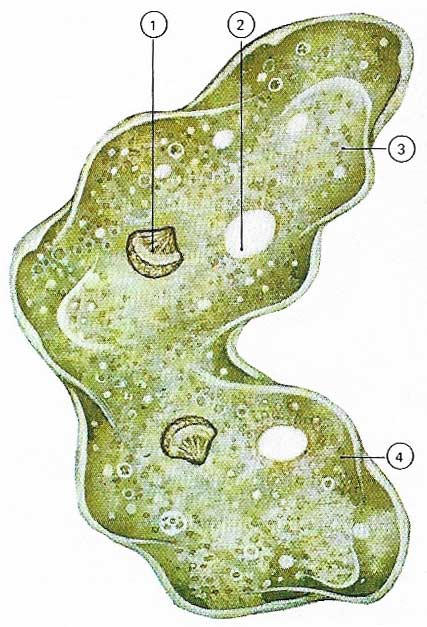 Asexual reproduction in protozoans takes place by binary fission. In amoeba this simply involves the splitting of one cell into two equal parts. The process starts with the appearance of chromosomes in the nucleus, which become shorter and thicker. Chromosomes, each made up of two chromatids, line up across the cell while contractile vacuoles (2), having previously replicated, begin to separate. The chromatids are drawn apart (1) and the cytoplasm starts to split into equal halves. With chromosome division complete, the cytoplasm finally divides, the two resulting daughter amoeba (3, 4) are identical.

Binary fission is a method of asexual reproduction that is employed by most prokaryotes. In binary fission, the living cell divides into two equal, or nearly equal, parts. It begins when the DNA of the cell is replicated. Each circular strand of DNA then attaches to the plasma membrane. The cell elongates, causing the two chromosomes to separate. The plasma membrane then invaginates (grows inward) and splits the cell into two daughter cells through a process called cytokinesis.

Binary fission theoretically results in two identical cells. However, the DNA of bacteria has a relatively high mutation rate. This rapid rate of genetic change is what makes bacteria capable of developing resistance to antibiotics and helps them exploit invasion into a wide range of environments.

Similar to more complex organisms, bacteria also have mechanisms for exchanging genetic material. Although not equivalent to sexual reproduction, the end result is that a bacterium contains a combination of traits from two different parental cells. Three different modes of exchange have thus far been identified in bacteria. (See gene transfer.)

Conjunction involves the direct joining of two bacteria, which allows their circular DNAs to undergo recombination. Bacteria can also undergo transformation by absorbing remnants of DNA from dead bacteria and integrating these fragments into their own DNA. Lastly, bacteria can exchange genetic material through a process called transduction, in which genes are transported into and out of the cell by bacterial viruses, called bacteriophages, or by plasmids, an autonomous self-replicating extrachromosomal circular DNA.