Fig 1. Three types of viruses: a bacterial virus, otherwise called a bacteriophage (left center); an animal virus (top right); and a retrovirus (bottom right). Viruses depend on the host cell that they infect to reproduce. When found outside of a host cell, viruses, in their simplest forms, consist only of genomic nucleic acid, either DNA or RNA (depicted as blue), surrounded by a protein coat, or capsid. 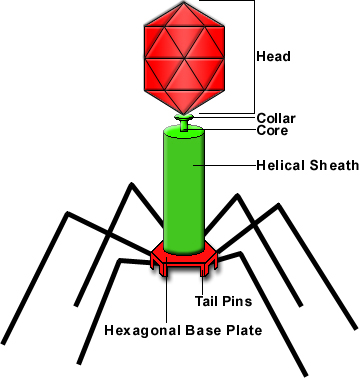 A virus is a disease-causing entity on the borderline between life and non-life. Viruses are capable of reproducing only within a living host cell. They effectively reprogram the cells they invade, turning the cellular machinery into a biological factory for manufacturing fresh copies of themselves. For more details, see viral reproduction. The simplest viruses consist of a single helical strand of RNA coated with protein molecules. Other viruses are more complex and may have a diameter of up to 0.2 microns.

All viruses contain nucleic acid, either DNA or RNA (but not both), and a protein coat, which encases the nucleic acid. Some viruses are also enclosed by an envelope of fat and protein molecules. In its infective form, outside the cell, a virus particle is called a virion. Each virion contains at least one unique protein synthesized by specific genes in its nucleic acid. Viroids (meaning "viruslike") are disease-causing entities that contain only nucleic acid and have no structural proteins. Other viruslike particles called prions are composed primarily of a protein tightly integrated with a small nucleic acid molecule.

Viruses are generally classified by the organisms they infect, animals, plants, or bacteria. Since viruses cannot penetrate plant cell walls, virtually all plant viruses are transmitted by insects or other organisms that feed on plants. Bacterial viruses are known as bacteriophages.

Viruses are further classified into families and genera based on three structural considerations: 1) the type and size of their nucleic acid, 2) the size and shape of the capsid, and 3) whether they have a lipid envelope surrounding the nucleocapsid (the capsid enclosed nucleic acid).

There are predominantly two kinds of shapes found amongst viruses: rods, or filaments, and spheres. The rod shape is due to the linear array of the nucleic acid and the protein subunits making up the capsid. The sphere shape is actually a 20-sided polygon (icosahedron).

A bacteriophage (Fig 2), also known simply as a phage, is a virus that attacks and infects bacteria. The infection may or may not lead to the death of the bacterium, depending on the phage and sometimes on conditions. Each bacteriophage is specific to one form of bacterium.

Bacteriophages make up a diverse group of viruses, some of which have complex structures, including double-stranded DNA. Since the first was discovered in 1915, bacteriophages have been important in the study of genetics.

A viral disease is an infectious disease due to a virus.

Conceivably, complex combinations of molecules could exist on other worlds which, although not living organisms in any familiar sense, could behave like viruses given a suitable host. This would present a threat to humans and other terrestrial life-forms which would have no immunity to such alien infection. It was the reason that elaborate quarantine precautions were planned for the return of the first astronauts from the Moon. Even more care will be required when people first come into contact with Martian rocks and soil (see back-contamination).

The possibility that terrestrial viruses could mutate into dangerous, "alien" forms if subjected to highly ionizing radiation, such as that present above the protective blanket of the Earth's atmosphere, was exploited by Michael Crichton in The Andromeda Strain.