Fig 1. Genes are made up of DNA. Each chromosome contains many genes.

Fig 2. An allele is one of two or more variant forms of a gene at a particular location on a chromosome. 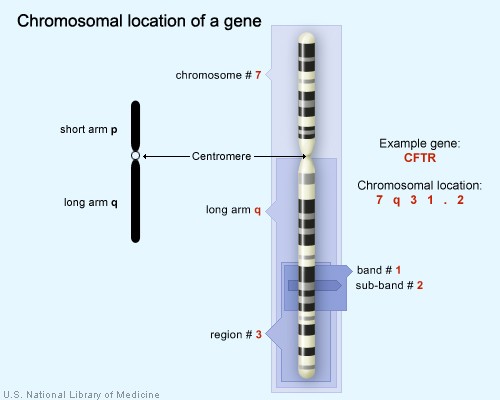 The gene is the basic unit of heredity. A gene consists of a long sequence of DNA nucleotides which occupy a specific position (locus) on a chromosome (Fig 1). Genes can carry the code for synthesizing proteins and RNA molecules, and also regulate the transcription of RNA sequences.

In humans, genes vary in size from a few hundred DNA bases to more than 2 million bases. The Human Genome Project has estimated that humans have between 20,000 and 25,000 genes.

Every person has two copies of each gene, one inherited from each parent. Most genes are the same in all people, but a small number of genes (less than 1 percent of the total) are slightly different between people.


Location of a gene

Geneticists use maps to describe the location of a particular gene on a chromosome. One type of map uses the cytogenetic location to describe a gene's position. The cytogenetic location is based on a distinctive pattern of bands created when chromosomes are stained with certain chemicals. Another type of map uses the molecular location, a precise description of a gene's position on a chromosome. The molecular location is based on the sequence of DNA building blocks (base pairs) that make up the chromosome.

Geneticists use a standardized way of describing a gene's cytogenetic location. In most cases, the location describes the position of a particular band on a stained chromosome (Fig 3):

It can also be written as a range of bands, if less is known about the exact location:

The combination of numbers and letters provide a gene's "address" on a chromosome. This address is made up of several parts:

· The position of the gene on the p or q arm. The position of a gene is based on a distinctive pattern of light and dark bands that appear when the chromosome is stained in a certain way. The position is usually designated by two digits (representing a region and a band), which are sometimes followed by a decimal point and one or more additional digits (representing sub-bands within a light or dark area). The number indicating the gene position increases with distance from the centromere. For example: 14q21 represents position 21 on the long arm of chromosome 14. 14q21 is closer to the centromere than 14q22.

An allele is one of two or more variant forms of a gene at a particular locus, or location, on a chromosome (Fig 2). Different alleles (Gr. allelon = "of one another") produce variation in inherited characteristics such as hair color or blood type. In an individual, one form of the allele (the dominant one) may be expressed more than another form (the recessive one).

Gene expression is the process by which proteins are made from the instructions encoded in DNA.

A genome is all the DNA contained in an organism or a cell, which includes both the chromosomes within the nucleus and the DNA in mitochondria. Each parent, through its reproductive cells, contributes its genome to its offspring. Genomics is the branch of genetics concerned with the study of genomes.