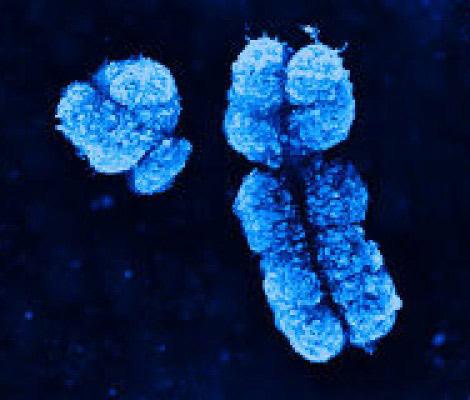 A sex chromosome is one of the two chromosomes that specify an organism's genetic sex. Humans have two kinds of sex chromosomes, one called X and the other Y; these also carry some genetic information not related to sex determination.

Sex chromosomes are inherited (see heredity) in the same way as the other 22 human chromosome pairs, normal persons being either XX (female) or YY (male). The Y chromosome carries little genetic information and it is largely the properties of the X chromosome that determine "sex-linked" characteristics in males. Sex-linked characteristics include hemophilia and color blindness, which are carried as recessive genes in females.

A nomal human male has one X- and one Y-chromosome in his body cells, and his sperm cells are haploid, containing either an X- or a Y-chromosome. The Y-chromosome is smaller than the X-chromosome and contains fewer genesa>.