Visible light and the electromagnetic spectrum.

Top left: Additive mixing of light of the three primary colors – red, blue, and green. Mixture of two of these gives rise to the secondary colors – cyan, magenta, and yellow; mixture of all three gives white light. Top right: Color by subtraction from white light by cyan, magenta, and yellow pigments. Where the effects of two pure pigments are combined, primary color effects are reproduced; combination of all three yields a black effect. 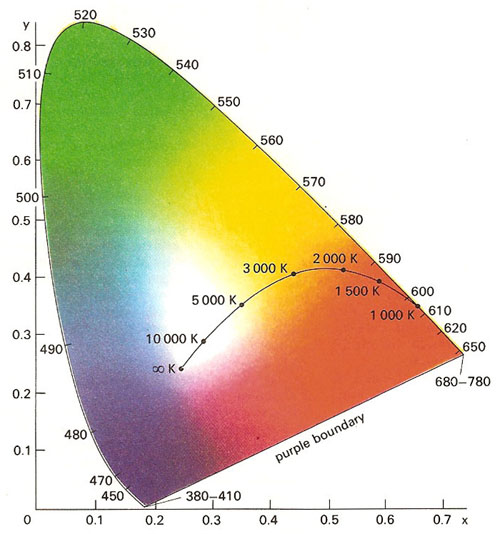 The chromaticity diagram seeks to describe colors in terms of rectangular x and y coordinates. The pure spectral colors are ranged along the upper edge of a diagram, their wavelengths indicated in nanometers (nm). The colors displayed by sources of blackbody radiation at different temperatures (in kelvin) lie along a line that extends into the center of the diagram. The light from such sources can thus be described in terms of its color temperature.

The standard four-color printing process. The original picture is photographed through color filters and four printing plates are produced: one for printing with cyan (process blue) ink, one for magenta (process red), one for process yellow, and one for black (for reducing the brightness where necessary). Each of these plates is screened as in the halftone process, but the dots produced are carefully oriented so as neither to clash nor give rise to moiré patterns. The combination of the subtractive effects of the four printings yields a full-color effect. Here the four printings which are used to reproduce the chromaticity diagram above are reproduced separately, side by side, and at a reduced scale. Although the four-color printing process does reproduce color effects reasonably well, it does not allow all colors to appear accurately. Royal blues, for instance, are particularly difficult to reproduce accurately. 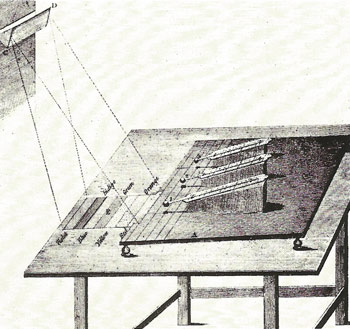 Dispersion of light by a prism produces a spectrum of colours. In 1800 the British astronomer William Herschel placed thermometers just beyond the red end of the spectrum and observed a rise in temperature. He deduced that the prism was dispersing invisible heat rays (now called infrared rays). 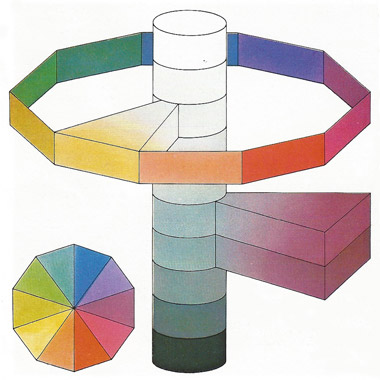 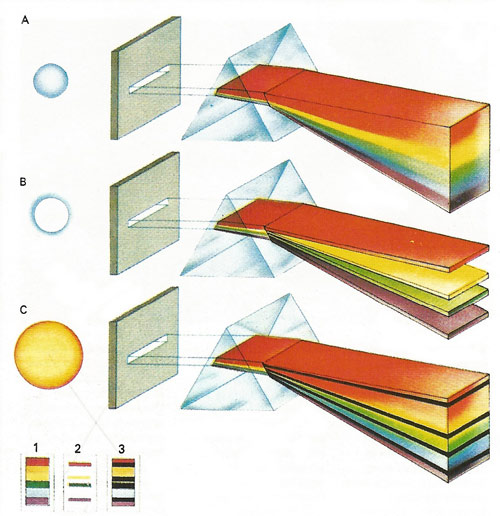 How primary and secondary rainbows form.

Color is a subjective quality that depends partly on the vagaries of the human visual system and the way the brain interprets the wavelength distribution of the light entering the eye. The phenomenon of color has two aspects: the physical or optical – concerned with the nature of the light – and the physiological or visual – dealing with how the eye sees color.

The light entering the eye is either emitted by or reflected from the objects we see. Hot objects emit light with wavelengths occupying a broad continuous band of the electromagnetic spectrum, the position of the band depending on the temperature of the object – the hotter the object, the shorter the wavelength emitted (see blackbody radiation). We tend to think of the spectrum of visible light in terms of the band of colors revealed by Isaac Newton when he split up a beam of sunlight using a prism; in these terms, the shorter the wavelength, the bluer the light.

Other objects emitting light do so either at particular wavelengths or in narrow bands. Where these emission bands fall within the visible spectrum, such objects appear colored, otherwise black. Objects reflecting diffuse light appear colored by virtue of combined scattering and absorption effects, though the nature of the light source is also important.

The eye can only see color when the light is relatively bright; the rods used in poor light see only in black and white. For this reason most stars in the night sky appear white. Blues, red, and yellows are only evident in the case of some of the brighter stars (and planets), or with the aid of binoculars or a telescope.

The cones used in color vision are of three kinds, responding to light from the red, green, or blue portions of the visible spectrum. The brain adds together the responses of the different sets of cones and produces the sensation of color. The three colors to which the cones of the eye respond are known as the three primary colors of light. By mixing different proportions of these three colors, any other color can be simulated, equal intensities of all three producing white light. This is known as the production of color by addition, the effect being used in color television tubes where phosphors glowing red, green, and blue are employed.

Color pigments, working by transmission or reflection, produce color by subtraction, abstracting light from white and displaying only the remainder. Again a suitable combination of a set of three pigments – cyan (blue-green), magenta (blue-red), and yellow (the complementary colors of the three primaries) – can simulate most other colors, a dense mixture of all three producing black. This effect is used in color photography but in color printing an additional black pigment is commonly used.

Complementary colors are any two colors that combine to make white light. Any color can be described in terms of the combination of red, green, or blue (the "additive" primary colors) that has the same effect on the eyes. Since red, green, and blue in the right proportions add to make white, it follows that the complementary colors of red is blue-green (cyan), of blue is yellow (which is produced by red and green combined), and of green is magenta (red-blue). In painting, combinations of colors get darker, not lighter. It remains true, however, that complementary colors tend to neutralize each other.

Most colors are not found in the spectrum. These non-spectral colors can be regarded as intermediate between the spectral colors and black and white. Many schemes have been proposed for the classification and standardization of colors. The most widely used is that of Albert Henry Munsell which describes colors in terms of their hue (basic color), saturation or chroma (intensity or density), and value (the degree of lightness or brightness). Hue is denoted by its place on the circumference of the tree; chroma by its distance from the trunk; value by its place up the trunk.

A quantitative system is needed for scientific purposes and for this the color index is used.

A solid or plasma under pressure heated to incandescence emits a continuous spectrum [A, see diagram to right]. At low pressure a gas produces an emission spectrum [B]. In the Sun [C], light from the inside [1] is partly absorbed as it passes through the outer regions [2] to form an absorption spectrum [3].

A rainbow is a natural demonstration of the mixture of colors, or wavelengths that make up white light.

Drops of moisture in the atmosphere act as prisms, dispersing the light into its component colours. The observer sees the various colors of the spectrum emerging from many droplets. The completeness of the rainbow he sees depends on his position between the Sun and the drops of moisture and on his horizon; from aircraft at high altitudes a circle can be seen.

Sometimes two rainbows are visible: an inner – called a primary bow – and a larger outer one, or secondary bow. The colors are in opposite sequence in the two rainbows. In the primary (top illustration below), light is dispersed on entering a rain-drop, and the colours reflected from the back of the drop towards the observer. Some rays may be reflected twice within the drop (bottom illustration below) to produce a reversal of the colours in the secondary.

The spectrum of visible light is only a small part of the much greater spectrum of all electromagnetic radiation. Beyond the blue end lie the invisible ultra-violet rays, X-rays and gamma-rays, while infrared rays (heat rays), microwaves and radio waves lie beyond the red end. All electromagnetic radiation had the power to penetrate matter to a certain extent. High frequency radiation – that is, X-rays and gamma-rays – penetrates most.

So-called color charge, or simply color, which is a concept in particle physics, has nothing to do with the color perceived by the human eye.

Color blindness is the inability to discriminate between certain colors and is an inherited trait. Color blindness is a disorder of the cone cells in the retina of the eye. The commonest form is red-green color blindness (Daltonism), usually found in men (about 8%), the other types being rare.