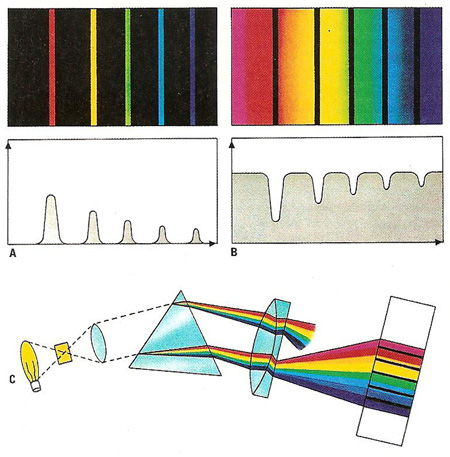 In optics, a spectrum is a plot of the intensity of electromagnetic radiation radiation at different wavelengths; in the case of visible light, this is the familiar rainbow of colors. An object that emits radiation in a continuous range of colors is said to have a continuous spectrum. An object that emits radiation only at certain wavelengths is said to have emission lines; objects that absorb radiation only at certain wavelengths are said to have absorption lines. A good spectrum of a star, for example, reveals, among other things, its spectral type, radial velocity, and metallicity.

In quantum mechanics, a spectrum is the set of allowed energy levels of a particle or system. It is directly related to bright or dark lines in a spectrum of light produced by a prism.

In mathematics, a spectrum is the set of eigenvalues of a linear transformation. By historical coincidence, it is equivalent to the notion of a spectrum in quantum mechanics.