An absorption spectrum with dark absorption lines corresponding to specific wavelengths at which light is absorbed. 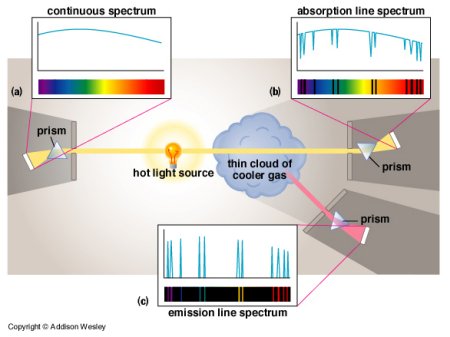 Every chemical element has absorption lines at various specific wavelengths corresponding to the differences between the energy levels of its orbitals. Absorption spectra can therefore be used to identify elements present in a gas or liquid. This method is used in deducing the presence of elements in stars and other gaseous objects which cannot be measured directly.

The pattern of absorption lines in a spectrum is diagnostic of the types of atoms and molecules present, for example, in the surface layers of a star or the atmosphere of a planet. Absorption lines are seen in the spectra of the Sun and other stars. Most of them are Fraunhofer lines but some arise in the cool interstellar gas along the line of sight and give clues to the physics and chemistry of the interstellar medium. Absorption lines in quasars carry information about intergalactic space.

An absorption band is a series of very closely spaced absorption lines resulting from the absorption of light by molecules. Bands caused by titanium dioxide and carbon compounds occur in the spectra of low temperature stars (see M stars), including red giants. So-called diffuse interstellar bands, most likely due to complex carbon molecules, are observed in the spectra of remote stars.


How an absorption spectrum is formed

Atoms and molecules may change states when they absorb specific amounts of energy. Atomic states are defined by the arrangement of electrons in atomic orbitals. An electron in some orbital may be excited to a more energetic orbital by absorbing exactly one photon which has energy equal to the energy difference of the two orbitals.

Molecular states are defined by the molecule's modes of vibration and rotation. These vibrational and rotational modes are quantized, similar to the atomic orbitals, and may be excited by absorbing single photons.

When this decay occurs, the photon produced is not necessarily emitted in the same direction as the original photon. The most common angle of this has been shown to be about 45 degrees of the original photon. This applies to any situation where gases lie between a light source and an observer: the observer will see gaps in the spectrum of the light corresponding to the wavelengths of the photons which were absorbed. These gaps occur despite the re-emission of photons because the re-emitted photons are equally likely to travel in all directions, and it is statistically unlikely to travel along the original path to the observer. These gaps appear as black lines in an image of the spectrum.