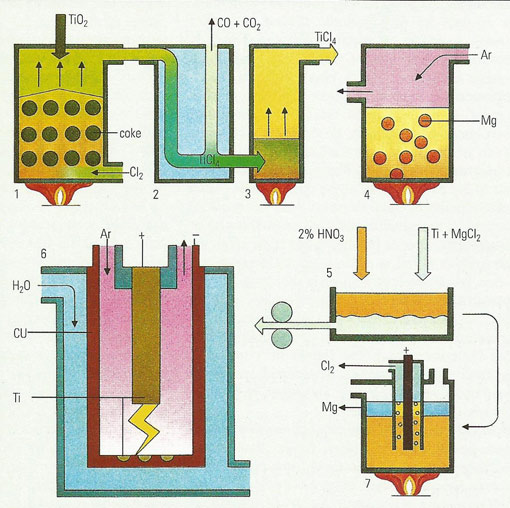 Titanium is extracted almost exclusively from rutile (TiO2), heated with coke in an atmosphere of chlorine (Cl2) in a brick-lined chimney (1) to produce titanium tetrachloride (TiCl4). The vapor is condensed (2) and purified by distillation (3). Heating in the Kroll furnace (4) under argon (Ar) with fused magnesium (Mg) produces a titanium "sponge", Ti, and magnesium chloride (MgCl2). The magnesium chloride is removed (5) by leaching with 2% nitric acid (HNO3). The titanium is pressed into electrodes and melted under argon in a consumable-arc furnace (6) to improve the product density. The water-cooled, copper jacket of the furnace does not react with the titanium, unlike other processes in which side reactions nearly always occur. The consumable arc furnace was developed especially to cater for metals, such as titanium, which are extremely reactive with, for example, oxygen at temperatures well below their melting points. The process is repeated to ensure that the product is of uniform quality. The leached magnesium chloride is fused and electrolyzed in a Dow furnace to produce the elements for recycling (7). Titanium is used to make very tough alloys with steel for the aerospace, toolmaking, and automotive.

Titanium (Ti) is a hard, silver-gray metallic element in group IVB of the periodic table; it is a transition element. Titanium occurs naturally in the minerals rutile (an impure form of titanium dioxide) and ilmenite (a mixture of oxides of titanium and iron), from which it is extracted by conversion to titanium (IV) chloride and reduction by magnesium. It is the 9th most common element in the Earth's crust. The metal and its alloys are strong, light (titanium is about as strong as steel but 45% lighter), and corrosion- and temperature-resistant, and, although expensive, are used for construction in the aerospace industry.

In 1791, the Reverend William Gregor, an English clergyman and mineralogist, reported that he had discovered a magnetic black sand near the beaches of Cornwall, England. The mineral was named menachanite after the local parish of Menaccan. A few years after Gregor's discovery, Martin Klaproth, a German chemist, separated titanium dioxide (TiO2) from the mineral rutile. Klaproth named the new element titanium after the giants of Greek mythology. In 1825, Jöns Berzelius performed a crude separation of titanium metal. However, it was not until 1910 that M. A. Hunter, an American chemist, produced pure titanium. W. J. Kroll patented his method for producing titanium metal in 1938. Coincidently, commercial production of titanium metal and titanium dioxide pigment began in the 1940s.

Titanium (IV) oxide (TiO2) is used as a white pigment in paints, ceramics, glass, paper, and cosmetics. It occurs naturally as the mineral rutile, from which it is extracted by chlorination. It can be extracted from ilmenite by crushing the ore and dissolving out the titanium with concentrated sulfuric acid. When the solution has been boiled down and cooled, the iron also dissolved crystallizes out and can be separated. Concentrating the liquid even further brings out the titanium as hydrated crystals if titanium sulfate. These crystals are filtered out and washed before being fed into a rotary furnace where sulfurous gases are driven off, leaving behind impure particles of titanium dioxide. After purification and grinding to the right size they are ready to be mixed with paper pulp or paint.

Titanium (IV) chloride (TiCl4) finds use as a catalyst.