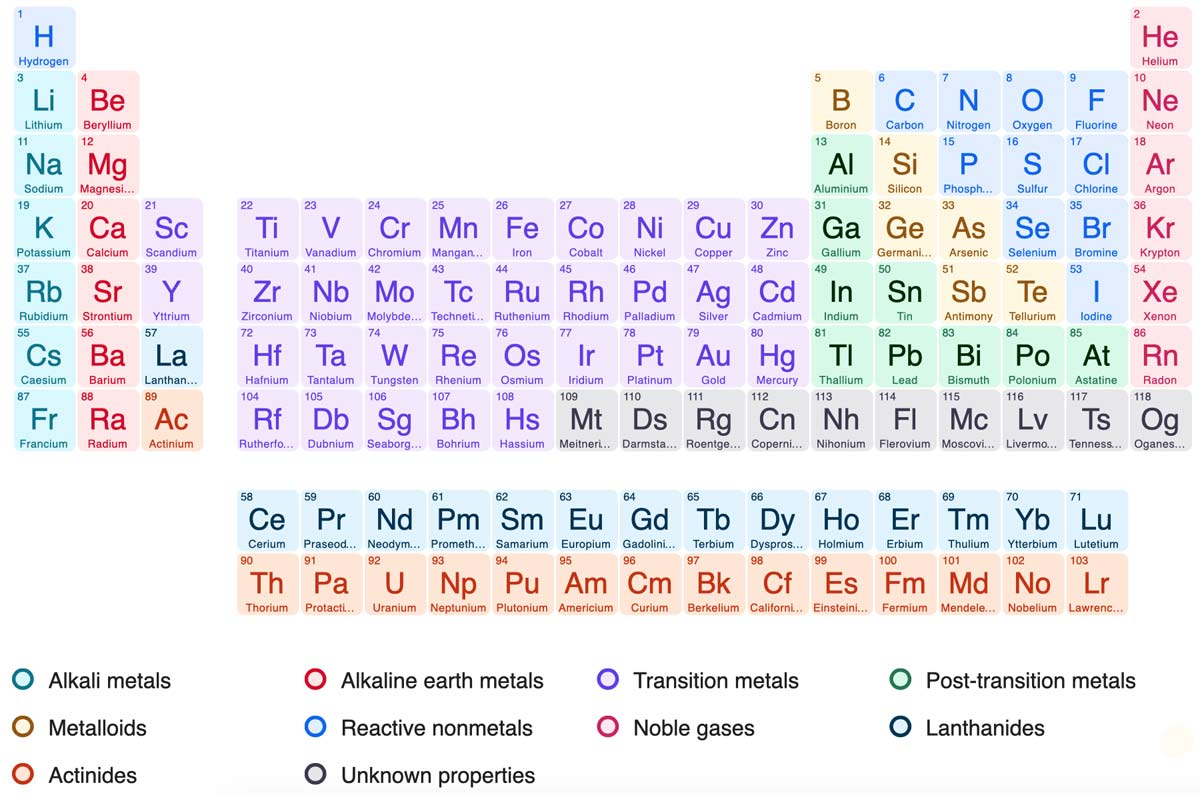 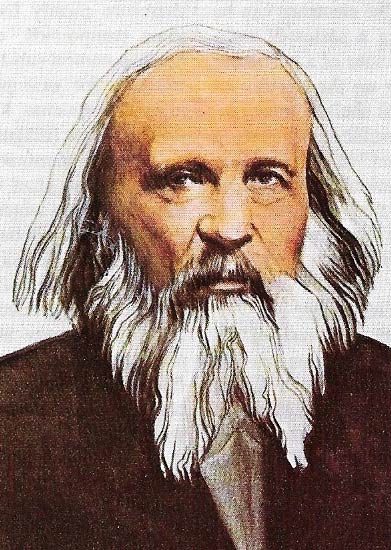 The Russian chemist Dmitry Mendeleyev was responsible for proposing the periodic table of the elements in 1869. This major theoretical breakthrough provided the necessary classification system for making the similarities in the properties of certain elements understandable. Mendeleyev was born in Siberia in 1834 and trained as a teacher in St Petersburg. Subsequently he became professor of chemistry at St Petersburg University, a post which e held until 1890. He died in 1907.

The periodic table is a table of the elements in order of atomic number, arranged in rows and columns to illustrate periodic similarities and trends in physical and chemical properties. The different rows of elements are called periods. The period number of an element signifies the highest energy level an electron in an atom of that element occupies (in the unexcited state). The number of elements in a period increases as one moves down the periodic table because as the energy level of the atom increases, the number of energy sub-levels per energy level increases.


Early work on arranging the elements

In the early years of the 19th century some form of classification of the elements began to emerge. In 1800 only 33 chemical elements had been isolated, but during the next 60 years this total was almost doubled. With the discovery of more elements it became obvious that some of them, notably the alkali metals (lithium, sodium, and potassium) and the halogens (fluorine, chlorine, bromine, and iodine) were in some way related since the elements in each group have similar properties. However, such a classification did not accommodate all the elements. This was partly because certain members of some of the families had not been isolated and also because in some groups the resemblance between individuals is only slight.

There was, therefore, a need for a more positive means of classification, perhaps based on measurements which would yield numerical values. The discovery and development of new materials during the 19th century contributed to better scientific apparatus and made possible more accurate experimental results. Thus, before the introduction of rubber tubing in the 1840s connections between pieces of apparatus could only be made with glass, pottery, metal, or fibers. As a consequence, joints tended to leak, and results were unreliable.

As such improved apparatus and more accurate instruments became available, chemists and workers in other branches of science were not only able to extend their studies but also to consolidate previous knowledge by repeating measurements in an attempt to obtain more accurate and reliable results.

It was against this background that Stanislao Cannizzaro, Jean Baptiste Dumas, J. S. Stas (1813–1891) and others set out in the 1850s to determine afresh the atomic weights (see relative atomic mass) of the known elements. The atomic weight of an element used to be taken as the number of times one atom of it is heavier than an atom of hydrogen. (The standard upon which atomic weights are based has since been modified. All measurements are now related to the atomic weight of carbon isotope 12 as exactly 12 mass units.)

While studying the revised value for the atomic weights, John Newlands, a British industrial chemist, realized that there was some correlation between atomic weights and the chemical properties of the elements. In 1865 he arranged the known elements in ascending order of their atomic weights and noticed that "the eighth element, starting from the given one, is a kind of repetition of the first." This, in his table, fluorine is No. 8, chlorine No 15, and bromine No. 29. Newlands likened this repetition to the octaves of the musical scale, and his deduction relating to the periodic repetition of similar elements became known as the law of octaves.

In 1869 the Russian chemist Dmitri Mendeleyev and Julius Lothar Meyer, a German, published somewhat similar periodic tables independently. They arranged the elements according to their atomic weights, in much the same way as Newlands had done, but both of them had the foresight to recognize the possibility of their being further elements still to discover. Accordingly they left gaps in the table for unknown elements, and in this way were able to accommodate elements with similar properties in the same column.

The form of Mendeleyev's table of 1869 has been followed closely in the modern table. The elements were arranged in short sequences with similar ones underneath each other.

Not only did Mendeleyev leave gaps in the table for new elements. He also deduced their more important properties from the properties of adjacent elements in the table. As is often the case with new ideas, chemists were at first skeptical of this classification. Their attitude changed when the element gallium was discovered in 1875 and was found to have the properties which Mendeleev had predicted.

Modern understanding of atomic structure has shown that the numbers and arrangement of the electrons in the atom are responsible for the periodicity of properties; hence the atomic number, rather than the atomic weight, is the basis of ordering. Each row, or period, of the table corresponds to the filling of an electron shell; hence the numbers of elements in the periods is 2, 8, 8, 18, 18, 32, 32. (There are n2 orbitals in the nth shell). The elements are arranged in vertical columns or groups containing those of similar atomic structure and properties, with regular gradation of properties down each group.

The longer groups, with members in the first three (short) periods, are known as the main groups, usually numbered IA to VIIA, and 0 for the noble gases. The remaining groups, the transition elements, IIIB to VIII (a triple group), IB, and IIB. The characteristic valence of each group is equal to the number N, or to (8 - N) for some non-metals.

Two series of 14 elements each, the lanthanides and the actinides, form a hyper-transition block in which the inner f orbitals are being filled; their members have similar properties, and they are usually counted in group IIIB.

In recent years, several claims have been made by laboratories for the discovery of new chemical elements at positions 113, 114, 115, 116 and 118 on the periodic table. In June 2011, a joint working party of the International Union of Pure and Applied Chemistry (IUPAC) and the International Union of Pure and Applied Physics (IUPAP) concluded that elements 114 and 116 fulfilled criteria for official inclusion in the table. The others, as yet, do not. The new elements have been temporarily named ununquadium and ununhexium and are awaiting final names.