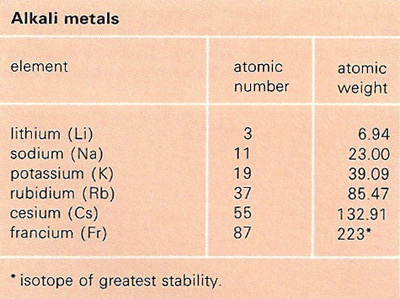 An alkali metal is any of the six elements: lithium (Li), sodium (Na), potassium (K), rubidium (Rb), cesium (Cs), and francium (Fr). The alkali metals are found in group 1A of the periodic table of elements. They all form singly-charged positive ions, are highly electropositive, and are extremely reactive.

The reactivity of alkali metals increases going down the group; thus, cesium and francium are the most reactive and lithium is the least. The first ionization energy decreases from 520 kJ mol-1 (lithium) to 380 kJ mol-1 (cesium). Other properties also change down the group: atomic and ionic radii and density increase while melting and boiling points decrease.

All the alkali metals react with water (lithium slowly, the others violently), forming hydroxides and releasing hydrogen gas and heat. These hydroxides are strong alkalis (hence the name) and do not decompose on heating. All the alkali metals can be made to react with chlorine, bromine, sulfur, and hydrogen. The salts of alkali metals are generally soluble. The carbonates do not decompose on heating except at high temperatures. The nitrates (except for that of lithium), decompose to give the nitrite and oxygen.