Extraction of bromine from brine liquid. Chlorine is passed into the brine and replaces chlorine from the bromide salts. The bromine is blown out with an air blast and the bromine-laden air is mixed with sulfur dioxide. Hydrogen bromide is formed and this is mixed with chlorine which again releases bromine. This is steamed-out in the steaming out tower and passes on to the condenser. 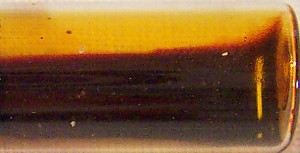 Bromine (Br) is a heavy, volatile, corrosive, reddish-brown, nonmetallic liquid element (see nonmetal), having a pungent and highly irritating vapor. Bromine is one of the halogens, and has properties intermediate between those of chlorine and iodine. It occurs as bromides, mainly in seawater, from which it is extracted by oxidation with chlorine.


To obtain bromine industrially from brine liquid, the salt is extracted from the seawater and the remaining liquor passed down a reaction tower, while chlorine gas flows up it in the opposite direction. The chlorine reacts with the magnesium bromide in the liquor:


Uses of bromine and bromides