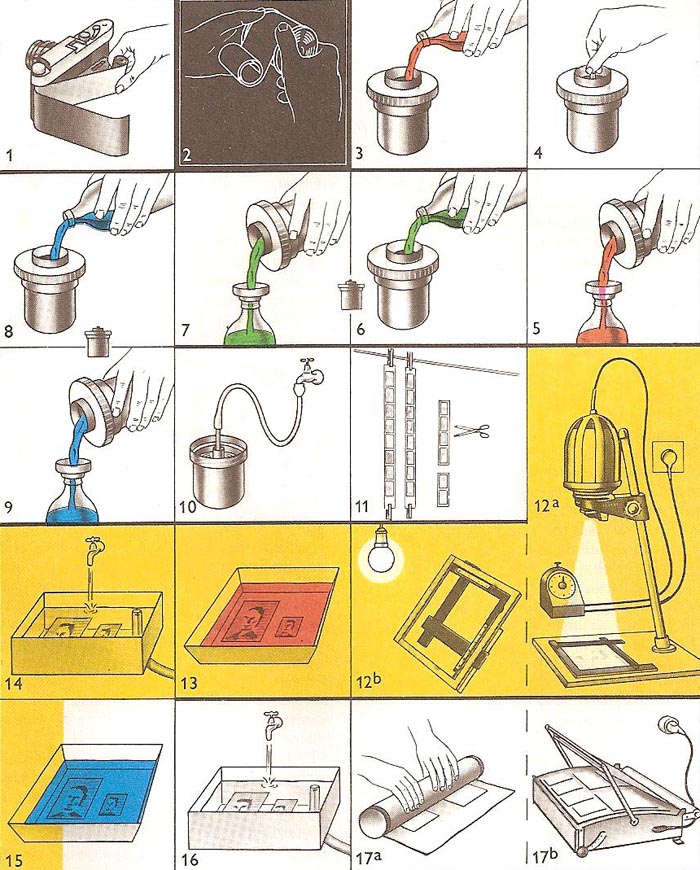 Fig 1. In photographic development and printing, the exposed film is removed from the camera (1) and, in the darkroom, is wound on to a reel (2) that fits into a light-proof tank. Steps 3 through 11 may be carried out with the lights on. The tank is filled with developer (3) and agitated during development (4). After the proper time has elapsed, the developer is poured out (5) and and the tank is filled with the stop bath (6) to halt development. The stop bath in turn is poured out (7), and the fixer is poured in (8) and removed after a specified time (9). The negative is then washed (10) and dried (11). To make enlargements, light is shone through the negative in the enlarger (12a) onto sensitive paper. Alternatively, the paper can be exposed directly with both held together in a frame (12b – "contact" printing). using red light, the photographer develops the prints (13), washes them (14) – sometimes after using a stop bath – and fixes them (15). The prints are then washed again (16) and dried by hand (17a) or in a dryer (17b). 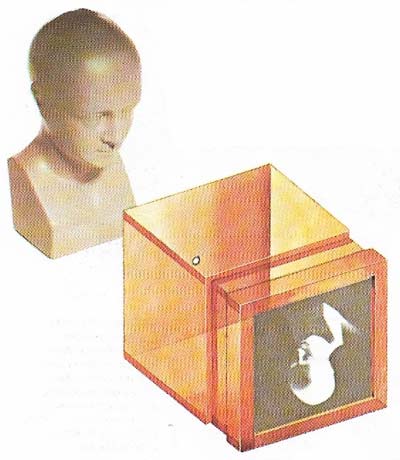 Fig 2. In a pinhole camera an image forms through the hole on to the other side. It is not very bright but can make a picture on a film placed in the right position. 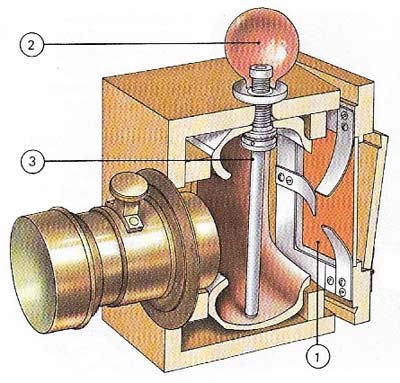 Fig 3. A lens gives a brighter image than a pinhole. This 1864 camera had a rubber bulb (2), which fed silver nitrate along the tube (3) to sensitize a plate in the holder (1). 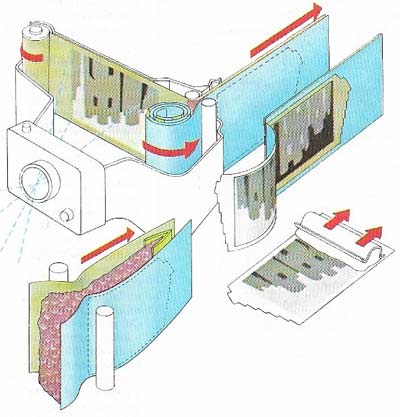 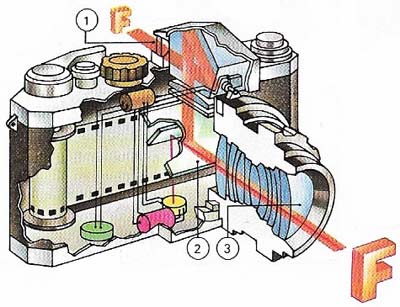 Fig 5. The single-lens reflex is a versatile camera design. The view-finder (1) reveals an image formed via a mirror (2) by light from the main lens (3), showing exactly what is being focused upon. 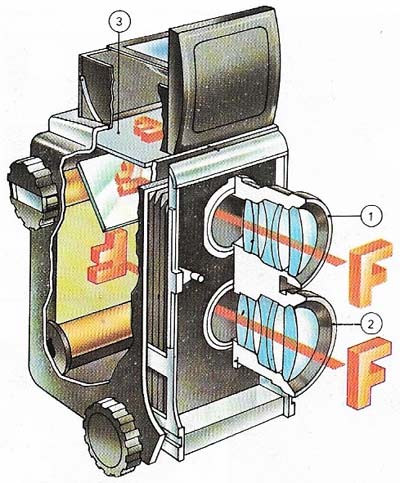 Fig 6. The twin-lens reflex camera is really two cameras one for focusing and view-finding (1) and one for photography (2). The lenses focus with a focusing screen (3). 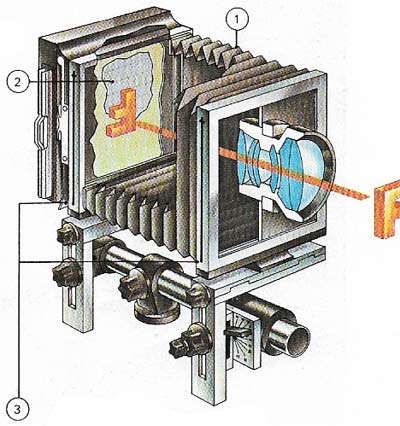 Fig 7. The technical camera does not have a view-finder. The image is focused by means of bellows (1) on a ground-glass sheet (2) at the back. Just before exposure this is replaced by a piece of film held in a dark slide. The front and back panels can both be tilted, shifted, or swiveled independently (3). This allows the professional photographer to manipulate subject angled and planes of sharp focus. It is ideal for static subjects.

Fig 8. A black-and-white film is processed by immersion in a suitable developer (1). The image is then washed (2) and made permanent by "fixing" (3), and the negative is washed again (4) and dried (5).

Fig 9. To make a print, light-sensitive paper is exposed to a same-size or enlarged image of the negative (1) then processed as is a film (2-6). The paper is not as sensitive as film.

Fig 10. The processing chemicals are spread on to Polaroid film as it is pulled from the camera (1). After 15 seconds (2) the paper print is removed (3) from its negative. Fixer may be brushed on (4). 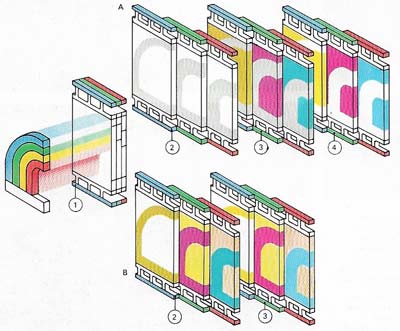 Fig 11. Color films have three layers sensitive to blue, green, and red light respectively; each forms a latent image on exposure (1). (A) Most transparency film is first developed to a black-and-white negative (2). All remaining silver halide is then exposed and color developed. Now the film is opaque, as all silver has been blackened (3). The silver is bleached out leaving a naturally colored dye image (4). (B) Dyes form in the first development of color negatives (2). After bleaching the negative image is in complementary colors (3), and it also has residual yellow and orange dyes. This ensues the correct colors in the subsequent printing process. 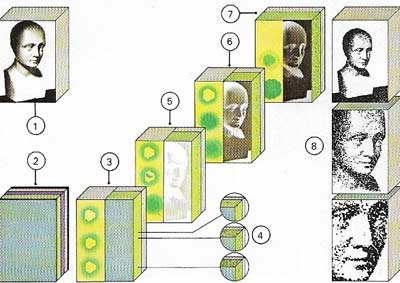 Fig 12. When light falls (1) on the light-sensitive emulsion of a film (2) it forms a latent image (3). Grains of silver halide are slightly altered; the more light reaching the film, the more grains area affected (4). In developer the grains are converted back to black metallic silver. At first a few are changed (5); later a denser image forms (6, 7) consisting of clumps of silver grains (8). 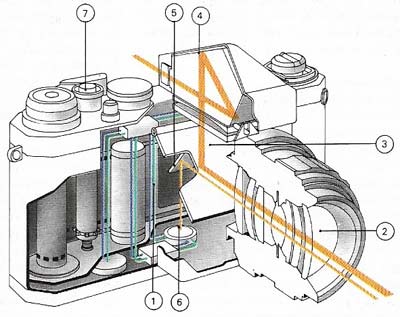 Fig 13. When the shutter (1) is released light reflected from a scene is focused on to film. Before the photo is taken, light entering the lens (2) is split along two paths. Most is reflected upwards from a mirror (3) into a view-finder (4). A little is either reflected downwards from a smaller mirror (5) into the photoelectric cell of an exposure meter (6), or directed to a cell in the base of the view-finder. The release (7) opens the shutter.

Analog photography is the use of light-sensitive materials to produce permanent visible images (photographs). The most familiar photographic processes depend on the light-sensitivity of the silver halides (Fig 1). A photographic emulsion is a preparation of tiny crystals of these salts suspended in a thin layer of gelatin coated on a glass, film, or paper support. On brief exposure to light in a camera or other apparatus, a latent image in activated silver salt is formed wherever light has fallen on the emulsion. This image is made visible in development, when the activated silver halide crystals (but not the unexposed ones) are reduced to metallic silver (black) using a weak organic reducing agent (the developer). The silver agent is then made permanent by fixing, in the course of which it becomes possible to examine the image is light for the first time. Fixing agents (fixers) work by dissolving out the silver halide crystals which were not activated on exposure. The image made in this way is densest in silver where the original subject was brightest, and lightest where the subject was darkest; it is thus a "negative" image. To produce a positive image, the negative (which is usually made on a film or glass (plate) support) is itself made the original in the above process, the result being a positive "print" usually on a paper carrier. An alternative method of producing a positive image is to bleach away the developed image on the original film or plate before fixing, and re-expose the unactivated halide in diffuse light. This forms a second latent image which on development produces a positive image of the original subject (reversal processing).

"Photography" comes from Greek words meaning "writing with light". The first photograph was taken by Nicéphore Niépce (1765–1833) in 1826 in a "camera obscura". This was a small dark room with a lens let into one wall: the scene outside was projected on to the opposite wall. It took about eight hours to expose a pewter plate covered with chemicals that reacted to light. In 1837, a Frenchman, Louis Jacques Mande Daguerre (1789–1851), invented the daguerreotype process in which silver-plated copper sheets treated with iodine vapor replaced Niépce's pewter plate.

Development of the latent image (the picture held invisibly in the chemicals) required treatment with mercury vapor. The visible image produced was reversed, with the black parts white and the white parts black. The process became popular, but produced only one picture at a time. The multiple prints of today were impossible until William Fox Talbot (1800–1877) developed the negative in 1839. But his calotype (later talbotype) was not as clear as the daguerreotype.

Talbot's paper negatives could be made transparent by wax or oil. They were soon replaced by glass negatives and in 1861 the first color process was demonstrated.

In 1888 George Eastman (1854–1932) introduced the Kodak camera and roll film, thus bring photography to the man in the street. In 1924 the Leica was introduced as a miniature camera originally designed for testing 35 mm motion picture film, and in 1925 the invention of the flash bulb released photography from dependence on sunlight or special artificial lighting.

The silver halides themselves are sensitive to light only from the blue end of the spectrum so that in the earliest photographs other colors appear dark. The color-sensitivity of emulsions was improved from the 1870s onward as small quantities of sensitizing dyes were incorporated. "Orthochromatic" plates became available after 1884 and "panchromatic" from 1906.

The modern analog camera (Fig 13) is a light-tight box with a mechanism that holds a piece of film flat and opposite a lens. The lens focuses on to the film a sharp upside-down image of the scene before the camera. A shutter, situated between the film and the lens, stops light reaching the film until the user decides to take a photograph. It then opens, usually for only a fraction of a second. The correct exposure is obtained by regulating the relationship between the shutter speed and the diameter of the lens – a factor that can be varied by adjustment of a diaphragm.

The diaphragm controls the amount of light passing through the lens and the shutter determines how long the film is exposed to the light. A fast shutter speed and a wide diaphragm opening will give the equivalent exposure of a slow shutter speed and a small opening. All cameras have a viewfinder – from a simple wire frame to a complex optical system – that enables the user to see what the camera "sees".

These features are common to all cameras, but there is great variation in their complexity and operation. The simplest cameras have a single shutter speed and fixed diaphragms, both so chosen that on a sunny day the correct amount of light is admitted. Complex cameras, designed to take perfect photographs in all kinds of lighting conditions, have shutters with a wide variety of speeds, from hours to perhaps 1/2000th of a second; lenses that can admit a much greater amount of light (and still focus precisely and clearly); and built-in accessories of many kinds.

Generally the principal built-in accessory is an electronic exposure meter, which can automatically adjust shutter and diaphragm to the correct relationship. In many miniature (and some other) cameras the shutter is not built into the lens, or set just behind it, but lies almost against the film. These shutters are known as focal-plane shutters.

Film may be cut into sheets, loaded into a light-tight cartridge or cassette, or wound (backed with paper) on to a metal spool. It is thin transparent plastic coated with a photographic emulsion made of grains of silver salts suspended in gelatin. The grains are relatively large in highly sensitive (fast) film and small in slow film. Correct exposure is affected by film speed as well as by shutter speed and diaphragm opening.

The latent image formed on the film (Fig 11) is made visible and permanent by chemical processing in four main stages – developing, stopping development, fixing, and washing. With negative film, developers darken the film in proportion to the light that reached it, so that the brighter parts of the scene that was photographed appear dark. In color negative film (Fig 12) the colors of the original subject are also reversed, each color being represented by its complement. Thus yellow appears as blue and red as cyan.

Fixing simply removes from the emulsion all the chemicals not affected by light, leaving areas of clear film. These portions print black in the final photograph. A "stop bath" between developer and fixer stops development at the correct point. Washing removes unwanted fixer, which would otherwise eventually spoil the negative. The printing process (Fig 9) is identical, except that light-sensitive paper is used (although film may be used if the photograph is to be projected).

Motion picture photography dates from 1890, when Thomas Edison built a device to expose Eastman's roll film, and motion pictures rapidly became an important art form. Not all modern analog photographic methods employ the silver-halide process; xerography and the blueprint and ozalid processes work differently. False-color photography and the diffusion process used in the Polaroid Land camera (invented by Edwin Land) are both developments of the silver-halide process.