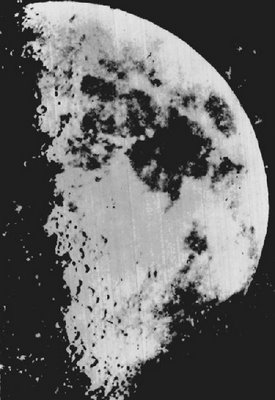 Earliest surviving daguerreotype of the Moon, taken by John Adams Whipple in 1851.

The daguerreotype was the first practical photographic process, invented in the late 1830s by the French theatrical designer Louis Jacques Mandé (1789–1851) and widely used in portraiture until the mid-1850s. A brass plate coated with silver was sensitized by exposure to iodine vapor and exposed to light in a camera for several minutes. A weak positive image produced by mercury vapor was fixed with a solution of salt. Hypo soon replaced salt as the fixing agent and after 1840 gold (II) chloride was used to intensify the image.