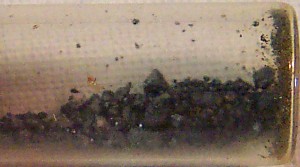 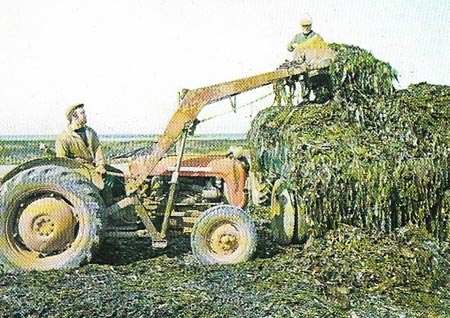 Fig 2. Iodine is present in seawater in very low concentrations (0.006%). It is concentrated by seaweeds which, botanically, are green, red, and brown algae. Iodine was first discovered in 1811 when it was extracted from the ashes of seaweed. Kelp, a ribbon-like brown alga, was one of the earliest sources. Much iodine is now obtained elsewhere, for example from Chile saltpetre and brine from oil wells, although seaweed remains a valuable source of iodine. 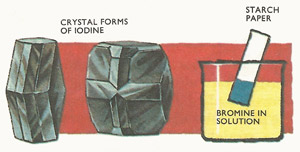 Fig 3. At normal temperatures pure iodine is a black metallic-looking solid. It can be detected in solution by the very sensitive starch test. Starch paper turns a deep blue in the presence of iodine.

Iodine (I) is a lustrous, dark gray to purplish-black, corrosive, poisonous element that is the least reactive member of the halogens (Fig 1). It readily to sublimes to a pungent violet vapor (I2 molecules). Simple solutions (e.g., in carbon tetrachloride, CCl4) are violet; solutions in which there is an appreciable charge transfer (e.g. C2H5OH, KI/H2O) are brown. Iodine reacts with other halogens (to give inter-halogen compounds), and bases (to give iodates). Chemically, iodine resembles bromine but has a greater tendency to covalency and positive oxidation states. It is large enough to form 6-coordinate oxy-anions.

Several of its isotopes are radioactive, including I-131, which is used as a tracer and in thyroid disease diagnosis and therapy. Its compounds are used as antiseptics, germicides, and in the production of dyes. Silver iodide, being light sensitive, is used in photography.

Most iodine is produced from calcium iodate (Ca[IO3]2), found in Chile saltpeter. In the US, much is recovered from oil-well brine, which contains some sodium iodide (NaI).

Iodine is essential for the formation of the thyroid hormones, triiodothyronine (T3) and thyroxine (T4). These hormones control the rate of metabolism and growth and development.

The amount of iodine in food depends on the amount contained in animal feed and the amount in the soil; shortages occur in limestone areas. Shortages can be overcome by consuming bread or table salt fortified with iodine or iodate.

Iodine compounds are used as antiseptics, in radiopaque contrast media used in some X-rays procedures and in some cough remedies.