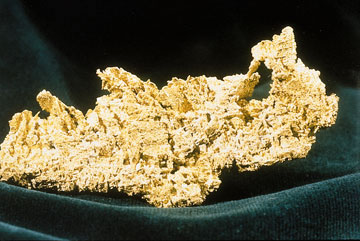 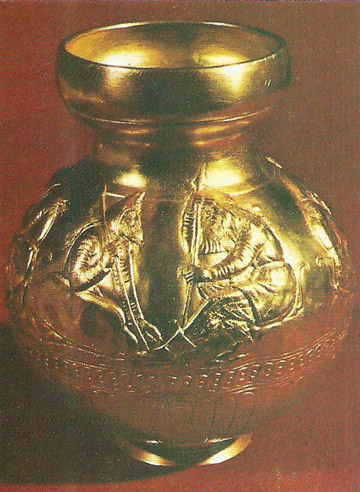 Gold has always been a symbol of material wealth and, because of its unique qualities, has been used to create art treasures of dazzling beauty, such this Graeco-Scythan vase.

Gold (Au) is a soft, bright yellow, corrosion-resistant element, one of the family of noble metals, and the most malleable and ductile metal. First found by chance, it was being mined by 3000 BC and was being chemically extracted from crushed quartz (by amalgamation with mercury) by 1000 BC. Gold is found in group IB of the periodic table and is a transition element. Gold occurs native, typically as small particles in quartz and pyrite but also as deposits after erosion of the quartz and sometimes as nuggets. It also occurs in tellurides in the same minerals. It is recovered by mining, panning, or sluicing, and is extracted with potassium cyanide in the presence of peroxide or air to give the [Au(CN)2]- ion or by forming an amalgam, and is refined with electrolysis.

Gold is not attacked by oxygen or by single alkalis or acids (except H2SeO4). It dissolves in aqua regia and in cyanide and halogen solutions and is attacked by fluorine. It forms mainly monovalent – gold (I), or aurous – and trivalent – gold (III), or auric – salts. Gold (III) chloride is used as a toner in photography. For more, see "Chemistry of gold" below.

Gold is a good thermal and electrical conductor, is generally alloyed to increase its strength, and is used as an international monetary standard, in jewelry, for decoration, in dentistry, and as a plated coating on a wide variety of electrical and mechanical components. It is also turned into thin foil, only 0.1μm thick, called gold leaf, by beating it between vellum and animal skins. Gold leaf is used for decorative gilding, lettering on leather-bound books, and for coating artificial satellites, etc., to reflect infrared radiation. Gold can also be welded in a thin layer to another metal (rolled gold).

For most uses gold is too soft, and is combined into alloys with other noble metals, the proportion of gold being measured in carats. White gold is an alloy of gold with nickel and sometimes other noble metals, used in dentistry. The number of 'carats' indicates the number of parts of pure gold in 24 parts of the alloy. for example, 9 carat gold is 9/24 pure gold 15/24 other metal.

Gold in the form of a colloid is sometimes used in coloring glass. The isotope 198Au (half-life 2.7 days) is used in radiotherapy; the most common isotope is 197Au.

Gold is an element of the copper group. Of its oxidation states, the +5 state is found only in AuF5, and hexafluoroaurates(V). The common states are +3 (generally square planar) and +1 (generally linear). Both +3 and +1 states form extensive ranges of complexes particularly with soft bases. Organometallic compounds are readily formed. Gold(II) complexes are formed with S-ligands but many compounds which are apparently Au(II) derivatives contain Au(I) and AU(II). Gold forms stable metal-metal bonds with other metals and cluster compounds, e.g., Au11I3L7 or 8 (L = phosphines) are formed on reduction.


Gold in dentistry and pharmacology

Several compounds of gold are used in the treatment of rheumatoid arthritis. Sodium aurothiomale (Myocrisin) is administered by intramuscular injection. Common side-effects include mouth ulcers, itching, blood disorders, skin reactions, and inflammation of the colon and kidneys. Auranofin is a gold compound administered orally.