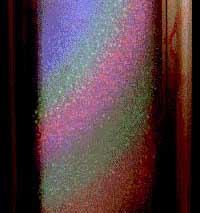 A diffraction pattern from a binary colloidal alloy crystal.

A colloid, also known as a colloidal solution or colloidal dispersion, is a system in which two (or more) substances are uniformly mixed so that one is extremely finely dispersed throughout the other. A colloid may be viewed intuitively as a halfway stage between a suspension and a solution. Familiar examples are milk, butter, paint, and ink.

In a colloid there two or more phases, with one (the dispersed phase) distributed in the other (the continuous phase). At least one of the phases has small dimensions, in the range between 1 nanometer and 1 micrometer (10-9–10-6 m). Dimension, rather than the nature of the material, is characteristic. In this size range, the surface area of the particle is large with respect to its volume so that unusual phenomena occur, e.g., the particles do not settle out of the suspension by gravity and are small enough to pass through filter membranes. Another notable property of colloids is light dispersion: it is due to the colloidal particles in the atmosphere that the sky is blue in the daytime and the sunset red.

Macromolecules (proteins and other high polymers) are at the lower limit of the colloidal particle range; the upper limit is usually taken to be the point at which the particles can be resolved in an optical microscope.

Colloidal particles may be gaseous, liquid, or solid, and occur in various types of suspensions: