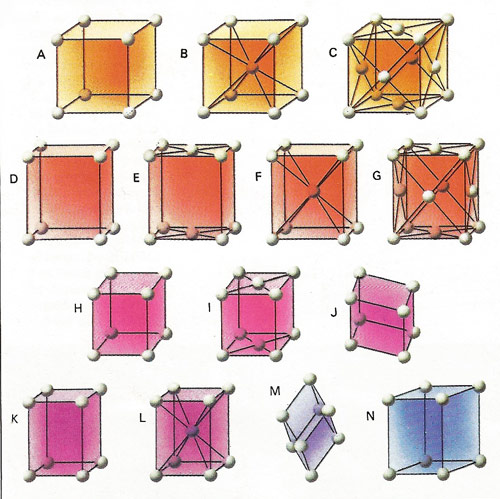 Crystals are formed by the regular stacking of identical building blocks. The elementary block is called a unit cell and may contain a single atom, such as in copper, or it may contain hundreds or thousandths of many different types, as in some protein crystals. The regularities and symmetries are a great help in identifying and solving their structure. The unit cells of all crystals can be classified into one of 14 basic types called space lattices. They are conveniently grouped into seven systems: cubic [A, B, and C] orthorhombic [D, E, F and G], mono-clinic [H and I], triclinic [J], tetragonal [K and L], trigonal [M] and hexagonal [N] Credit: U.S. National Parks Service.

Solid is the state of matter in which the constituent molecules, atoms, or ions have no translatory motion although they vibrate about the fixed positions which they occupy in a crystal lattice. A solid is said to possess cohesion, remaining the same shape unless changed by external forces. Certain solids are not crystalline; they are then said to be amorphous. A crystalline solid has a definite melting point at which it becomes a liquid. Amorphous solids have no precise melting point, but when heated become increasingly pliable until they assume the properties usually associated with liquids; they may therefore be thought of as supercooled liquids.

Solids have practically the same densities and compressibilities as liquids. In addition they have a high rigidity; under the action of small forces they do not easily change their shape.

An important property of those solids which have a well-defined melting point is that if they are formed very slowly from the liquid state they are crystalline – that is, they form shapes bounded by plane faces with characteristic angles between them. Sometimes, however, the crystalline form is not obvious, especially if the solid is not produced under suitably controlled conditions; the crystals may be too small to be seen so that the solid as a whole doesn't show the expected facets.

In crystalline solids, the molecules are arranged in regular three-dimensional patterns or lattices. If the crystal has been carefully prepared, the regular arrangement persists over distances of several thousand molecules in any direction before there is an irregularity, but if it has been subjected to strains or distortions the regular arrangement may be perfect and uninterrupted only over much shorter average distances.

In metals the ions are closely packed together, so that the distance between the center of an ion and that of one of its nearest neighbors is equal to the diameter of one ion, or something close to it. In other crystals, the packing together of the molecules may be relatively open, but even in a light solid such as ice the distance between the centers of any molecule and its nearest neighbors is only twice the diameter of a molecule. In solids, the molecules are moving with the same order of magnitude of velocity as in gases or liquids, but the motion is confined to vibrations about their mean positions.

Substances which do not melt sharply but show a gradual transition to the liquid when heated are said to be amorphous and show no trace of regularity of external shape. Amorphous solids can be described as liquids of extremely high viscosity, which over long periods of time have been "frozen" into one particular configuration.


Understanding the properties of solids

In terms of these structures, it is not surprising that solids have compressibilities and densities like those of liquids. The high rigidities can also be understood, for the molecules can only move with respect to one another with difficulty. In crystalline solids, changes of shape can only take place through molecules slipping into holes which exist at irregularities in the lattice and this is not easy. In amorphous solids, there are plenty of holes for the molecules to slip into in order to initiate a change of shape, but the bonds between neighbors cannot be easily broken by external forces acting on the solid as a whole. All solids therefore resist the action of external forces and this is just what we mean when we say they are rigid.