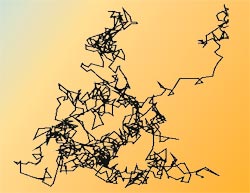 Brownian motion is the continuous random motion of microscopic particles when suspended in a fluid medium. Brownian motion was first observed (1827) by the Scottish botanist Robert Brown (1773–1858) when studying pollen grains in water. The effect was finally explained in 1905 by Albert Einstein, who realized it was caused by water molecules colliding randomly with the particles. Over a century later, Brownian motion can still cause problems for scientists trying to study small biological particles in solution, because they move around too much.

The kinetic theory of gases makes the assumption that molecules are hard, perfectly elastic little spheres, much like steel ball-bearings – except that these are not perfectly elastic. There are about 26 million trillion such molecules to a cubic centimeter of air. They move around rapidly and chaotically, and their energy of motion or kinetic energy is proportional to what a thermometer measures as the temperature of the gas. The gas molecules communicate their energy to the molecules of mercury in the thermometer and the higher energy mercury molecules then take up more space. Gases are heated up by bringing a bunch of faster moving molecules – (i.e., a gas at a higher temperature) and letting them loose among the more sluggish ones. The sluggish molecules are speeded up when they are bombarded by fast moving ones. In doing so the fast moving molecules are slowed down a little, and the average kinetic energy of the two gases becomes the same, i.e. they come to be at the same temperature, somewhere between the two temperatures.

When one of the molecular bullets hits the wall of a container it exerts a force on the wall – exactly as a ball thrown at an open door exerts a force and will slightly move it. All the rebounds of the molecules add together and make up the pressure of the gas. If the volume of the vessel containing the gas is halved the number of impacts per second will be doubled, so the pressure will also double. This is the explanation of Boyle's law which states that pressure × volume = constant.

If no heat was lost to the outside, the motions of all the molecules would continue because they are perfectly elastic and they do not lose any energy by collision. Ball bearings or billiard balls set flying about on a billiard table quickly lose their energy because of friction and also because they are not nearly elastic enough to keep going.

Though at any instant the speeds, and consequently the energies, of the molecules will be different, their average energies taken over a period of time must be the same. This is called the equipartition of energy. No single molecule could retain a large amount of energy for any length of time as it would suffer too many collisions. Since kinetic energy equals ½ mass × (velocity)2 heavier molecules with equal energies must have slower speeds since they have a larger mass. A small particle such as a smoke particles floating about in the gas will be bombarded in every direction by the molecular bullets. This particle will behave exactly as if it was a very large molecule. It will move around just like the other molecules. Its energy will be neither less than, nor greater than the energy of the molecules around it, but will be equal to their average kinetic energy in accordance with the equipartition of energy. The molecules are light and move very fast. The particle is heavy, so in order to have the same average kinetic energy it must move relatively slowly. Its motion is a slow moving version of the molecular world.

The movement of particles like this surrounded by rapidly moving molecules in gases or liquids are Brownian motion or Brownian movement.

In 1829, the Scottish botanist Robert Brown noticed tiny pollen grains in water moving around in a completely disordered fashion, tracing out a path like a "drunkard's walk". He was very surprised and thought that here might be the basis of life. But tiny pieces of mica in water sealed up in rocks for millions of years also behaved similarly – these could hardly be alive, so the idea was dropped. It took a long time – about 50 years – for scientists to realize the origin of Brownian motion and to be convinced that they showed the ideas of the kinetic theory and the reality of molecules.

In 1905 Albert Einstein worked out the theory of Brownian motion and Avogadro's number, which is a measure of the actual number of molecules present in a gram-molecule of a substance, was determined from Brownian motion.

Brownian motion occurs in liquids and gases because of the random motion of the molecules. In gases, Brownian motion is best observed by illuminating from the side under a microscope a shallow box containing smoke. A dark background is put behind the box. The illuminated smoke particles seen as bright spots of light execute a zigzag walk against the dark background. The smoke particles have smaller diameters than the wavelength of light but they can easily be seen as they scatter light into a diffraction halo.

There are two sorts of Brownian motions of the smoke particles. The more easily observed movement is that in which the particles are knocked from place to place. There is a second type of motion more difficult to observe, in which large particles, which have some mark on them, are found to be turned through different angles by the impact of the molecules. This is called rotational Brownian motion.