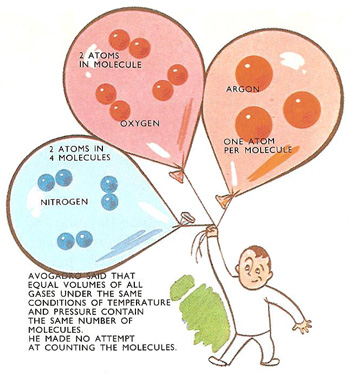 The Avogadro constant, also known as the Avogadro number, one of the best known examples of a large number in science. It is named after the Italian chemist Amedeo Avogadro and is defined as the number of carbon atoms in 12 grams of pure carbon, or, more generally, as the number of atoms of n grams in an element with atomic mass n (see relative atomic mass). It has the value 6.02214199 × 1023. Avogadro's constant is both the ratio of the universal gas constant to the Boltzmann constant and of Faraday's constant to the charge of the electron.

There's no difficulty in counting how many peas there are in a packet, because peas are fairly large and it's easy to pick up a handful and count them one by one. Peas are easy to count; so are particles a thousand times smaller. When they are too small to be seen with the eye alone, they can be counted under a microscope. Some particles, however, are too small and numerous to be dealt with this way.

Avogadro's constant is the number of molecules in one mole (or, in older terminology, one gram-molecule) of any substance. This number has the same value for all elements and compounds. There are 6.025 × 1023 molecules, for example, in every 32 g of oxygen and in 18 g of steam or water or a gram molecular weight of any other substance. (32, 2, and 18 are the molecular weights of oxygen, hydrogen, and water.)


How the number was discovered and measured

Amedeo Avogadro died in 1856, but the first attempts at finding the actual value of Avogadro's number – it only later became known as Avogadro's constant – were not made until nine years after his death. The work on finding this figure was done by the Austrian physicist Johann Josef Loschmidt.

Avogadro had started the train of thought by suggesting that matter might be made up of molecules, tiny invisible clusters of atoms. Containers each of the same size filled with gases, all at the same temperature and pressure, would contain the same number of molecules. When Loschmidt discovered a way of counting the molecules on a gram-molecule, the answer was called, by scientists in other countries, Avogadro's number in honor of the Italian. In Austria and Germany, though, the number was known as Loschmidt's number.

Loschmidt had a difficult problem to solve – that of counting an enormous number of particles that were far too small for him to see. His result was not the result of experiment, but largely that of reasoning. He assumed that the molecules in a gas were in total chaos, bouncing and rebounding all over the place with all sorts of different speeds. To this situation he applied statistical reasoning. This reasoning gave only very rough results, because he overlooked certain factors. Later results of finding Avogadro's constant are much easier to understand and give much better results because they are based on the results of experiments.