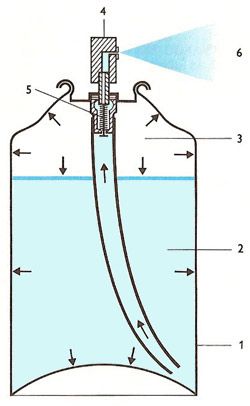 An aerosol is a colloidal dispersion of liquid or solid particles (0.1–100 micrometers diameter) in a gas. Examples include smoke (solid particles in air), mist, fog, and haze in the atmosphere. Large quantities are often regarded as pollutants. Aerosol particles can remain in suspension for hours, or even indefinitely.

As shown by arrows in the diagram to the right, in a commercial aerosol can pressure is exerted on all walls of the strengthened metal container (1) by both the charge, (2) in which is dissolved some of the propellant in its vapor phase (3). On depression of the button (4) the valve (5) opens, and the liquid is forced up the standpipe and through a fine nozzle in the button.

The second type of aerosol that may have a significant effect on climate is desert dust. Pictures from weather satellites often reveal dust veils streaming out over the Atlantic Ocean from the deserts of North Africa. Fallout from these layers has been observed at various locations on the American continent. Similar veils of dust stream off deserts on the Asian continent. The Sep 1994 Lidar In-space Technology Experiment (LITE), aboard the space shuttle Discovery (STS-64), measured large quantities of desert dust in the lower atmosphere over Africa. The particles in these dust plumes are minute grains of dirt blown from the desert surface. They are relatively large for atmospheric aerosols and would normally fall out of the atmosphere after a short flight if they were not blown to relatively high altitudes (15,000 ft and higher) by intense dust storms.

Because the dust is composed of minerals, the particles absorb sunlight as well as scatter it. Through absorption of sunlight, the dust particles warm the layer of the atmosphere where they reside. This warmer air is believed to inhibit the formation of storm clouds. Through the suppression of storm clouds and their consequent rain, the dust veil is believed to further desert expansion.

Recent observations of some clouds indicate that they may be absorbing more sunlight than was thought possible. Because of their ability to absorb sunlight, and their transport over large distances, desert aerosols may be the culprit for this additional absorption of sunlight by some clouds.

The sulfate aerosols also enter clouds where they cause the number of cloud droplets to increase but make the droplet sizes smaller. The net effect is to make the clouds reflect more sunlight than they would without the presence of the sulfate aerosols. Pollution from the stacks of ships at sea has been seen to modify the low-lying clouds above them. These changes in the cloud droplets, due to the sulfate aerosols from the ships, have been seen in pictures from weather satellites as a track through a layer of clouds. In addition to making the clouds more reflective, it is also believed that the additional aerosols cause polluted clouds to last longer and reflect more sunlight than non-polluted clouds.

The additional reflection caused by pollution aerosols is expected to have an effect on the climate comparable in magnitude to that of increasing concentrations of atmospheric gases. The effect of the aerosols, however, will be opposite to the effect of the increasing atmospheric trace gases – cooling instead of warming the atmosphere.

The warming effect of the greenhouse gases is expected to take place everywhere, but the cooling effect of the pollution aerosols will be somewhat regionally dependent, near and downwind of industrial areas. No one knows what the outcome will be of atmospheric warming in some regions and cooling in others. Climate models are still too primitive to provide reliable insight into the possible outcome. Current observations of the buildup are available only for a few locations around the globe and these observations are fragmentary.

Understanding how much sulfur-based pollution is present in the atmosphere is important for understanding the effectiveness of current sulfur dioxide pollution control strategies.