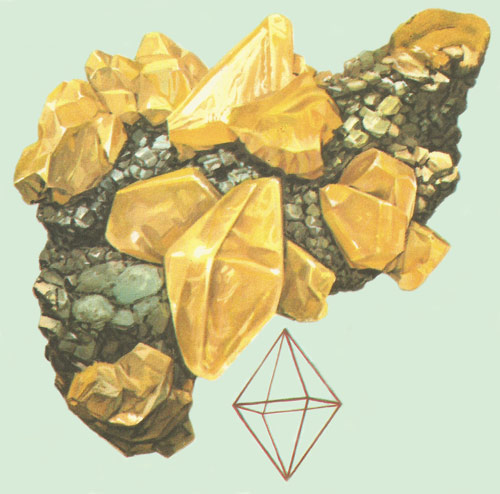 Sulfur is polymorphic, forming crystals of many shapes. This illustration shows well-formed octahedral crystals of sulfur.

Sulfur (S) is a nonmetallic element found in period VIA of the periodic table. It chemically resembles oxygen and can replace it in many compounds, both organic and inorganic.

Sulfur is abundant and widely distributed in nature (see elements, terrestrial abundance and elements, cosmic abundance), occurring in elemental form as yellow crystals, in sulfide minerals, such as galena and pyrite, and sulfate minerals such as gypsum. Sulfur also occurs as hydrogen sulfide (H2S) and as sulfur oxides in volcanic regions, fumaroles, hot springs, and hydrothermal vents. It has been known from early times (as brimstone).

Much of the surface of Jupiter's moon Io appears to be covered in sulfur and sulfur compounds.

The main commercial source is native (free) sulfur, extracted by the Frasch process. Sulfur can also be obtained from hydrogen sulfide by the Claus process.

Until the early years of the twentieth century practically all the sulfur used in the world came from Sicily. In 1865 large deposits were discovered in Louisiana, but the mineral was extremely difficult to extract due to its great depth – 700 to 800 ft – and because it was overlain by thick deposits of sand, saturated with water.

Years were spent trying to solve this problem and finally, in 1890, Herman Frasch, a German engineer who had emigrated to the United States, found a solution to it. He had the ingenious idea of applying to the extraction of sulfur a method similar to that used in oil fields for petroleum.

In the Frasch process a hole is drilled down to the sulfur deposit and in it is inserted a piece of apparatus consisting of three concentric tubes. Superheated water at 165°C is forced down the outer tube and passes out of holes in the lower end, melting the sulfur all round it. The mixture of hot water and molten sulfur is forced to the surface through the second tube by hot compressed air pumped down the center one.

Sulfur exists as a number of different allotropes. Below 95.6°C, the stable crystal form is rhombic, while above this temperature the element changes to a triclinic form. Both these forms contain cyclic S8 molecules.

At temperatures just above its melting point, sulfur is a yellow liquid also containing S8 molecules. At about 160°C, the sulfur atoms link together in chains and the liquid becomes dark brown and more viscous. If the molten sulfur is quickly cooled, for example, by pouring it into cold water, the result is a reddish-brown solid called plastic sulfur. Above 200°C the viscosity decreases.

Sulfur vapor contains a mixture of S2, S4, S6, and S8 molecules. So-called "flowers of sulfur" is a yellow powder obtained by subliming the vapor.

Sulfur is stable in air but will burn if ignited with a blue flame, giving off the acrid gas, sulfur dioxide (SO2). Sulfur dioxide is also produced when coal and oil are burned and is responsible for acid rain.

Sulfur is used in the vulcanization of rubber and in the manufacture of sulfuric acid (H2SO4). It is also used to make matches, dyes, fungicides, insecticides, and fertilizers.

Sulfur dioxide (SO2) is a colorless, pungent, poisonous gas which dissolves in water to give a mixture of sulfuric and sulfurous acids. Sulfur dioxide is used in the contact process to manufacture sulfuric acid and as a refrigerant, bleaching agent, and preservative.

Sulfur is essential to life and is found in the amino acids cysteine and methionine and therefore in many proteins. It is also a constituent of many cell metabolites, such as coenzyme A. The average adult human body contains 140 g (5 oz) of sulfur and takes in about one gram per day. There is a sulfur cycle in nature in which sulfur continually moves between living and non-living things.

There is continual movement of sulfur between living and non-living things – a movement known as the sulfur cycle. Most sulfur in the non-living (abiotic) environment occurs as sulfur dioxide in the atmosphere, derived from the burning of fossil fuels, or as deposits underground and in rocks. Photochemical oxidation of sulfur dioxide in the atmosphere produces sulfates (SO42-), which are carried by rain into the ground; oxidation and weathering of underground deposits also produces sulfates. In the ground, sulfates are absorbed by plants in the living (biotic) environment to become part of sulfur-containing proteins. Animals that eat the plants assimilate the sulfur. Dead plants and animals (and there feces) are broken down by special bacteria that return sulfur to the soil as hydrogen sulfide. Finally, other bacteria convert the hydrogen sulfide back to sulfate or native sulfur.