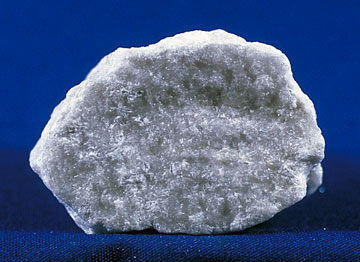 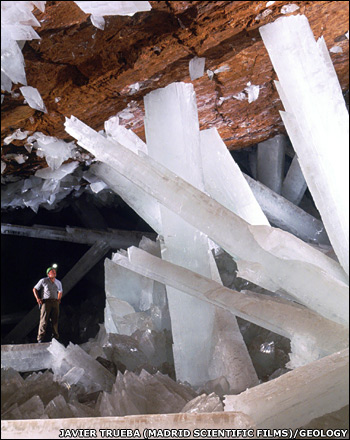 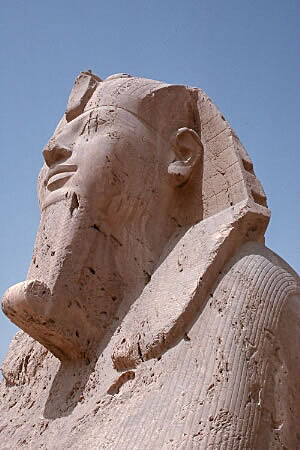 Fig 3. Alabaster sphinx at Memphis, carved from a single block of alabaster. 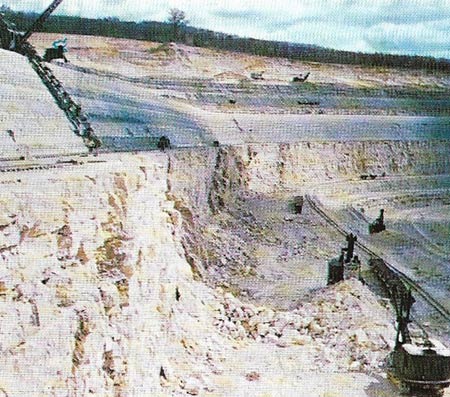 Fig 4. Open-pit mining of gypsum, near Paris, produces the raw material known as plaster of Paris. Where an exploitable mineral occurs near the surface it can be extracted in this way by removing the overburden of soil and rock.

Gypsum is a white mineral, CaSO4.2H2O (hydrous calcium sulfate), used in the manufacture of cements and plasters, especially plaster of Paris (to control the rate of setting of Portland cement), and also in some fertilizers. See calcium.

Gypsum is found in both mineral and rock form (Fig. 1). As a mineral, it can form attractive, and sometimes extremely large, crystals. As a rock, gypsum is a sedimentary rock, typically found in thick beds or layers. It forms in lagoons where ocean waters high in calcium and sulfate content can slowly evaporate and be regularly replenished with new sources of water. The result is the accumulation of large beds of sedimentary gypsum. Because it is deposited in this environment, it is common for gypsum to be associated with rock salt and sulfur deposits. Sedimentary gypsum is the gypsum that is mined commercially.

Gypsum is very soft at 2 on the Moh scale of hardness – so soft that it can be easily scratched with a fingernail. Gypsum crystals are found in a variety of colors, ranging from colorless to tan and even green. Sedimentary gypsum is nearly always white or gray in color.

The largest gypsum crystals ever discovered, of the variety called selenite, with lengths over 11 m, have been found in Mexico's Cueva de los Cristales (Cave of Crystals) (Fig. 2). Research suggests they achieved their immense size because the solution from which they grew remained within in a very narrow, stable temperature range.

The neighboring 120-m-deep Cueva de las Espadas (Cave of Swords), discovered in 1912, was named for its meter-long shafts of gypsum. Although individually there are fewer crystals in the 290-m-deep Cueva de los Cristales, they have grow much larger. Both caves owe their origin to the volcanism which laid down the metal sulphide ores in them that have proved so valuable. Copious amounts of calcium sulphate would also have been created towards the end of this mineralization process more than 20 million years ago. But in the hot fluids that infused the cracks and cavities in the rock, this calcium sulphate would have taken the form of anhydrite. Anhydrite has the same chemical formula as gypsum, except that it excludes water. Only as the magma chamber deep under the Naica mountain cooled did the hot fluids above start to fall to a temperature at which anhydrite could switch to gypsum.

Scientific studies indicate that the deeper of the two caves – Cueva de los Cristales – must have been kept just below the transition temperature for many hundreds of thousands of years. With the temperature maintained just below 58°C for a long period, enormous crystals were able to grow.

Alabaster is a massive, fine-grained form of gypsum (calcium sulfate), usually translucent and white (Fig. 3). It has been used ornamentally for many centuries, being easily carved. In the Middle Ages alabaster was cut into thin laminae for use in church windows, notably in Italy, e.g., San Vitale, Ravenna. It can also be dyed or made opaque by heating. Ancient oriental alabaster was a yellowish marble.

Also know as gypsum cement, this is a powdered form of calcium sulfate hemihydrate, 2CaSo4.H2O, obtained by heating gypsum to around 150°C (300°F) (Fig. 4). After the addition of water, it sets and hardens and is used as plaster for a wide range of purposes, including the setting of broken limbs and the making of molds.