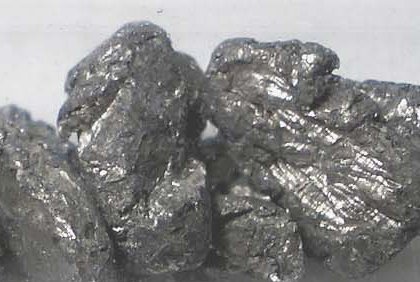 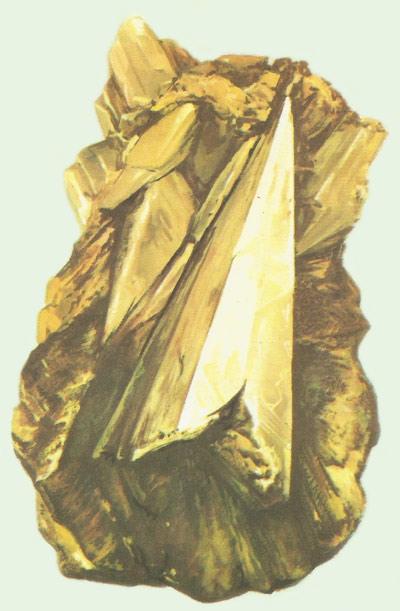 Calcium (Ca) is a soft, gray, metallic element that tarnishes rapidly on exposure to air. Calcium is one of the alkaline earth metals. It occurs commonly on Earth (see elements, terrestrial abundance), in various forms of its carbonate (CaCO3), e.g., chalk, limestone, marble, and calcite, and its sulfate (CaSO4), e.g., gypsum. Its compounds are used to make plaster, quicklime, Portland cement, and metallurgic and electronic materials.

Calcium was discovered by Humphry Davy in London in 1808. Its name is derived from the Latin calx, meaning "lime." It is derived by electrolysis of fused calcium chloride and is used as a reducing agent to prepare other metals and in alloys.

Calcium is generally more reactive than magnesium but not as reactive as sodium or potassium. It reacts quite vigorously with water to form calcium hydroxide and hydrogen. If left exposed to air, it slowly oxidizes to calcium oxide. Calcium react with the halogens to form the corresponding halides. When heated, it reacts with nitrogen to form calcium nitride with sulfur to form calcium sulfide.

Calcium carbonate (CaCO3) is a colorless crystalline solid, occurring naturally as calcite, chalk, limestone, marble, and aragonite. It also forms the shells of molluscs. Crystals of calcium carbonate are in the hexagonal system and vary in form from tabular (rare) to prismatic or needle-like. Calcium carbonate loses carbon dioxide on heating above 900&#176C, and is an insoluble base. It is used in the manufacture of cement, iron, steel, and lime, to neutralize soil acidity, and as a constituent of antacids.

Calcium carbide (CaC2) is made commercially by heating coke and calcium oxide in an electric furnace. It reacts with water to yield acetylene (ethyne, C2H2), a gas that burns with a luminous flame; for this reason it was once much used in carriage and locomotive lamps. Calcium carbide is also used to manufacture acetic acid (ethanoic acid, CH3COOH) and acetaldehyde (ethanal, CH3CHO).

Calcium chloride (CaCl2) is a colorless crystalline solid, a by-product of the Solvay process. Being very deliquescent, it is used as an industrial drying agent. Melting point 782°C.

Calcium hydrogencarbonate (Ca(HCO3)2), or slaked lime, is a colorless crystalline solid, slightly soluble in water, prepared by hydrating calcium oxide and used in industry and agriculture as an alkali, in mortar, and in glass manufacture. It is responsible for temporary hardness of water (see hard water). The hardness is removed when the water is heated and insoluble calcium carbonate is precipitated from the water, forming a "fur" inside pipes and kettles. This also happens when water drips inside caves and forms stalactites and stalagmites.

Calcium hydroxide (Ca(OH)2), or slaked lime, is a colorless crystalline solid, slightly soluble in water, prepared by hydrating calcium oxide and used in industry and agriculture as an alkali, in mortar, plaster, and cements, in water softening, and in glass manufacture.

Calcium oxide (CaO), or quicklime, is white crystalline powder, made by calcination of calcium carbonate minerals, which reacts violently with water to give calcium hydroxide and is used to make porcelain, glass, bleaching powder, caustic soda, mortar, and cement, and in the recovery of ammonia from the ammonia-soda process. Calcium oxide was used in the nineteenth century for producing limelight illumination, an incandescence that occurs when coal-gas is burned in air against a block of quicklime. Melting point 2,580°C, boiling point 2,850°C.

Calcium sulfate (CaSO4) is a colorless crystalline solid, occurring naturally as gypsum and anhydrite. When the dihydrate (CaSO4.2H2O) is heated to 128°C, it loses water, forming the hemihydrate, plaster of Paris (CaSO4)2.H2O. This re-forms the dihydrate as a hard mass when mixed with water, and is used for casts.

Calcium is essential to human and all terrestrial vertebrate life, being the basic constituent of bones and teeth (calcium phosphate) and playing an important role in many metabolic processes, including nerve function, muscle contraction, and blood clotting (see also elements, biological abundance). It is the most abundant mineral in the body; an average-sized person carries about 0.9 to 1.1 kilograms of calcium, mostly in the bones. It is present in the blood at a concentration of about 10 mg/100 ml, being maintained at this level by hormones (see calcitonin, parathyroid hormone).

The main dietary sources of calcium are dairy products, eggs, and green, leafy vegetables. Calcium may also be added to flour. The normal dietary requirement is about 1 gram per day. The uptake of calcium is facilitated by vitamin D; a deficiency of this vitamin may therefore result in such conditions as rickets, osteoporosis, and osteomalacia. A deficiency of calcium in the blood may lead to tetany. Excess calcium may be deposited in the body as calculi.

Calcium, in the form of calcium carbonate, also occurs in the shells of invertebrates.