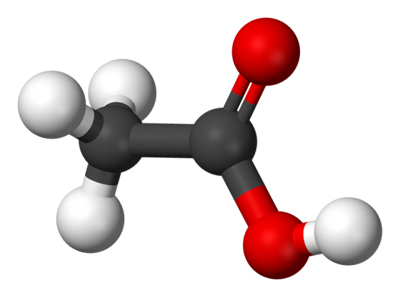 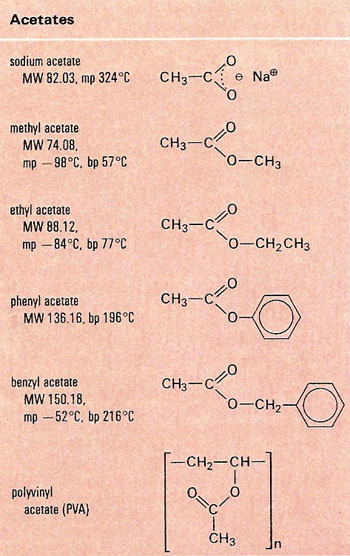 Acetic acid, also known as ethanoic acid, CH3COOH, is the simplest carboxylic acid (Fig 1). It is a pungent, colorless, corrosive liquid. It is the acid found in vinegar and is often used as a reagent in making acetates and in biosynthesis. It is also used in the preparation of pharmaceuticals, and in industry. Pure ("glacial") acetic acid solidifies to ice-like crystals and is corrosive. Relative density is 1.049, melting point 16.6°C, boiling point 117.9°C.

Acetic acid is produced industrially by the liquid-phase oxidation of acetaldehyde (ethanal) at 60°C by oxygen or air under pressure in the presence of manganese (II) ethanoate (the latter preventing the formation of perethanoic acid). Another important route is the liquid-phase oxidation of butane by air at 50 atm. and 150–250°C in the presence of a metal ethanoate. On a small scale it is produced by bacterial action on alcohol, yielding vinegar.

Acetic acid is a very stable substance; it resists the action of reducing and oxidizing agents and does not readily decompose when heated. For these reasons it is a useful solvent for organic substances. Acetic acid has the usual properties of acids, such as reacting with bases to form salts. Although there are four hydrogen atoms in a molecule of acetic acid, only the one in the carboxyl (–COOH) group can be replaced by a metal. The salts of acetic acid are called acetates (or ethanoates), thus sodium acetate is obtained when acetic acid is neutralized by sodium hydroxide. Acetic acid also reacts with alcohols to form a class of compounds called esters. In certain ways the esters are comparable with salts in inorganic chemistry.

An acetate, also known as an ethanoate, is a compound in which the acid hydrogen atom in acetic acid is replaced either by a metal (forming a soluble acetate salt containing the ion (CH3COO-) or by an organic radical, giving a covalent ester such as ethyl acetate (CH3COOC2H5) (Fig 2). Acetate esters are of great commercial importance, being used as solvents and for the manufacture of plastics and fibers. The various cellulose acetates are used in sheet form as a base for photographic films.

Acetogens are autotrophic bacteria that generate acetate as a product of anaerobic respiration. Typically they use hydrogen gas for energy and derive carbon for building organic molecules from inorganic carbon dioxide. Acetogens include certain types of endoliths found in igneous formations. In these basaltic rocks, the hydrogen is produced by the reaction of oxygen-poor water with iron-bearing minerals.