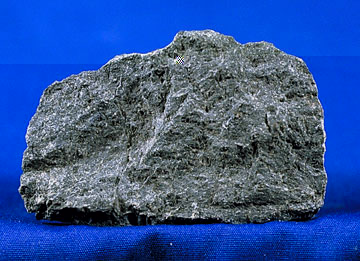 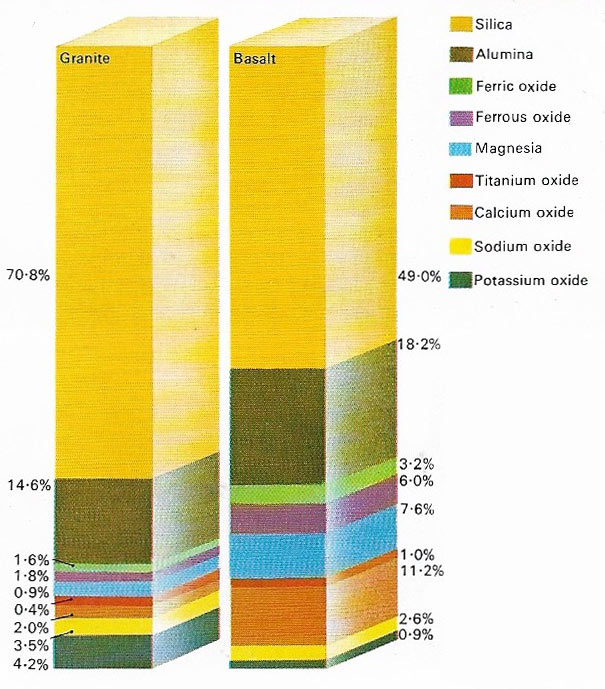 Fig 2. Basalt and granite are the two commonest rocks found on the Earth's surface. Both are composed mostly of the elements silicon and oxygen. These are combined with minor amounts of other elements into natural chemical compounds called minerals. Basalts occur either as lava flows or dikes, while granites occur as batholiths. 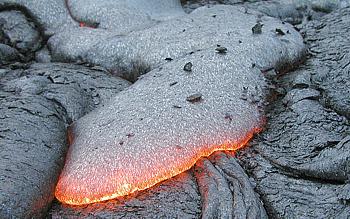 Basalt is a hard, fine-grained, dark-colored rock (Fig 1)of volcanic origin composed primarily of plagioclase feldspar, and pyroxene, together with other minerals (Fig 2), usually including olivine and ilmenite (an oxide of iron and titanium). It contains less than about 52% by weight of silica (SiO2), which results in a low viscosity (resistance to flow.)

Basalt is the most common extrusive igneous rock on the terrestrial planets and is the most common rock type in the Earth's crust (the outer 10 to 50 km). It covers about 70% of Earth's surface, including most of the ocean floor.

Huge outpourings of lava called flood basalts are found on many continents. For example, the Columbia River basalts, which erupted 15 to 17 million years ago, cover most of southeastern Washington and regions of adjacent Oregon and Idaho. It can form vast plateaus, such as the 200,000-square-mile Deccan of India. Basalt can also assume a striking columnar structure, as exhibited in the Palisades along the Hudon River, the Devil's Postpile in California, and the Giant's Causeway in Ireland.

Basaltic magma is commonly produced by direct melting of the Earth's mantle, the region of the Earth below the outer crust. On continents, the mantle begins at depths of 30 to 50 km.

Shield volcanoes, such as those that make up the islands of Hawaii, are composed almost entirely of basalt as, indeed, are most oceanic islands.

Basalt was widely used by the ancient Egyptians for their sculpture, and in the construction of tombs and obelisks. The name is also applied to a pottery of basaltic appearance made by Josiah Wedgewood.