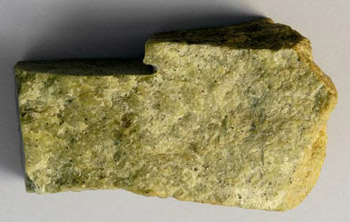 Olivine is any of a group of silicate minerals which are orthosilicates of magnesium and iron (Mg, Fe)2SiO4. Olivine forms olive-green crystals in the orthorhombic system, and occurs commonly in igneous rock (Fig 1), chiefly basalt, gabbro, and peridotite (Fig 4). The transparent variety peridot is used as a gemstone (Fig 2). Olivine is also found in some meteorites, such as carbonaceous chondrites.

Dunite is a coarse-grained igneous rock of color ranging from light yellowish green to an emerald green, composed almost entirely of olivine (Fig 3). It occurs at Dun Mountain, New Zealand, from which it takes its name.

Peridot is a gem variety of transparent green olivine. Large crystals are found on St John's Island in the Red Sea and in Burma.

Peridotite is a dark, course-grained igneous rock composed mainly of olivine with some pyroxene and hornblende but little feldspar; it alters to serpentine. Some varieties of peridotite bear chromium ore, platinum, or diamonds. Rocks that consist mainly of olivine are called dunites.