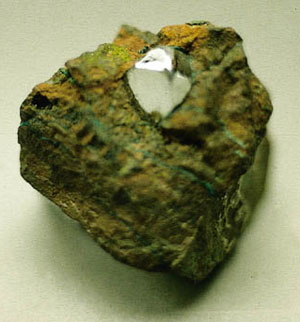 Specimen of sperrylite: a rare mineral that is the only native compound of platinum. Photo from MII, courtesy of the Smithsonian Institution. 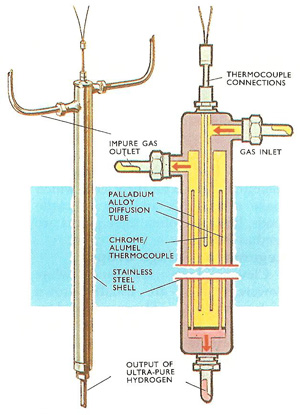 External view and cutaway of a palladium alloy diffusion cell used for purifying hydrogen. The cell operates at about 400°C and 30 atmospheres pressure.

Platinum (Pt) is a lustrous, silvery-white metallic element and a transition element. It was known to native South Americans before the arrival of Columbus, and was first taken to Europe in 1750; it is chiefly found in some ores of nickel. Malleable and ductile, platinum is used in jewelry, dentistry, electrical-resistance wire, magnets, thermocouples, surgical instruments, electrodes, and as a catalyst in catalytic converters in cars, for the contact process, and (alloyed with rhodium) for the Ostwald process.

Platinum is chemically unreactive and resists tarnishing and corrosion. These traits are shared with five other elements that, with platinum, and often found together as alloys and form the platinum group: iridium, osmium, palladium, rhodium, and ruthenium. Its most common isotope is 195Pt (33.8%).