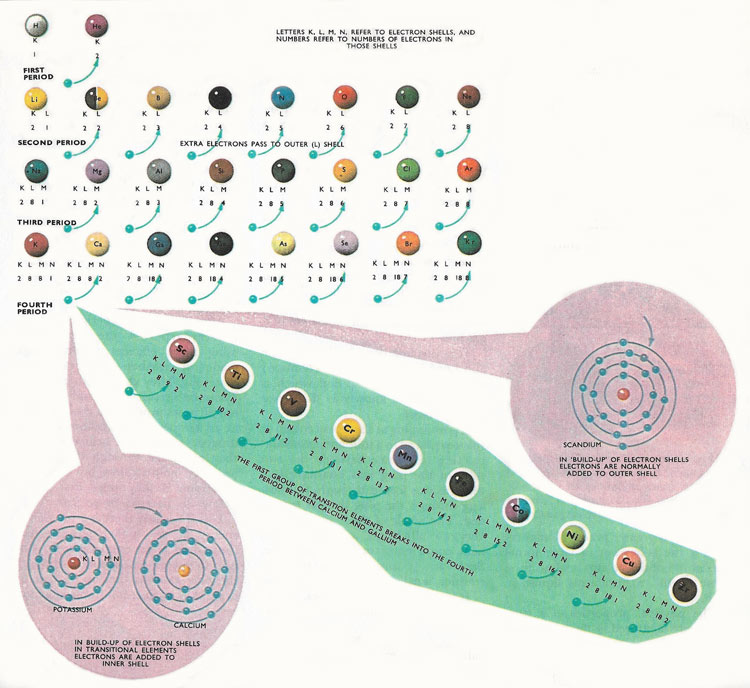 The first part of the periodic table, showing the intervention of the first family of transition elemenets into the fourth period. The electrons are gained by an inner shell, and not the outer shell, as expected. 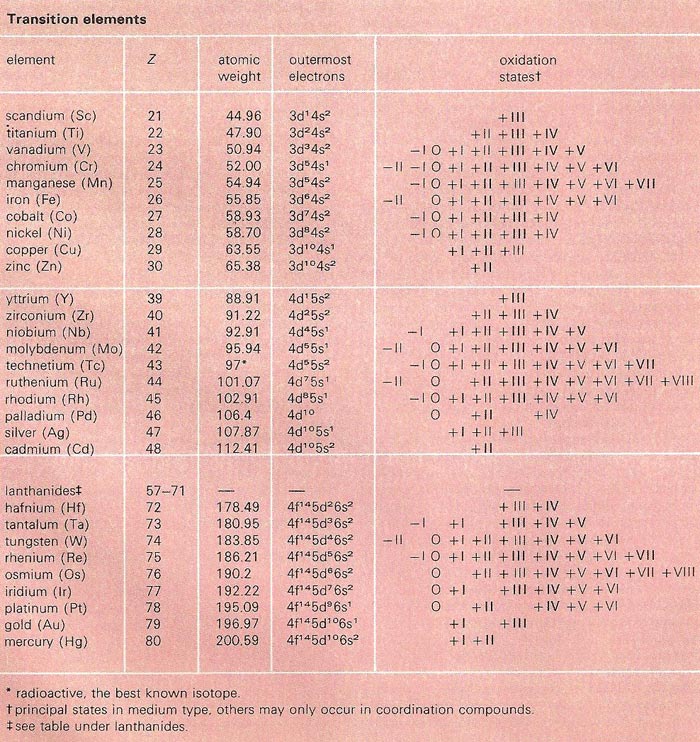 A transition element is a metallic element that has an incomplete inner shell. Transition elements occupy the short groups in the periodic table – i.e., groups IB through VIIB and group VIII – in which the d-orbitals are being filled. In general the transition elements are dense, hard, and of high melting point. Their electronic structures, with many loosely-bound unpaired d electrons, account for their properties: they exhibit many different valence states, form stable ligand complexes, are mostly colored and paramagnetic, and are generally good catalysts. They form many stable organometallic compounds and carbonyls (compounds in which carbon monoxide, CO, acts as a ligand) with specially stable "push-pull" bonding. The second and third row transition elements are less reactive than the first row, and stable in higher valence states. Many transition elements are technologically important.

There are 92 naturally occurring elements and almost two dozen heavier, artificial elements. The properties of the elements differ greatly, ranging from highly reactive gases such as fluorine and chlorine and highly reactive metallic solids such as sodium and potassium to the inert gases and the heavy unreactive metals such as silver and gold. Since the earliest days of chemical science, attempts had been made to put some sense and order into the classification of the elements – to explain the wide differences in the properties of some elements and the similarities of others. This was eventually done, with outstanding success, by Dmitri Mendeleyev when he devised his periodic classification. He found that if the elements were arranged in order of increasing atomic weight, they fell into natural periods. The two lightest elements, hydrogen and helium, form a short period of their own. These are followed by the period of eight elements starting with lithium and ending with neon. The next period of eight elements starts with sodium and ends with argon.

When the elements were arranged in this way, they formed natural families. In each period there was a gradual change in properties from one element to its neighbor. In the first period, the first member, lithium, loses an electron very easily – in other words, it is strongly electropositive. Proceeding through the period, the elements become less electropositive until the seventh member is the strongly electronegative fluorine. The eighth member of the period, neon, is almost totally inert. In the second period, the change in properties is repeated. The first member, sodium, is very similar to lithium; the second member, magnesium, is very similar to the second member of the first period, beryllium. This repetition of properties carries on through the second period, and the periods that follow it.

All the elements from scandium to zinc are called transition elements. In the fifth and sixth periods of the periodic table the build-up of the outer shell is similarly interrupted. Further families of transition elements are formed by the build-up of electrons in inner shells in these periods. The outer shells contain only two electrons and the elements have many properties in common.


Properties of the transition elements

Many of the most common and important metals are transition elements, including iron, copper, zinc, silver and gold. All of the transition elements are dense shiny metals – good conductors of heat and electricity. Included in the transition metals are the strongly magnetic (ferromagnetic) metals iron, cobalt and nickel. Most of the other transition metals are paramagnetic – weak versions of the three magnetic materials. These magnetic properties are due, once again, to the arrangements of electrons in the shells. In ferromagnetic materials, for example, there are unpaired electrons in the shells – for one electron spinning in one direction there is not another spinning in the opposite direction to neutralise the magnetic effects produced by the first.

The transitional elements all form positive ions, usually highly colored both in the solid and in solution. Some of them also form complex ions. The metallic ion takes up molecules of water or ammonia, or even other ions and chemical groups (e.g. the cyanide ion CN-) to form these coordination compounds. A well known example of this is the cuprammonium ion (Cu4NH3)22+ formed when ammonia solution is added to a solution of a copper salt. The deep-blue solution that results is used to confirm the presence of copper ions in qualitative analysis.