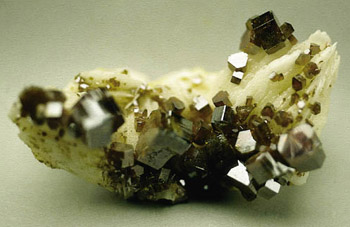 Vanadinite. Photo from MII, courtesy of the Smithsonian Institution.

Vanadium is a soft, ductile, silver-white, metallic element in group VB of the periodic table. It is a transition element. Vanadium is widespread, the most important ores being carnotite and roscoelite; it is isolated by the reduction of vanadium (V) oxide with calcium.

Vanadium is mostly used in alloys to make hard and wear-resistant steels. It is alloyed with iron to make carbon steel, high-strength low-alloy steel, full alloy steel, and tool steel. These ferrovanadium alloys are used to make armor plating for military vehicles and other protective vehicles; car engine parts that must be very strong, such as piston rods and crank shafts; and the frames of high-rise buildings and oil drilling platforms. A mixture of vanadium and gallium is useful in making superconductive magnets.

Vanadium is fairly unreactive. It forms compounds in oxidation states +2, +3, +4, and +5. Its most common isotope is 51V (99.76%). Vanadium (V) oxide is used in ceramics and as a catalyst in the contact process.

Vanadium was discovered independently by two scientists. In 1803, Andres Manuel del Rio, a Spanish mineralogist working in Mexico City, found a material he first called brown lead and later renamed erythronium, meaning red, because it turned red when heated. In 1831, the Swedish chemist Nils Gabriel Sefstrom isolated a new material that he named vanadium in honor of the goddess of beauty and fertility, Vanadis. Ultimately, the name vanadium was chosen.

Henry Roscoe isolated metallic vanadium in 1867. He took vanadium chloride (VCl3) and reduced it with hydrogen to form vanadium metal and hydrochloric acid.

A tiny amount of vanadium occurs in the human body, but appears to serve no biological purpose there. Vanadium is, however, an essential element to ascidians, also known as sea squirts. These organisms concentrate vanadium in their bodies to a level one million times higher than the concentration of vanadium in seawater.