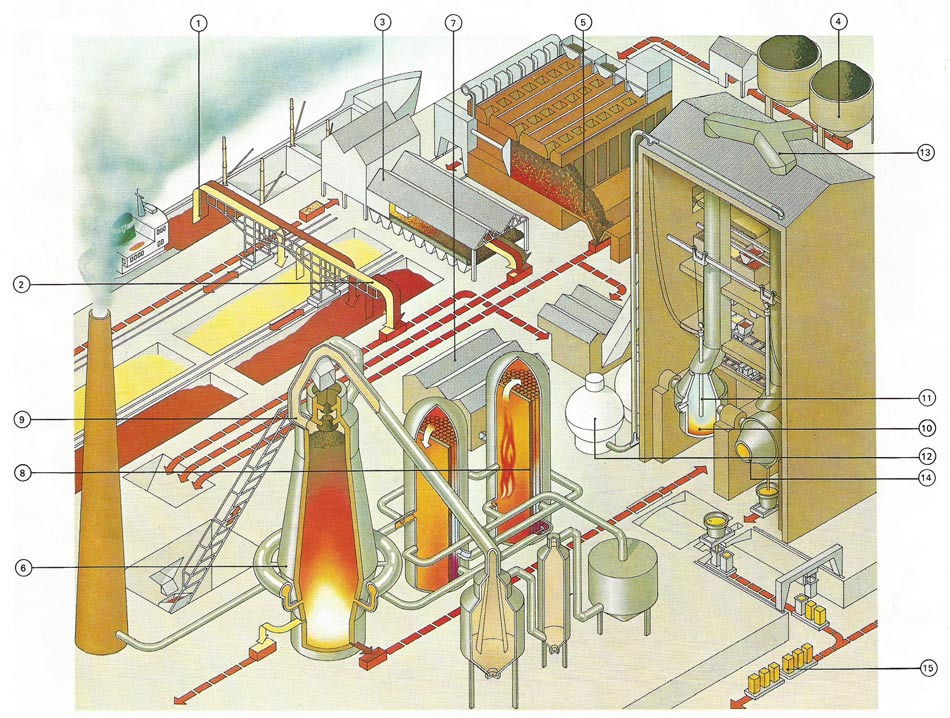 A modern steelmaking plant uses coal as the initial fuel. Iron and limestone (1) are brought in by train or ship and are conveyed (2) from storage to a blast furnace. But some ore and limestone are first heated with coke (3). Coal from a coal store (4) is converted into coke in a coking plant (5). All these materials are then fed to the blast furnace (6) in which iron reacts with carbon from the coke and the other materials to form a layer of molten slag. A pumphouse (7) supplies the furnace air, which is preheated in heat exchangers (8) by hot gases (9) from the blast furnace. Too much carbon is absorbed by the iron in the blast furnace and this excess is removed in a second basic oxygen furnace (10) containing an oxygen lance (11) fed from large spherical tanks (12). Coke and limestone are also used in the refining process. Gas from the oxygen furnace is taken off (13) for cleaning before being discharged into the atmosphere. The refined steel, containing between 0.15 and 0.25% carbon, is poured from the oxygen furnace (14) and cast into ingots ready for working (15). 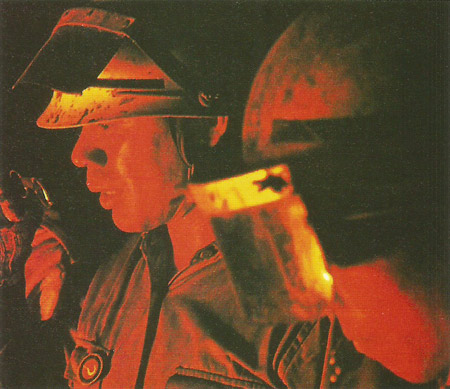 Fig 1. Steelmaking is often hot, tough work, as the faces of these Japanese steelworks show. In the nineteenth century men whose job it was to tap or release the molten steel from the furnaces had no protective clothing, and the intense heat could kill them. Today automatic controls protect workers. 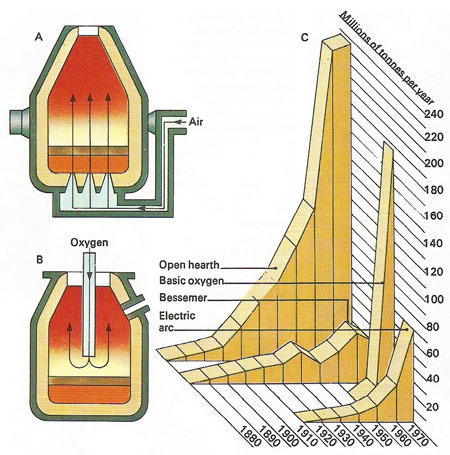 Fig 2. In the Bessemer process (A), cast iron is converted into steel by blowing air through the molten iron until all carbon an silicon is burned out in a huge flame. A little carbon is then selectively re-added in the form of Spigelia iron. A modern development in steelmaking is the basic oxygen process (B) in which oxygen gas is blown on to molten iron. The production by this process soared from 1970 onwards. 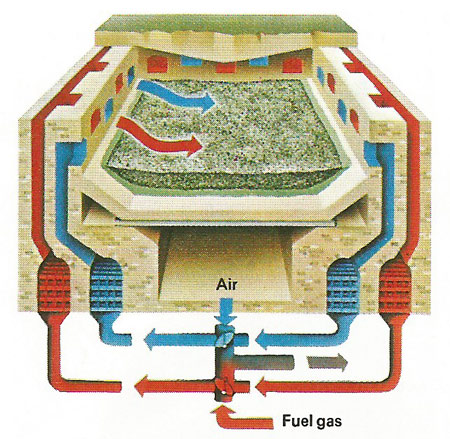 Figure 3. The Siemens-Martin open-hearth process, in which streams of air and fuel-gas are fed alternately on to the furnace contents, was used to make most of the steel during the 20th century, but has been superceded by electric and basic oxygen methods. It uses the gases from the molten charge to preheat the air blast and so economizes on fuel. An alkaline lining is used if the ore contains phosphorus. 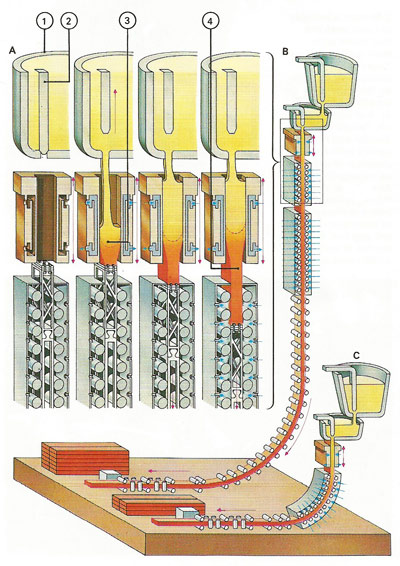 Fig 4. Continuous casting is a modern method of making steel in the form of bars and rods cheaply and quickly. A casting run (A) starts with molten steel being poured into a copper mold (1) which is closed by a plug (2) at its lower end. The steel is cooled by water in the mold and when it is nearly solid the plug is withdrawn; the molded steel moves down (3) and is then further cooled by means of water sprays before being cut into the required lengths. While the plug is withdrawn molten steel is poured continuously (4).The original casting process (B) had a straight, vertical cooling section, but a newer type (C) has a curved section that requires less space. 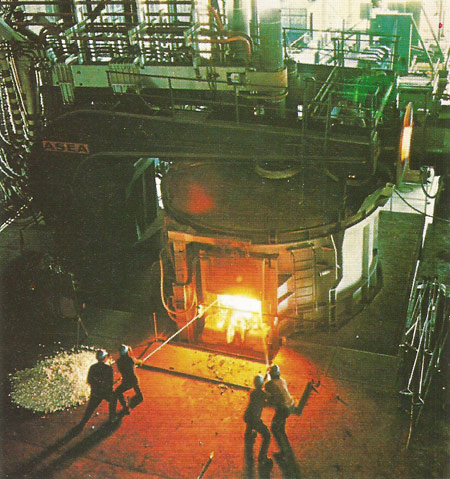 Fig 5. Electric arc furnaces attain very high temperatures, with all oxygen excluded. For this reason, they are used to make steels containing oxidizable metals such as chromium and vanadium.

Steel is an alloy of iron and carbon and, in some cases, other elements as well, such as manganese, chromium, titanium, and silicon. The addition of carbon in amounts that vary from 0.002% to 2.1% results in alloys that are harder and stronger (have a higher tensile strength) than iron. Steels that contain only carbon in addition to iron are called carbon steels; those that contain other elements as well as known as alloy steels – low-alloy steels if they have less than 5% of the alloying metal, high-alloy steels if more than 5%. Alloy steels, such as stainless steel, (a corrosion-resistant steel containing more than 10% chromium, little carbon, and often nickel) are used for certain applications because of their special properties. Steel production is now one of the chief world industries, being basic to all industrial economies. Steel's many uses include car manufacture, shipbuilding, skyscraper frames, reinforced concrete, and machinery.

Ten thousand years ago the technology of our ancestors was based upon the use of stone, three thousand years ago upon bronze, and two thousand years ago upon iron. Thus we refer to the Stone Age, Bronze Age,and the Iron Age. There is no corresponding period that archaeologists can specify as an age based on steel. Steel has been made in large quantities for only about 140 years, during which time it has become vital to our civilization. But the origins of steel lie in the remote past.

Plain or mild steel, as used in a host of applications, is an alloy of iron with a little carbon. More particularly, mild steel contains between 0.15 and 0.25% carbon, partly in the form of iron carbide or cementite. Steel is much harder than pure iron and less brittle than cast iron (which contains more carbon than steel does); its strength, toughness, and springiness account for its great usefulness.

The first makers of iron tools and weapons on a large scale were the Hittites, and it was men of a subject tribe of the Hittites, the Chalybes, who first made steel in about 1400 BC. Chalybean steelsmiths in Asia Minor employed a cementation process; that is, they hammered hot but still unmolten iron together with charcoal until the iron became steel. During the hammering, carbon from the charcoal diffused into the iron, forming cementite – hence the name.

Variations on the cementation process continued in use for more than a thousand years, spreading from the Middle East into Europe and India. But it was in southern India that iron was melted for the first time and steel cast into molds. The Romans imported this steel in the shape of small, rounded cakes. They thought that it originated in China and called it "seric" (meaning Chinese) iron.

In Europe steel was sometimes made directly from an ore with the correct carbon content, but this was rare. More often steel resulted from the cementation process and, from the 8th century AD onwards, cementation steel began to began to be exported from the iron-rich parts of central Europe known as Styria and Carinthia. This steel had been further hardened by quenching it from red heat in water. It had taken a long time for this tempering to be learned, probably because the earlier known metals copper and bronze, quenched in this way, become softer. By the fifteenth century early printers were using steel punches in the manufacture of their type molds and, midway through the seventeenth century, tempered steel coach springs first added a little comfort to travel on Europe's rutted and pot-hole-strewn roads.

A great problem with early steel was the presence in it of slag waste from the ore, which made it difficult to manufacture large steel objects without structural weaknesses. This problem was solved by the mid-eighteenth century as the result of the work of Turbern Bermann (1735–84), a Swedish metallurgist, and Benjamin Huntsman (1704–76). "Swedish steel", made from high-grade iron ore found in Sweden had a controlled carbon content and was free from slag, where Hunstman developed an improved form of the so-called crucible process that allowed him to make high-quality hardened steels for watch and clock springs. In the crucible process, steel, charcoal, and wrought iron were melted in a fire-clay crucible. Such high-grade steels, however, were expensive to produce. In 1850, the entire output of steel in Britain was only 60,000 tons. Yet, 20 years later, steel was being produced in great quantities, at an average rate of one ton per minute, in batches made as cheaply as cat iron, by a new process that used Bessemer furnaces or "converters".

The secret of the Bessemer process (Fig 2), developed by Henry Bessemer (1813–1898) in 1856 from the invention of a bankrupt Kentucky steelmaker, William Kelly (1811–1888), was that excess carbon could be oxidized (combined with oxygen) by forcing bubbles of air through a mass of molten iron. Moreover, the carbon burned to carbon dioxide in the blast of air, so acting as a fuel. Once started, the process, the process continued without the addition of more fuel coal and was thus extremely economical.

Within five years the Bessemer process had a rival in the Siemens-Martin open-hearth process (Fig 3), in which iron, iron ore, and scrap steel are melted in such proportions as to drive of most of the carbon and oxygen as carbon monoxide. This inflammable gas is then burned "regeneratively" to pre-heat the blast. This efficient operation was, by 1900, producing more steel than even the Bessemer process.

The 20th-century saw further revolutions in steelmaking, notably the continuous casting (Fig 4) of steel and special steels such as those for making machine tools and turbine blades. The newer steels include stainless steels, which contain chromium, nickel, and sometimes molybdenum, and are made in an electric furnace. Most modern processes use a basic slag and a basic refractory furnace lining: acidic processes are incapable of removing phosphorus. When the impurities have been removed, desired elements are added in calculated proportions. The molten steel is cast as ingots which are shaped while still red-hot in rolling mills, or it may be cast as a continuous bar ("strand casting").

The properties of medium-carbon (0.25% to 0.45% carbon) and high-carbon (up to 1.7% carbon) steel may be greatly improved by heat treatment: annealing, casehardening, and tempering.

Annealing is the slow heating and cooling of a metal, alloy, or glass to relieve internal stresses and make up crystal dislocations or vacancies which have arisen in casting, cold working, or machining. The annealed material is tougher and easier to process further. Machine tools, wire, and sheet metal are annealed during manufacture.

Casehardening is any process applied to the surface of mild steel to increase its wear resistance and surface hardness. Most commonly, the steel is packed around with powdered charcoal and heated for a certain period, so that the surface regions absorb carbon. The steel is then quenched (rapidly cooled) with water. Other techniques include induction hardening and flame hardening; and nitriding, used for certain suitable steels, where the steel is heated in ammonia gas or molten cyanide salts so that nitrogen is diffused into its surface regions.

Steel metallurgy is complex: unhardened steel may contain combinations of three phases – austenite, ferrite, and cementite – differing in structure and carbon content; hardened steel contains martensite, which may be thought of as ferrite supersaturated with carbon.

A ferroalloy is a combination of silicon, manganese, chromium, molybdenum, vanadium, titanium and several other elements, added to molten steel to confer such properties as greater strength and corrosion resistance. Individually they are named after their major constituents; for example, ferrochromium contains about 70% chromium, about 6% carbon, and about 2% silicon as well as iron.