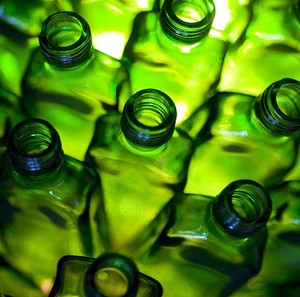 Glass is a brittle, transparent material formed by the rapid cooling of certain molten liquids so that they fail to crystallize but retain an amorphous structure. Glasses are in fact supercooled liquids which, however, have such high viscosity that they behave like solids for all practical purposes. Some glasses may spontaneously crystallize or devitrify. Few materials form glasses, and almost all that are found naturally or used commercially are based on silica and the silicates.

Natural glass is formed by rapid cooling of magma, producing chiefly obsidian, or rarely by complete thermal metamorphism (see also tektite). The earliest known manufactured glass was made in Mesopotamia in the 3rd millennium BC. Glass was shaped by molding or core-dipping, until the invention of glass-blowing by Syrian craftsmen in the 1st century BC. Essentially still used, the process involved gathering molten glass on the end of a pipe, blowing to form a bubble, and shaping the vessel by further blowing, swinging, or rolling it on a surface. They also blew glass inside a shaped mold; this is now the chief process used in mechanized automatic glassblowing.

Modern glass products are very diverse, including windows, bottles and other vessels, optical devices, building materials, fiberglass products, etc. Most are made of soda-lime glass. Although silica itself can form a glass, it is too viscous and its melting point is too high for most purposes. Adding soda lowers the melting point, but the resultant sodium silicate is water-soluble, so lime is added as a stabilizer, together with other metal oxides as needed for decolorizing, etc. The usual proportions are 70% SiO2, 15% Na2O, 10% CaO.

Crown glass, used in optical systems for its low dispersion, is a type of soda-lime glass, though with barium oxide (BaO) often replacing the lime. It has a lower refractive index and lower dispersion than flint glass, but is more durable.

Flint glass, or crystal, is a brilliant, clear, lead-containing glass, used in high-quality glassware and to make lenses and prisms. Because it absorbs most ultraviolet light but comparatively little visible light, it is also used for telescope lenses. Flint glass typically has a much higher refractive index than does crown glass, and exhibits much higher dispersion, however it is less resistant to damage. Flint glass is used in conjunction with crown glass to make achromatic lenses. It was originally made from crushed flints to give pure, colorless silica; later, sand was used, with increasing amounts of lead (II) oxide.


Other types of glass

Borosilicate glass is used in applications where high thermal stresses must be withstood. Pyrex is a borosilicate glass used in chemical and industrial apparatus and in ovenware. It is inert, a good insulator, and heat-resistant (having a low coefficient of expansion and a high softening temperature).

Glass in the form of filaments is widely used for heat insulation (as glass wool), for fabrics, and with a plastic resin to make a construction and repair material called GRP (glass-reinforced plastic). GRP, a rigid composite material, is commonly referred to as fiberglass, and is a popular medium for car bodies, boats, aircraft parts, and containers. It resists heat, corrosion, rot, and most chemicals and can be, weight for weight, stronger than steel.

Fiberglass retains the tensile strength of glass yet is flexible. The most used form is fused quartz, which when molten can be easily drawn and which is resistant to chemical attack. Most often, the molten glass is forced through tiny orifices in a platinum plate, on the far side of which the fine fibers are united (though not twisted) and wound onto a suitable spindle. Fiberglass mats (glass wool) are formed from shorter fibers at random directions bonded together with a thermosetting resin; they may be pressed into predetermined shapes.

Safety glass is a form of glass that is less hazardous than ordinary glass when broken. One form of safety glass consists of two sheets of 3 mm (1/8 in) plate glass bonded to a thinner central sheet of transparent plastic. If an impact breaks the glass, the plastic holds the fragments in place. Bullet-proof glass consists of several layers of glass and plastic. Wired glass has an embedded wire mesh to hold the fragments in place. Toughened glass is glass that has been treated to make it stronger than ordinary glass. When shattered, the glass forms small blunt fragments, which are much less dangerous than the sharp splinters from ordinary glass.

Stained glass is colored glass used for decorative effect in windows, most commonly in churches. The oldest surviving examples of complete stained glass windows are in Augsburg Cathedral, Germany, and date back from about 1100.

In its purest form, stained glass is made by adding metal oxide coloring agents during the manufacture of glass. Shapes cut from the resulting sheets are then arranged to form patterns or images. These shapes are joined and supported by flexible strips of lead that form dark, emphatic contours. Details are painted onto the glass surfaces in liquid enamel and fused on by heat. Other techniques include the application of colored surface coatings onto clear glass. Intricate designs may be scraped into the surface. In modern windows, the pieces of glass are sometimes joined using an adhesive instead of lead strips.

The manufacture of the various kinds of glass begins by mixing the raw materials – sand, limestone, sodium nitrate or carbonate, etc. – and melting them in large crucibles in a furnace. The molten glass, having been refined (free from bubbles) by standing, is formed to the shape required and then annealed. Some safety glass is not annealed, but rapidly cooled to induce superficial compressive stresses which yield greater strength. Plate glass is made by passing a continuous sheet of soft glass between rollers, grinding and polishing it on both sides, and cutting it up so as to eliminate flaws. A newer method (the float glass process) involves pouring the molten glass into molten metal, such as tin, and to allow it to cool slowly; the surface touching the metal is perfectly flat and needs no polishing. Special glass products include foam glass, made by sintering a mixture of glass and an agent that gives off a gas on heating, used for insulation; photosensitive glass, which darkens reversibly in bright light; and fiberglass.


The art of glass-making

As far back as 1291 the glass-makers of Venice had been limited to practicing their craft on the nearby island of Murano, because their furnaces might cause fires to break out in the town.

From the 15th century onwards, Venetian products were exported all over European vases, beakers, and goblets of brilliantly colored or pure and transparent crystal, and costly mirrors for the great ladies of the European court. This flourishing industry brought such great wealth to the republic that the Venetian leaders took the strongest possible measures to make sure that their craftsmen could not go abroad to teach the craft to other nations. The art of glass-making had been known since ancient times. Amulets and ornaments of glass made more than four thousand years ago have been found in Egyptian tombs; moulded glass vessels were made over two thousand years ago, though these were not common and were limited in size and shape. Much later the technique of blowing glass was discovered, and by the 1st century AD fine vases and vessels were made in the East and throughout the Roman Empire. Translucent panes of glass were made at this time; these were not completely colorless but had a blue or green tinge, which was caused by impure materials used in making the glass.

After the fall of the Roman Empire, glass-making in Europe declined and less skilled techniques were used. Glass-workers in Venice are first mentioned in the tenth century, and by the 13th century their beautiful products were famous. It is thought that they learned their skill through contact with the East or from monasteries where knowledge of old techniques had been handed down. The art was brought to perfection by Venetian craftsmen, and some of their techniques were so carefully guarded that they were only passed on from father to son.

In spite of the strict laws passed to protect the secrets of Murano, the Venetian techniques of glass-making gradually spread through Italy, France, England, and central Europe. Meanwhile, these countries had developed their own traditions and skills; and impure green glass was widely used, and from the fourteenth century Germany produced many beautiful glass vessels, although they were cruder and heavier than the Venetian ware.

Beautiful stained glass, dating from the eleventh century, is found in many of the cathedrals and churches of northern Europe. Sheet glass (for windows) was made in Germany in the 16th century; and the famous St. Gobain glass-works in France, founded in the late 17th century, made sheet glass mirrors.

In the eighteenth century, many beautiful objects of glass were made all over Europe. Techniques of cutting and engraving glass were perfected, and wealthy people filled their houses with elegant mirrors and chandeliers of skilfully cut glass.