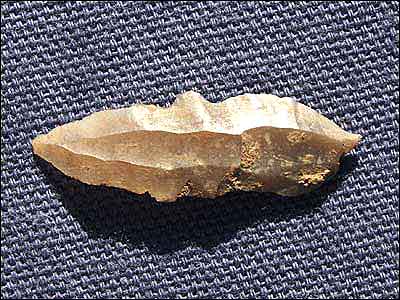 Flint is a granular variety of quartz (SiO2) of a fine crystalline structure, consisting mainly of chalcedony with some opaline silice. Flint is usually smoky brown or dark gray, although the variety known as chert is a paler gray. It commonly occurs in rounded nodules and is found in chalk or other sedimentary rocks containing calcium carbonate. Of great importance to early humans during the Stone Age, when struck a glancing blow, flint can be flaked, leaving sharp edges appropriate for tools and weapons; two flints struck together produce a spark which can be used to make fire. Hardness: nearly 7.