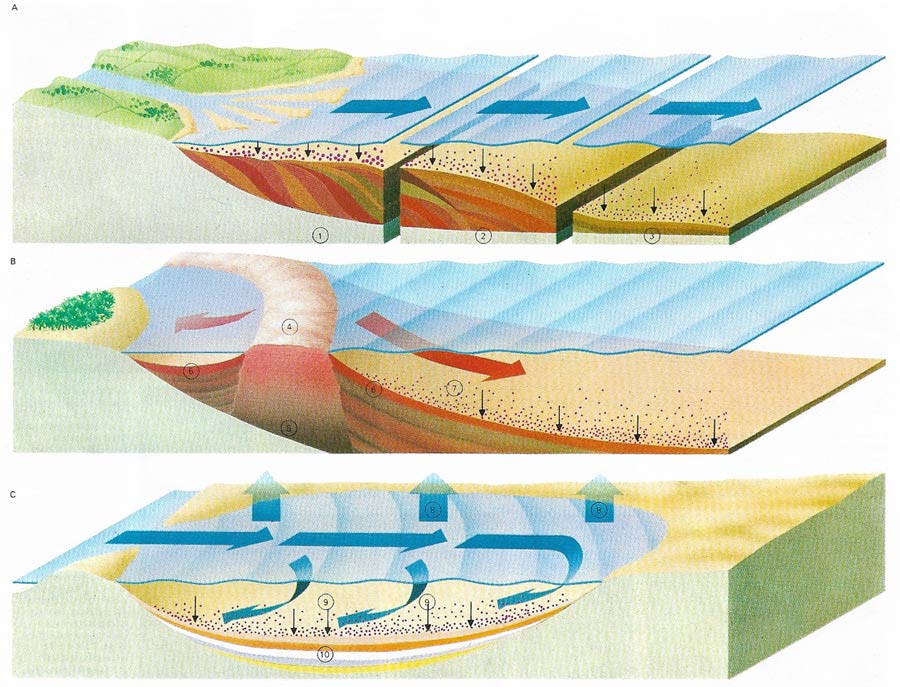 Fig 1. The three types of sedimentary rock are clastic (A), produced by erosion from older rocks; organic (B), formed by the decomposition of living matter; and chemical (C), formed from salts deposited by evaporation. (A) Erosion produces sand and mud which is brought down to the sea by rivers, deposited in deltas (1) and on the seafloor where it hardens into rock (2). Large grains are deposited inshore, fine mud (3) farther away – a common origin for clastic rocks. (B) On a coral reef, living coral (4) is found only near the surface. It rests on hundreds of meters of dead coral (5) and on both sides are piles of broken pieces of coral eroded by the waves (6). The shells of crustaceans also accumulate on the seafloor (7). All will form reef limestone, a typical organic rock. (C) Where a partially enclosed basin is found in the tropics the seawater is evaporated (8) and the salts in it deposited (9) forming chemical rocks (10). 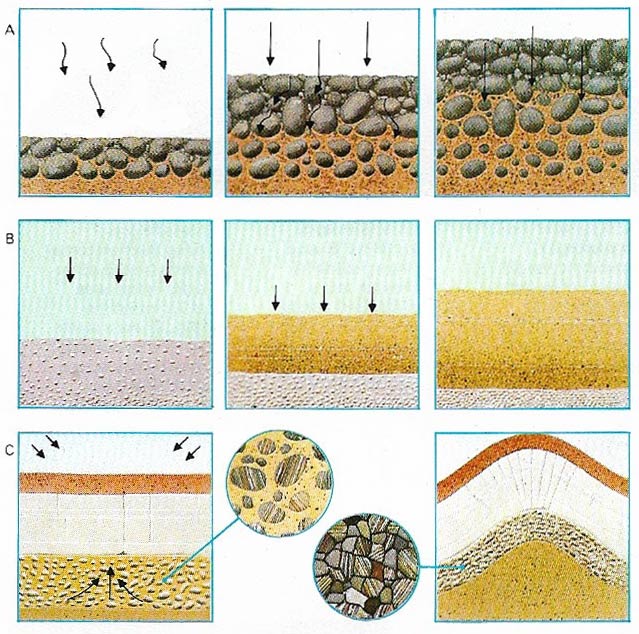 Fig 2. Three processes turn loose sediment into rock. Cementation (A) occurs where water percolates between grains, depositing thin layers of iron oxide, calcium carbonate or silica around grains. Grains are cemented together becoming sandstone. Compaction (B) occurs where water between grains of sediment is squeezed out by the weight of more sediment. By this means, clay becomes mudstone. The third process occurs during mountain building (C), when large forces cause the minerals of rocks to recrystallize in a solid mass leaving no spaces. This is a common occurrence in marbles..

Sedimentary rock is rock formed at or near the surface of the Earth or other planetary body from compacted sediments. Such sediments consist of solid rock or mineral fragments transported and deposited by wind, water, gravity, or ice; precipitated by chemical reactions; or secreted by organisms; accumulated as layers in loose, unconsolidated form.

Sedimentary rocks are divided into three types (Fig 1). The first, which is called clastic, is formed by fragments of older rocks; the second is organic, composed of the remains of animals and plants; and the third is chemical, produced by the precipitation of minerals and salts from water. Streams, moving ice, and waves break up older rocks into fragments, some large, like stones or boulders, some about 1 mm (0.04 in) across, like sand, and some too fine to see, which forms mud. Most of these are carried down to the sea by rivers and deposited in deltas or farther out in the seabed. Stones too large to be moved by the water remain near the heads of streams or on beaches and are eventually cemented together to form a rock known as conglomerate. Sand is deposited near the coast or on the continental shelf and eventually forms sandstone. Sands are also deposited by wind in desert environments. Mud is often carried far from shore to become clay or shale.

Organic sedimentary rocks may be made of plant remains, like coal, or from the hard parts of animals; many limestones are made of fossil shells and corals which have extracted lime from seawater to make their skeletons and, dying, have left their remains on the seafloor. In time, the movement of the sea wears the shells into fragments. Over a period of millions of years after burial, the fragments are compacted by weight and cemented to one another by various processes to give limestone. This is called lithification. Accumulation of lime is at present taking place in the Bahamas and the Persian Gulf, but in the past warm seas were much more extensive and limestone was produced over large areas. Chalk is made of countless small shells so minute that they can be seen only with a microscope. Seawater contains large amounts of salts and, if it is evaporated, they are precipitated out as lime is precipitated in a kettle. In tropical areas where hot, dry winds blow over shallow seas, much of the water is evaporated and lime forms on the seafloor, hardening to a fine grained limestone. If there is a partially enclosed basin, then not only lime but salts such as gypsum will be precipitated.

Sedimentary rocks are important because they provide oil, natural gas, coal, and building stone. They are of great interest, too, because they were formed at the Earth's surface and provide much evidence of its nature many millions of years ago. Fine red sandstone, for example, indicates the former presence of deserts. The study of ancient environments through the analysis of present-day rocks is called stratigraphy.

The other main types of rock are metamorphic and igneous. See also rock cycle.