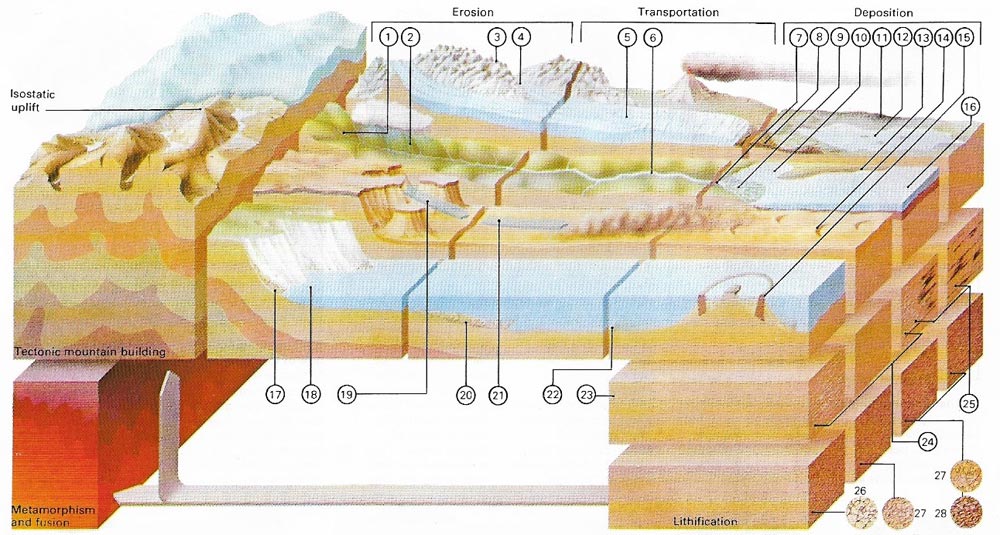 The sedimentary cycle begins when sedimentary, metamorphic, or igneous rocks are thrust toward the Earth's surface, at various times in their history, by mountain building, folding, and faulting, or the vertical uplift of land freed from the weight of glaciers after an ice age. Rock that becomes exposed to the chemical and mechanical agents of weathering will be rapidly eroded and deposited in new sites by a host of transporting mechanisms. Accumulating sediments possess characteristics that can positively identify the environment and the kind of rock found in their area of origin. They also acquire features that are clues to their environment of deposition, be it desert, swamp, lake bottom or seashore. Thus, black shales derived from finely-graded silt and mud can indicate a warm, humid climate and gentle conditions of deposition. As loosely deposited sediments build up they are transformed into hardened rock. The newly formed rock may be subjected to further pressure and heat and become metamorphosed or even melted and fused into igneous rock. Agents of erosion include rivers (1), rain (2), frost (3), glaciers (4), wind (19), waves (18), and gravitational effects (17). Transportation is performed by glaciers (5), rivers (6) wind (21), and ocean currents (20). Sediments may be deposited in rivers (7), deltas (9), lagoons (10), lakes (12), deserts (14), coral reefs (15), shallow and deep seas (16, 22), along shorelines (13), and by decelerating wind (11), and melting glaciers (8). Shells (24), plant debris (25), and remnants of other living organisms (23) may be added to sediments during deposition. Lithification (hardening process) occurs by compaction (28), cementation (27), and recrystalliization of fragments (26). 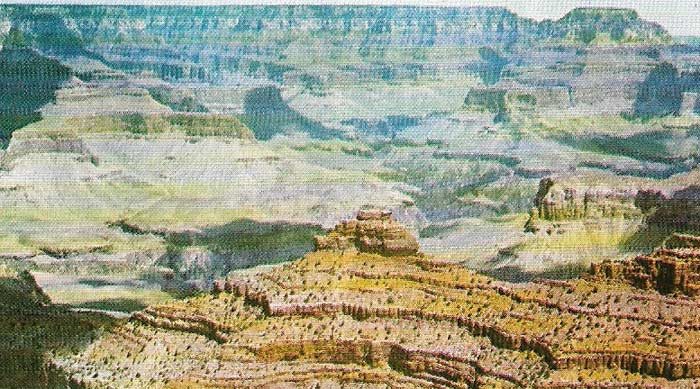 Fig 1. The Grand Canyon of Colorado reveals a massive section of the geological history of the Earth. Here, the swift-flowing Colorado River, laden with an estimated daily burden of some 500,000 tonnes of debris, has gouged a scar 1.9 km (1.2 miles) deep in the surrounding plateau. This erosive activity has been continuous since the Tertiary. The gradual but prolonged uplifting of the area caused the Colorado to cut a deep canyon in order to maintain its graded profile. In the canyon's plunging walls, hundreds of meters of sedimentary strata are exposed, consisting largely of marine limestones, freshwater shales, and wind-deposited sandstones. The lowest Paleozoic rocks rest unconformably upon a basement of plutonic and metamorphic Precambrian rock. The granites and schists of this rock are the roots of ancient mountains, their tops long ago eroded away. Radiometric datings have established these rocks as being some 1,600–1,800 million years old. Even a cursory inspection of the canyon is almost a complete course in paleogeology. Here can be witnessed the successive ages when submergence, uplift, erosion, deposition, and folding and faulting have occurred in the plateau. The fossil record ranges from primitive algae and trilobites through dinosaurs to remains of early camels and horses. 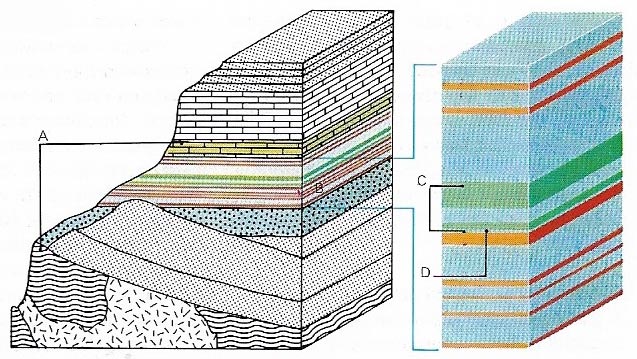 Fig 2. Rocks can be considered in terms of their stratigraphic units, of which the largest is the group. The Tonto Group of the Grand Canyon (A) is separated by distinct unconformities from the groups directly above and below. It in turn consists of three formations – bodies of rock that share certain generic features. The Bright Angel Formation (B) consists mainly of shales distinct from the limestone and sandstone formations above and below it. Formations can be subdivided into members such as the dolomite member (C), which are characterized by a distinct lithology. The smallest stratigraphic units of all are beds. The lower dolomite bed (D) is readily identifiable by the division planes between it and its neighbors both above and below. Abed may range in thickness from a few millimeters to several meters and some beds may contain even finer structures. 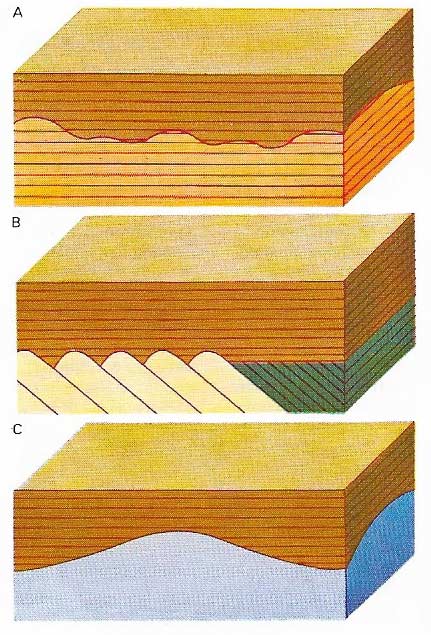 Fig 3. Unconformities occur when there is a break in sedimentation due to erosion. This creates a gap in the geological record of the Earth's history. Unconformities are of three varieties. Disconformities (A) are recognizable because the older strata have not been tilted or in any way deformed before younger rock was deposited above on the same horizontal plane. 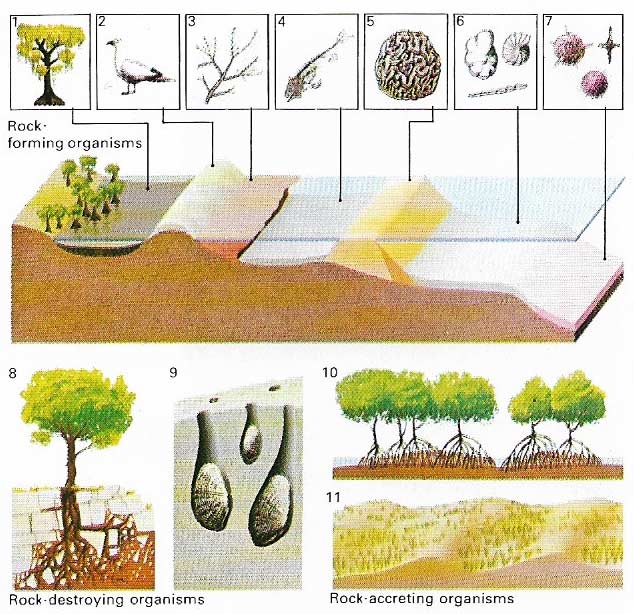 Fig 4. Living organisms may both create and destroy rocks. Some rocks are formed when decaying vegetation (1) becomes coal or when the droppings of bird colonies accumulate as phosphate deposits. In marine environments calcareous algae (3) form limestone deposits while fish skeletons (4) may accumulate as beds of phosphate. Corals (5) and tiny Globigerina skeletons (6) form limestone sediments while Radiolaria (7), which build their hard parts with silica, create siliceous deposits. Tree roots (8) and piddocks (9) hasten rock destruction. Mangrove (10) and dune grass (11) trap loose sediment that may harden. 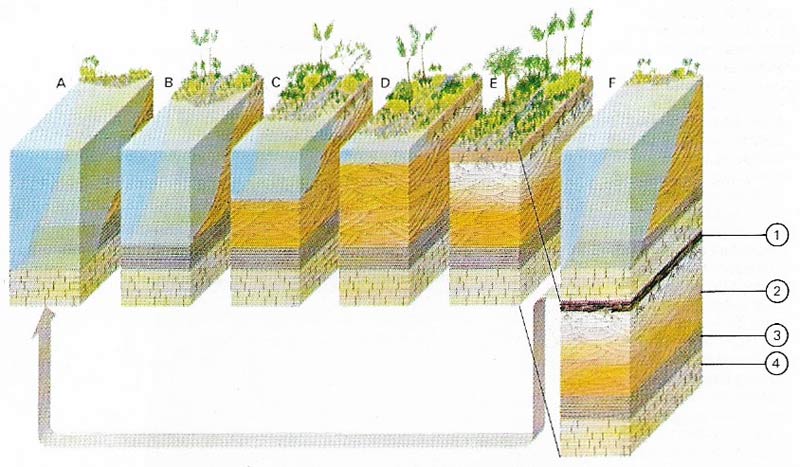 Fig 5. A delta's sediments are laid down in a specific order that may be endlessly repeated if the region of deposition is sinking. Limestone deposits (4) cover the seabed when the delta is too distant to be influential (A). As the delta encroaches (B), fine-grained muds that will become shale (3) are deposited, followed by coarser, sandstone-forming sediments (2) as the advance continues (C). As the water shallows, current bedding (D) indicates that sand is being deposited. Once the delta builds above water level (E) it can support swamp vegetation which forms coal (1). When the region sinks (F) the cycle restarts.

Stratigraphy is the study of layered rock (see stratum) to understand the sequence of geological events. It deals with the correlation of rocks from different localities using fossils and different rock types. Normally, older layers are on the bottom unless the sequence has been overturned or disrupted.

Earth's form a tattered and fragmented manuscript of our planet's past. Although sketchy in places, the historical record can be traced nearly 3,800 million years back in time. This date corresponds to the age of the oldest known rocks. The sedimentary strata in particular are ideal signposts through the past since their features identify the circumstances under which they were deposited and made into rocks.


Clues to the past

The record of geological history, preserved by sedimentary rocks is known as the stratigraphic column. It refers to the total succession of rocks, from the oldest to the most recent. The study of its distinguishing features is the science of stratigraphy, which deals with the definition and interpretation of stratified sedimentary rocks.

The science of geology was rescued from the futile perusal of biblical texts for clues to the Earth's past by the exposition of the principle of "uniformitarianism" by the Scottish geologist James Hutton (1726–1797). This was propounded in Hutton's work Theory of the Earth, published in 1795, and maintained that the nature of present geological processes was fundamentally similar to those of the past and that rock folds and tilts revealed in strata were caused not by violent upheavals, such as earthquakes, but by gradual pressures within the Earth. Uniformitarianism implies that the characteristic features of erosion (wearing down of rocks) and the transportation and deposition of sediments produced by erosion are the same throughout history. Since these features can easily be recognized in sedimentary rock laid down millions of years ago, past events are best interpreted in the light of what is known about the present. In Hutton's words, "the present is the key to the past".

The fundamental concept of stratigraphy is the law of superposition, which states that in any horizontal, undisturbed sedimentary sequence, the lowest rocks are older than those lying above them. This law applies not only to the relative ages of different strata but also to the minerals and fossils found within a specific layer. Lower-lying ones were deposited before those above them. Superposition is essential to establishing the comparative ages of the various beds in sedimentary formation and is the single most important prerequisite of geological mapping. In archeology the same principles apply. Artefacts and fossils found in deeper layers of Earth predate those in layers above them.

Igneous rocks (formed from molten magma), unlike sedimentary ones, are not laid down in neat successive layers. They can reach their underlying positions only by filtering up through existing formations while still in a molten state. These intrusive rocks, such as granite, gabbro, and diorite, are always younger than the rocks that surround them. However, when they reach the surface to form lavas – such as basalt, obsidian, and rhyolite (igneous rocks of very fine texture) – they are, as are sedimentary rocks, always younger than the rocks below them.

Since the complete stratigraphical column has never been discovered in any one site (it would have a thickness of many hundreds of kilometers), assembling its highly fragmented sections in correct order requires geological detective work to correlate widely scattered beds of rocks.

The most obvious tactic is to follow the layers of a specific outcrop as far as possible. This method is usually only possible over a limited area since erosion, deposition, and folding or faulting will tend to interrupt or obliterate rock outcrops (Fig 3). Another method of determining the extent of a formation is by searching for various similarities in the rocks. Various features of deposition, weathering, and mineralization all identify rocks that belong to the same formation. Correlations can also be established by comparing vertical sections of rock.

Fossils are an excellent tool for correlation (Fig 1). The most useful are those that are widely distributed but limited in their vertical range, thus indicating that they flourished for relatively brief periods of time. These are known as index or guide fossils.

As living organisms have always undergone continuous evolution, their fossil remains can be used to identify rocks of comparatively similar geological time. The fossil litter within sedimentary rocks enables paleontologists to recognize different strata of the same age. And it can be logically deduced from the law of superposition that the remains of primitive life forms occur in rocks lying beneath those containing more advanced forms.

Most fossils are the remains of organisms that lived in the same area and at the same time as the rock in which they are found was being deposited. They are excellent guides to the then existing environment. For instance, fossils of reef-building corals are an indication that clear, warm, shallow sea conditions prevailed.

One of the first attempts to relate fossils to the rocks in which they occur was made by the English surveyor William Smith in the late eighteenth century. He established the lateral or horizontal continuity that exists between scattered outcrops of rocks by identifying strata through their fossil content, as well as by their texture, color, and position.