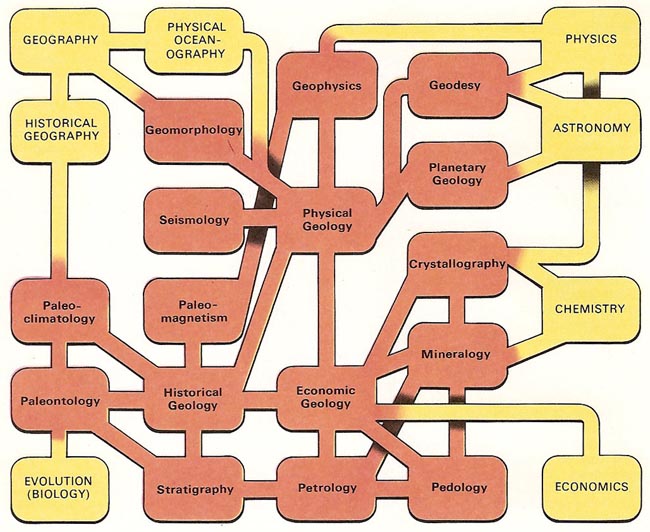 Branches of geology and allied sciences.

Geology is the group of sciences concerned with the study of Earth, including its structure, long-term history, composition, and origin.

This deals with the structure and composition of Earth and the forces of change altering them. The divisions that make up physical geology include mineralogy (the arrangement of minerals), petrology (the study of rocks and their combinations of minerals), geodesy, geomorphology, geophysics, and seismology (see earthquake). Much of modern physical geology is based on the theory of plate tectonics.

This deals with Earth in past ages, and with the evolution of life upon it. It embraces such sciences as paleoclimatology, paleomagnetism, paleontology, and stratigraphy, ; and relies heavily on dating, events being related to the geological time scale, whose derivation is primarily stratigraphical, to a lesser extent paleontological.

This lies between physical and historical geology, and borrows from both. Concerned with the location and exploitation of Earth's natural resources, it is generally taken to include the disciplines of crystallography, mineralogy, and petrology. Its practical manifestations are prospecting and mining.

Most early geological knowledge came from the experience of mining engineers, some of the earliest geological treatises coming from the pen of Georgius Agricola. The interest of the 6th century in fossils was also reflected in the writings of K. von Genner. In the 7th century the biblical timescale of about 6,000 yr from the Creation to the present largely constrained the many speculative "Theories of the Earth" that were issued. The centuries most notable geological observations were made by N. Steno. The late eighteenth century saw the celebrated controversy between Alfred Wegener's "Neptunism" and J. Hutton's "Plutonists" as to the origin of the rocks. The first decades of the nineteenth century, however, witnessed the decline of speculative geology as field observations became ever more detailed. William Smith (1769–1839), the "father of stratigraphy," show how the succession of fossils could be used to index the stratigraphic column, and he and others produced impressive geological maps. Charles Lyell's classic Principles of Geology (1830–33) restated the Huttonian principle of uniformitarianism and provided the groundwork for much of the later development of the science. Louis Agassiz pointed to the importance of glacial action in the recant history of Earth (1840), while mining engineering continued to contribute to the pool of geologic data. Among the most significant 20th century developments in the earth sciences was the acceptance of plate tectonics foreshadowed by Wegener's 1912 theory of continental drift.

Geologic time is the timescale of the history of the Earth, divided into periods of time millions of years long.

Geologists estimate that the Earth is at least 4.5 billion years old. Such an expanse of time is hard to grasp, but it is fundamental to understanding basic geologic processes, such as weathering and erosion, that have shaped the Earth over millions of years.

One way to think about geologic time is to condense the 4.5 billion years of Earth history into a single calendar year of 12 months. Using this scale, the oldest rocks discovered at the Earth's surface would date from mid-Mar. Very primitive life forms first appeared in the Precambrian seas in late November. Dinosaurs became dominant in mid-Dec, but disappeared the day after Christmas, at about the same time that the Rocky Mountains were uplifted. Creatures resembling humans appeared sometime during the evening of December 31. The last of the continental ice sheets began to recede from the Great lakes area about one minute and 15 seconds before midnight, and Columbus discovered America three seconds before midnight.

So far, we've been talking about time units. When we talk about rocks deposited during a general time period – for example, the Permian period, we call them Permian rocks. But a single time period can include many different types and layers of rocks. The Pennsylvanian Period, for example, covers the time from 320 to 290 million years ago, and a rock deposited early in that period may be entirely different from a rock deposited later on.

Arthur Holmes was a British geologist and geophysicist who studied the ages of rocks by measuring their radioactivity. He devised the first quantitative geological timescale in 1913 and estimated Earth's age by means of temperature measurement.