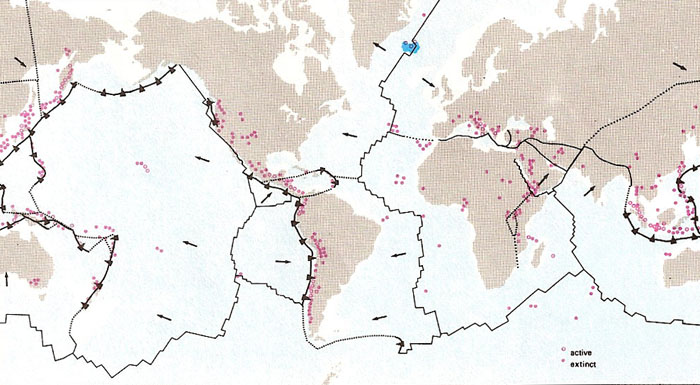 The discovery that the continents are carried along on the top of slowly-moving crustal plates provided the mechanism for continental drift theories to work. The plates converge and diverge along margins marked by seismic and volcanic activity. Plates diverge from mid-ocean ridges, where molten lava pushes up and forces the plates apart at a rate of up to 3.cm (1.5 in) a year; converging plates form either a trench (where the ocean plates sink below the lighter continental rock) or mountain ranges (where two continents collide).

Plate tectonics is the now widely accepted theory, formulated in the late 1960s, that Earth's crust and upper mantle, known collectively as the lithosphere, consists of moving pieces (plates) lying above a weaker semiplastic asthenosphere. About six large and more than a dozen smaller crustal (lithospheric or tectonic) plates make up the Earth's crust, all moving around the planet in different directions and at various speeds (fractions of an inch per year). Most plates lie beneath a combination of ocean and continent; several lie only beneath oceans.

Plate tectonics provides a convincing explanation for such phenomena as continental drift, earthquake activity, and the formation of mountain ranges and of chains of volcanoes. It does not appear to have played a significant role in the development of any other planet in the Solar System, although the Tharsis Region on Mars shows evidence of embryonic but stalled plate activity.

The complete mechanism for the movement of crustal plates remains uncertain. Scientists theorize that convection in the asthenosphere slowly carries the plates around the planet; another theory states that convection at a depth of about 600 to 700 km (376 to 435 miles) in the of the mantle called the mesosphere is transferred to the asthenosphere and moves the plates.

Crustal plates are created, destroyed, or move past each other in a variety of ways.

Plate movement in ocean basins includes sea-floor spreading – usually from volcanic action – and the ocean floor literally spreads apart. For example, the Mid-Atlantic Ridge is an area of sea-floor spreading that splits the Atlantic Ocean; the plates move laterally about 2.5 centimeters (1 inch) per year. Shallow, substantial earthquakes are associated with diverging plates.

When one plate sinks under another it is called subduction, with the subducting plate gradually breaking apart. For example, the Japan Trench off the island of Honshu is the line where the Pacific plate subducts under the Eurasian plate. Some of the largest and deepest earthquakes are associated with subducting plates.

Where two plates ram into one another the result is colliding plate boundaries, which cause the crust to buckle from intense pressure. For example, the Himalayas were formed by the collision of the Indo-Australian plate and the Eurasian plate. Deep, substantial earthquakes are associated with colliding plates. Even today, the Himalayas are still rising because of this collision – about 5 mm (0.2 in) per year.

When plates slide by each other, and no plate is created or destroyed, it is called a conservative margin or transform boundary plate. For example, along the San Andreas Fault in California, the Pacific plate slides northwest past the North American plate. (Contrary to popular belief, part of California will not fall into the ocean; rather part of the state is simply a section of the Pacific plate moving northwest at about 1.3 cm (0.5 in) per year.) Shallow, substantial earthquakes are associated with transform boundary plates.


Movement of crustal plates over time

Crustal plates have moved across the Earth for at least the past 600 million years – and probably for billions of years before. Scientists believe that a supercontinent called Pangaea existed about 250 million years ago. By 180 million years ago, Pangaea had broken up into Gondwanaland, or Gondwana (a hypothetical continent formed by the union of South America, Africa, Australia, India, and Antarctica), and Laurasia (composed of North America and Eurasia). About 65 million years ago – at approximately the time of the extinction of the dinosaurs – the two continents began to separate, slowly forming the familiar outlines of today's continents. Scientists estimate that in 50 million years, the west coast of North America will tear itself free from the mainland, Australia will move northward and collide with Indonesia, and Africa and Asia will split apart at the Red Sea.