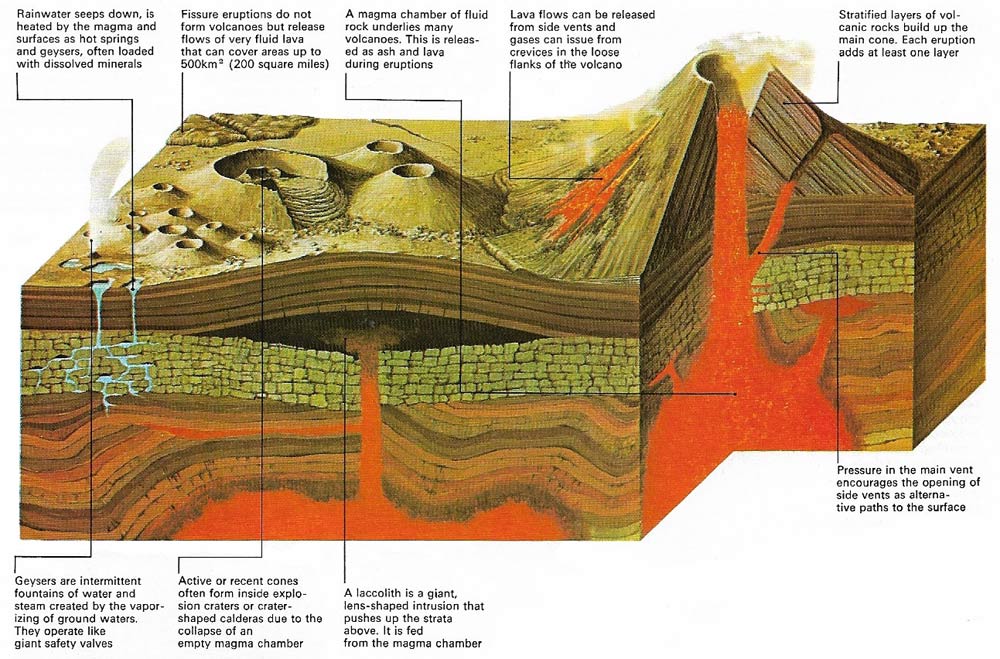 Volcanoes are fed by molten rock that rises from Earth's mantle. This material, called agma, may rise directly to the surface where it erupts, or can be stored in a magma chamber that swells up like a balloon before erupting. The magma rises through a chimney and eventually reaches the surface at the vent. Matter spewed forth as lava or ejecta (bombs and ashes) builds up a volcanic cone or volcano. Vent explosions caused by expanding gases often form craters shaped as inverted cones. The magma does not always reach the surface and often cools at depth forming plutons (large bodies), laccoliths (lens-shaped structures), dykes (that cut through the strata), and sills (injected between two strata). Volcanic regions are also characterized by hot springs, gas vents and, in some areas, by geysers. 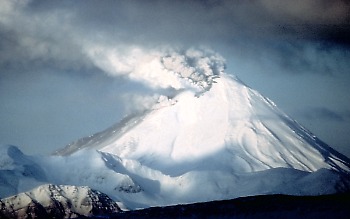 Fig 1. Snow-covered Kanaga Volcano in Alaska erupts a small column of tephra, gas, and steam. Kanaga is a stratovolcano. View is toward the west. Credit: E. Klett / US Fish and Wildlife Service. 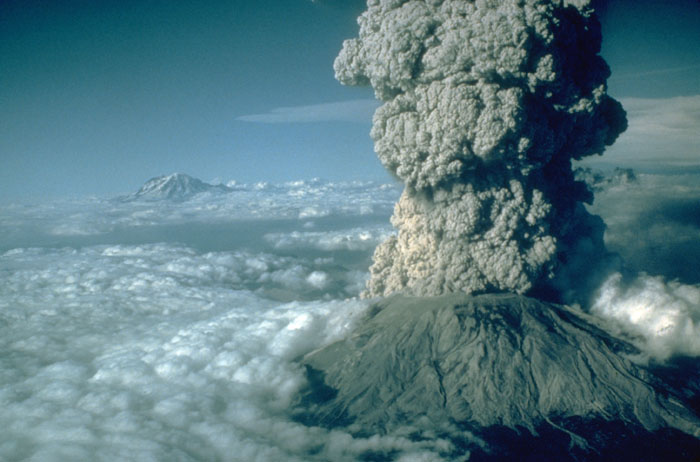 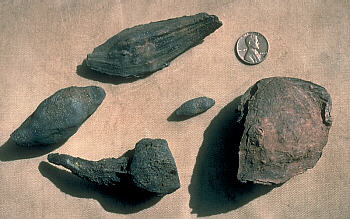 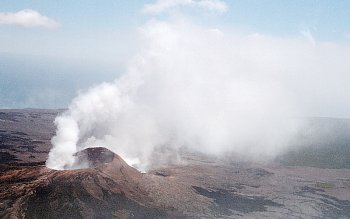 Fig 4. Sulfur dioxide and other volcanic gases rise from the Pu'u O'o vent on Kilauea Volcano, Hawaii. During periods of sustained eruption from Pu`u O'o between 1986 and 2000, Kilauea emitted about 2,000 to 1,000 metric tonnes of irritating sulfur dioxide each day. Credit: K. A. McGee / US Geological Survey. 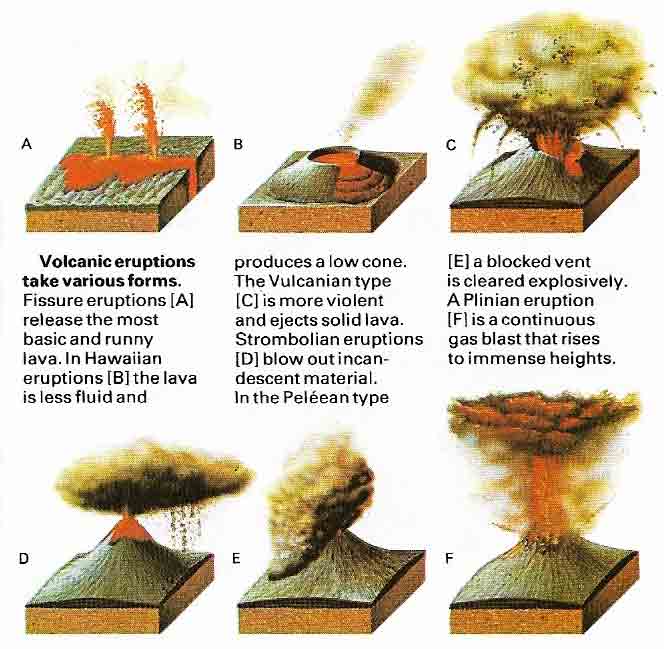 A volcano is a vent at Earth's surface through which magma (molten rock) and associated gases erupt, and also the cone built by effusive and explosive eruptions. Volcanoes also occur on other planets (such as Venus) and moons (such as Io).


When a volcano is considered active

Surprisingly, there is no consensus among vulcanologists on how to define an active volcano. The lifespan of a volcano can vary from months to several million years, making such a distinction sometimes meaningless when compared to the lifespans of humans or even civilizations. For example, many of Earth's volcanoes have erupted dozens of times in the past few thousand years but are not currently showing signs of activity. Given the long lifespan of such volcanoes, they are very active. By our lifespans, however, they are not. Complicating the definition are volcanoes that become restless but do not actually erupt. Are these volcanoes active?

Scientists usually consider a volcano active if it is currently erupting or showing signs of unrest, such as unusual earthquake activity or significant new gas emissions. Many scientists also consider a volcano active if it has erupted in historic time. It's important to note that the span of recorded history differs from region to region; in the Mediterranean, recorded history reaches back more than 3,000 years but in the Pacific Northwest of the United States, it reaches back less than 300 years, and in Hawai`i, little more than 200 years.

Dormant volcanoes are those that are not currently active (as defined above), but could become restless or erupt again.

Extinct volcanoes are those that scientists consider unlikely to erupt again. Whether a volcano is truly extinct is often difficult to determine. For example, since calderas have lifespans sometimes measured in millions of years, a caldera that hasn't produced an eruption in tens of thousands of years is likely to be considered dormant instead of extinct. Yellowstone caldera in Yellowstone National Park is at least 2 million years old and hasn't erupted for 70,000 years, yet scientists do not consider Yellowstone as extinct. In fact, because the caldera has frequent earthquakes, a very active geothermal system, and rapid rates of ground uplift, many scientists consider it to be a very active volcano!

The volcanic explosivity index (VEI) is a method that vulcanologists use to classify the scale of volcanic eruptions. Devised in 1982 by Chris Newhall of the US Geological Survey and Stephen Self of the University of Hawaii it gauges the relative violence of different eruptions. Factors that go into determining the VEI are the volume of material thrown out, the height of the cloud of debris from the eruption, and qualitative observations about the nature of the explosion. The VEI range goes from 0, for a non-explosive, gentle burbling or spraying of lava, to 8 in the case of the most prodigious, cataclysmic supervolcanoes.

One of the most talked-about volcanic eruptions in modern times was that of Mount St. Helens, a lofty peak lying 150 km south of Seattle, in Washington state (Fig 2). At 8:32 am on Sunday, May 18, 1980, about 3 km3 of the mountain came crashing down in a massive rock debris avalanche triggered by an earthquake measuring 5.1 on the Richter scale. Nearly 600 km2 of forest was flattened by the fiery blast wave or buried beneath volcanic deposits, 57 people were killed, and 300 km of highway were destroyed. At the same time a forbidding mushroom cloud of ash rose thousands of meters into the atmosphere and drifted downwind, darkening the sky and raining thick, gray ash over eastern Washington and beyond. The eruption lasted 9 hr, but Mount St. Helens and the surrounding terrain were altered beyond recognition within moments.

An eruption of a very different kind has been going on, in fits and starts, in Hawaii since January 1983. For more than a quarter of a century, Kilauea has been erupting – non-violently, but ejecting in total more material than Mount St. Helens managed in its sudden spectacular outburst. A new vent opened at Kilauea as recently as March 2011, sending lava shooting 20 m into the air.

Both Kilauea and Mount St. Helens are dwarfed, however, in the amount of magma, rock fragments, and dust erupted, by two other volcanic extravaganzas in the twentieth century. These were the eruptions of Pinatubo in the Philippines in 1981, and Novarupta in the Alaska Peninsula in 1912, which threw out an estimated 10 and 12 km3 of material, respectively, giving them a volcanic explosivity index of 6 (corresponding roughly to 10 to 100 km3 of erupted matter). Along with the 10 billion tonnes of magma which spewed out of Pinatubo were 20 million tonnes of sulphur dioxide. This gas was oxidized in the atmosphere and formed a global haze of sulfates and sulfuric acid, the effect of which was to cut the amount of solar radiation reaching the Earth's surface by about 10% and reduce temperatures worldwide by about half a degree Celsius. At the same time, ozone levels at mid-latitudes reached their lowest recorded levels, while in the southern hemisphere winter of 1992, the ozone hole over Antarctica widened to its largest ever size up to that point.

But even Pinatubo and Novarupta are small fry compared with other volcanic monsters of the past. In 1883 the island of Krakatoa in Indonesia blew apart, killing at least 40,000 people and throwing out 20 km3 of rock, ash, and pumice, in an ear-splitting explosion that was heard 3,500 km away in Perth, Australia, where it was mistaken for cannon-fire. Barograph readings showed that the pressure wave from the event traveled around the Earth 7 times before finally fading out. The settlement of Merak on the northwestern tip of Java was washed away in seconds by a tidal wave towering almost 50 m high, and ships as far away as South Africa were rocked as the residues of powerful tsunamis buffeted their hulls.

More violent still was the destruction of Santorini (known to the Greeks as Thera), a small island in the Aegean, 3,600 years ago. A giant central lagoon is all that remains of the great volcano that erupted in about 1620 BC spewing vast clouds of dust and ash, and generating a huge tidal wave that inundated the nearby island of Crete. This is the event, some historians believe, that triggered the demise of one of the world's great early civilizations – the Minoans. The blow-up of Santorini, it's also been theorized, may be the historical counterpart to the legend of Atlantis. At least 30 km3 of magma, rock bombs, dust and other debris poured out of Santorini, ranking the eruption among the top seven or eight biggest of the past 10,000 years, and making it perhaps the most influential in terms of its effects on the course of Western history.

In more modern times, an eruption in Iceland had not only global climatic effects but eventually led to the deaths about 20% of the island's population and many more people beyond. Air travelers were made painfully aware in 2010 of the ability of Icelandic volcanoes to influence affairs far beyond their shores. But the recent discharge of lava beneath the Eyjafjallajokull glacier which caused billowing clouds of fine ash to puther across northern and western Europe, grounding flights for days on end, was nothing compared to the eruption of Laki 227 years earlier.

On June 8, 1783, Laki, a volcanic fissure in the south of Iceland was ripped apart with such force that it gave rise to scores of lava-spewing craters. Over the next eight months the craters of Laki (known locally as Lakagigar) poured forth enough lava to bury 600 km2 of the surrounding countryside and belched more toxic gases into the atmosphere than any eruption in the past century and a half. Laki's outpouring of sulfur dioxide dwarfed that of Pinatubo in 1990, itself famous for temporarily putting the brakes on global warming. Pinatubo's total SO2 output of about 20 million tonnes was matched by Laki every three days at the peak of its activity.

A great cloud of sulfuric acid droplets began to drift over Europe and then further eastwards until it affected the entire northern hemisphere. In Germany, France, and Britain, people began choking on the mysterious fog, the sulfuric acid corroding their lungs, even though no one at the time had any clue what was causing the illness. In Britain alone, parish records suggest that 20,000 deaths, many of them of farm laborers, were attributable to the toxic cloud in the summer of 1783. July of that year also equaled the warmest month in three centuries, and was followed, courtesy of the build-up of radiation-reflecting sulfates in the stratosphere, by one of the coldest winters on record.

Nowhere, though, were the consequences more dire than in Iceland itself. The poisonous gases from Laki decimated vegetation across the island, which in turn led to the starvation of much of the livestock. Half of the cattle and horses, and eighty percent of the sheep, perished.

It's hard to image that there could be volcanic eruptions which dwarfed those of Laki, Krakatoa, and Santorini. But there were – and there will be again.

A volcanic block is a solid rock fragment greater than 64 mm in diameter that was ejected from a volcano during an explosive eruption. Blocks commonly consist of solidified pieces of old lava flows that were part of a volcano's cone.

A volcanic bomb is a lava fragment that is ejected while viscous (partially molten) and larger than 64 mm (2.6 in) in diameter (Fig 3). Many volcanic bombs acquire rounded aerodynamic shapes during their travel through the air. Volcanic bombs include breadcrust bombs, ribbon bombs, spindle bombs (with twisted ends), spheroidal bombs, and "cow-dung" bombs.

Magma contains dissolved gases that are released into the atmosphere during eruptions (Fig 4). Gases are also released from magma that either remains below ground (for example, as an intrusion) or rises toward the surface. In such cases, gases may escape continuously into the atmosphere from the soil, volcanic vents, fumaroles, and hydrothermal systems.

The most common gas released by magma is steam (H2O), followed by CO2 (carbon dioxide), SO2 (sulfur dioxide), (HCl) hydrogen chloride, and other compounds.