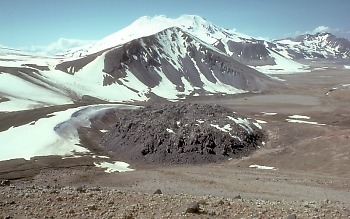 Volcanic dome atop Novarupta vent, Valley of Ten Thousand Smokes, Katmai National Park and Preserve, Alaska. The dome was erupted from the same vent that expelled about 15 km3 of magma in an enormous explosive eruption in 1912. Credit: US Geological Survey.

A volcanic dome is a rounded, steep-sided mounds built by very viscous magma, usually either dacite or rhyolite. Such magmas are typically too viscous (resistant to flow) to move far from the vent before cooling and crystallizing. Domes may consist of one or more individual lava flows. Volcanic domes are also referred to as lava domes.

The longest historical dome-building eruption is still occurring at Santiaguito Dome, which is erupting on the southeast flank of Santa Maria volcano in Guatemala; the dome began erupting in 1922.

Domes often erupt on the top and sides of stratovolcanoes. Of the 1,511 volcanoes known to have erupted in the past 10,000 years, only 40 are classified as independent volcanic domes not associated with another volcano.

The volcanic dome in the Cascades is Lassen Peak in northern California. Lassen Peak is part of a larger volcanic center, and its most recent eruption between 1914 and 1917 added a new lava flow to its summit.

Three of the most active stratovolcanoes in the Cascades – Mount St. Helens, Mount Shasta, and Glacier Peak – have erupted lava domes at their summits. Before the 1980–1986 eruption of Mount St.Helens, its symmetrical summit cone was capped by a lava dome erupted between the 1500's and late 1700's.

Although volcanic domes are built by nonexplosive eruptions of viscous lava, domes can generate deadly pyroclastic flows. The sides of a dome or an erupting lava flow on a dome can collapse down a steep slope to form a hot avalanche of hot lava fragments and gas (pyroclastic flow). Recent eruptions of lava domes at Unzen volcano in Japan and at Soufriere Hills in Montserrat have forced thousands of people from their homes. Some domes erupt obsidian, which is volcanic glass that may form in rhyolite or dacite lava flows. Most obsidian is black, but red, green, and brown obsidian is known. Obsidian forms when magma is cooled so quickly that individual minerals cannot crystallize.