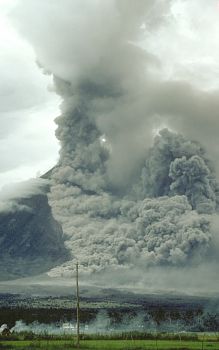 Pyroclastic flow sweeps down the side of Mayon Volcano, Philippines, during an explosive eruption on September 15,1984. Note the ground-hugging cloud of ash (lower left) that is billowing from the pyroclastic flow and the eruption column rising from the top of the volcano. Credit: C. Newhall / US Geological Survey.

'Pyroclastic' is a term that describes any rock fragments thrown out by volcanic activity, generally in association with some violent explosive action. Pyroclasts normally include solidified lava left behind by a previous eruption of the volcano, as well as rocks from the crust, small pieces of cinders, ash, and dust. The largest pyroclastic fragments, known as volcanic bombs, weigh several tons. Smaller pieces are known as lapilli. When the pyroclastic activity stops, outpourings of lava often follow. Rocks formed by consolidation of these pyroclastic fragments, such as volcanic breccia and tuff, are also termed pyroclastic.

A pyroclastic flow is a ground-hugging avalanche of hot ash, pumice, rock fragments, and volcanic gas that rushes down the side of a volcano as fast as 100 km/h or more. The temperature within a pyroclastic flow may be greater than 500°C, sufficient to burn and carbonize wood. Once deposited, the ash, pumice, and rock fragments may deform (flatten) and weld together because of the intense heat and the weight of the overlying material.