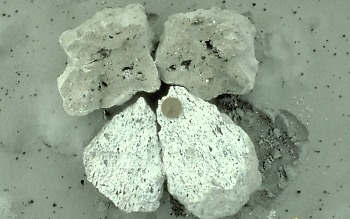 Pumice is a light, porous volcanic rock that forms during explosive eruptions. It resembles a sponge because it consists of a network of gas bubbles frozen amidst fragile volcanic glass and minerals. All types of magma (basalt, andesite, dacite, and rhyolite) will form pumice. It is used as an abrasive for smoothing and polishing, an absorbent, an aggregate, and a railroad ballast. Pumice was also used by the ancient Romans as a building stone; it occurs later, too, in Byzantine and Romanesque structures.

Pumice is similar to the liquid foam generated when a bottle of pressurized soda is opened – the opening depressurizes the soda and enables dissolved carbon dioxide gas to escape or erupt through the opening. During an explosive eruption, volcanic gases dissolved in the liquid portion of magma also expand rapidly to create a foam or froth; in the case of pumice, the liquid part of the froth quickly solidifies to glass around the glass bubbles.