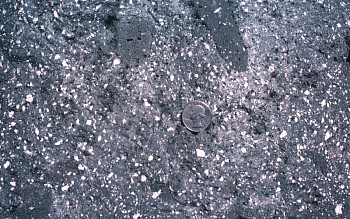 Close view of dacite lava from the May 1915 eruption of Lassen Peak, California. Credit: US Geological Survey.

Dacite is an igneous, volcanic rock with a high iron content. Dacite lava is most often light gray, but can be dark gray to black. Dacite lava consists of about 63 to 68% silica (SiO2). Common minerals include plagioclase feldspar, pyroxene, and amphibole.

Dacite generally erupts at temperatures between 800° and 1000°C. It is one of the most common rock types associated with enormous Plinian-style eruptions. When relatively gas-poor dacite erupts onto the surface of a volcano, it typically forms thick rounded lava flow in the shape of a dome.

Even though it contains less silica than rhyolite, dacite can be even more viscous (resistant to flow) and just as dangerous as rhyolites. These characteristics are a result of the high crystal content of many dacites, within a relatively high-silica melt matrix. Dacite was erupted from Mount St. Helens 1980–86, Mount Pinatubo in 1991, and Mount Unzen 1991–1996.

The word dacite comes from Dacia, a Roman province found between the Danube River and Carpathian Mountains, where the rock was first described.