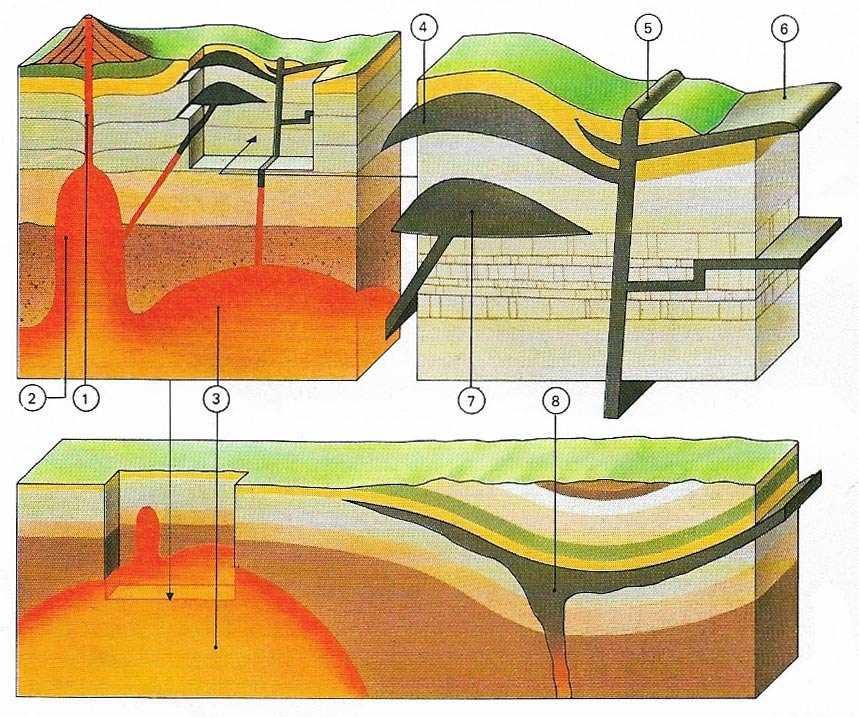 Fig 1. Many different shapes of igneous rocks exist. A neck (1) is a circular, vertical feed channel of a volcano. A stock (2) is a large mass of rock jhich solidified at great depth. A batholith (3) is a large body of granite with no detectable bottom. A laccolith (4, 7) is a dome-shaped mass which has arched up the rock above. A dike (5) is a vertical sheet-like mass of rock and a sill (6) is a horizontal sheet-shaped body of rock. A lopolith (8) is a saucer-shaped mass of rock. 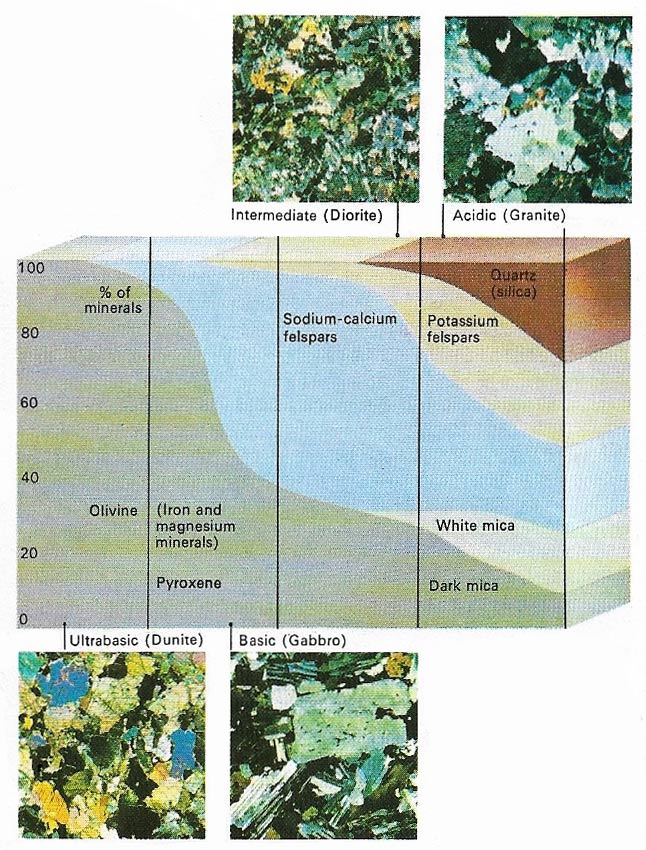 Fig 2. Igneous rocks comprise many different types of minerals in which the quantity of silica (SiO2) determines the acidity of the rock and thus its classification. This proportion of silica determines the type and proportion of the minerals present. Thin rock sections examined by polarized light reveal the individual minerals in distinctive colors, helping to identify them and to classify the rock.

Fig 3. Intrusive rocks can often be identified with the unaided eye. Granite (A) contains a great deal of free silica in the form of quartz, giving the rock a light color. Diorite (B) is darker, having less quartz and a quantity of dark minerals. These dark minerals, such as olivine and pyroxine, are more common in gabbro (C). The light-colored minerals in this are feldspars. Ultrabasic rocks, such as dunite (D), consist almost entirely of dark ferro-magnesium minerals.

The term 'igneous' describes rocks or minerals that have solidified from molten or partly molten material called magma. Igneous (Latin, ignis = a fire) rock is extrusive if it formed on the surface of the Earth or other planetary body, and intrusive if it solidified deep underground. All igneous rocks are crystalline: if they cooled slowly from magma their crystals are large; if they cool fast their crystals are small. In addition to grain size, the other important differences in igneous rocks are related to the chemical content of the minerals in the rock (see section on classification below).

Igneous rocks that cooled on the surface are termed extrusive. The magma from which they are formed may vary in composition and properties. Viscous magma forms massive steep-side mountains – the familiar cones of many volcanoes. Pockets of trapped gas eventually escape causing violent explosions. Fragments of half-cooled rock are then thrown into the air. Sometimes the lumps are quite large – 20 to 30 cm in length. These are volcanic bombs. As they descend, they twist and turn, and the soft rock becomes spindle-shaped. Smaller particles are called lapilli, meaning "little stones," while the finest dust forms volcanic ash. The molten rock itself flows as a lava and solidifies, giving off gases. Small cavities or vesicles may, as a result, be formed inside this rocky giving a frothy appearance. Pumice stone is a well known example of this phenomenon.

If the magma is more fluid, instead of forming steep volcanoes, it flows into thin sheets over very large areas. The islands of Hawaii are made up of such sheets of basalt, a dark, easily-flowing lava.

As a rule all extrusive rocks are predominantly glassy since they cool too rapidly for crystals to form.

Some magma never reaches the surface but cools within the Earth. The igneous rocks formed are then termed intrusive. If the magma was injected into sedimentary layers along bedding planes, the igneous sheet formed is called a sill and is said to be conformable with the surrounding rock. Sometimes, the magma forces its way across strata at angles to the bedding planes. These structures are called dikes and are said to be unconformable.

It may happen that the magma is forced through a comparatively small aperture in the layers and reaches an area where it is actually able to lift up the layers of overhead rock. A bun-shaped intrusion or laccolith is then formed. Alternatively the magma may cause strata beneath it to sag, in which case a basin-shaped intrusion or lopolith develops. Laccoliths and lopoliths are often very rich in valuable minerals. A large lopolith at Sudbury, Ontario, produces nearly three-quarters of the world's nickel.

Dikes, sills, and lava flows come from huge chambers of magma that may be several kilometers below the surface. Usually the magma cools at an intermediate rate producing an intermediate structure, either a glassy base containing a few large crystals or a ground mass of very fine crystals. Such rock is described as hypabyssal. In some areas, the igneous activity finished many millions of years ago, so that even the magma chambers themselves have solidified. Rocks cooled at such great depths below the surface are called plutonic after the Roman god of the underworld, Pluto. The time taken for solidification to be completed may be millions of years. Crystals large enough to be seen with the naked eye are able to form. Examples of such crystalline rocks are granite, usually light-colored (pink or gray), and the dark, heavy gabbros.

Erosion may lay bare these old magma reservoirs. When of great size they are called batholiths. Sometimes the roof of the batholith extends upward into many domes. One of the largest batholiths, in the United States, is over 1,500 kilometers long and 240 kilometers wide.

The elements silicon and oxygen readily combine to form silicon dioxide or silica (SiO2). This is a very important mineral. In a molten state it behaves as an acid, combining with any metallic oxides present to form a very common and important group of minerals – the silicates.

The quantity of silica present in the original magma is used in classifying the resulting igneous rock (Fig 2). If a lot of silica is present (more than about two-thirds), it will combine with all the metal oxides present, and some free silica will remain. Rocks of this type are said to be acidic. If only a small quantity of silica remains in the uncombined state, the rocks are described as intermediate. The so-called basic rocks have even less silica and none of it remains in the free state. Finally, there are sometimes found heavy, dark, ultra-basic rocks, so poor in silica that none of the metal oxides is completely converted to silicates.

All four types of rock may cool either slowly, deep in the crust (plutonic) rapidly on the Earth's surface (volcanic) or at an intermediate speed near the surface (hypabyssal).