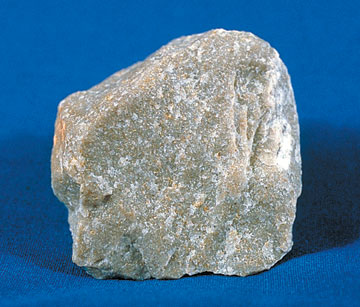 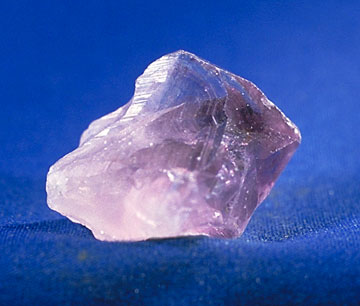 Quartz is a hard mineral that is a crystalline form of silica (silicon dioxide, SiO2). It is colorless when pure – a form also known as "rock crystal".

Quartz is a constituent of many rocks, especially igneous rocks such as granite and quartzite, metamorphic rocks such as gneisses and schists, and sedimentary rocks such as sandstone and limestone. It is the second most abundant mineral on Earth after feldspar.

Quartz crystallizes in the trigonal system. A well-formed quartz crystal consists of a six-sided prism that terminates in six-sided pyramids (Fig 1). Quartz is usually colorless and transparent, in which form it is called rock crystal. Colored varieties,a number of which are used as gemstones, include amethyst, citrine (yellow), rose quartz (pink), milk quartz (white), smoky quartz (brown), agate, jasper, onyx, carnelian, and chalcedony. It has a hardness of 7 on Mohs scale; relative density 2.65.

A quartz crystal produces electricity through the piezoelectric effect when a mechanical stress is applied to it. This has led to the use of quartz for making oscillators for clocks, radios, and radar instruments. Quartz is also used in optical instruments and in glass, glaze, and abrasives.

Amethyst is a variety of quartz, differing from common quartz (or rock-crystal) chiefly in its beautiful violet-blue or purplish violet color – well known as amethystine – which is due to the presence of a little iron oxide or, possibly, manganese oxide. It is one of the most valued varieties of quartz, and is much used for rings, etc, although, being comparatively abundant, it is much inferior in price to the true gems. An amethystine tinge is frequently to be seen in specimens of quartz which are not perfect amethyst. The tinge is often very faint, and is frequently confined to the tips or edges of crystals.

Amethyst is found chiefly in Brazil, Uruguay, Russia (the Urals), Canada (Ontario) and the United States (Arizona and North Carolina). It is, however, a common mineral in Europe. Some of the finest specimens have been found in India, Sri Lanka (previously Ceylon), and Brazil. It is often found lining the interior of balls of geodes of agate, and in veins and cavities in basalt, dolerite (diabase), and other igneous rocks.

The ancients imagined amethyst to possess the property of preventing intoxication, and people addicted to drinking therefore wore in on their necks. The named is derived from a Greek word which signifies unintoxicated.

Not to be confused with amethyst is a mineral called oriental amethyst, which is a variety of spinel having an amethystine color, and is a very valuable gem.

Quartzite is a hard, massive metamorphic rock resulting from sandstone in which the quartz grains have recrystallized (Fig 2). It is typically colored white, light gray, or yellow, but it also comes in green, blue, purple, and black varieties that contain other minerals. Tough and resistant to weathering it is used in road metal.

Stishovite is a dense, high-pressure phase of quartz that has so far been identified only in shock-metamorphosed, quartz-bearing rocks from meteorite impact craters.