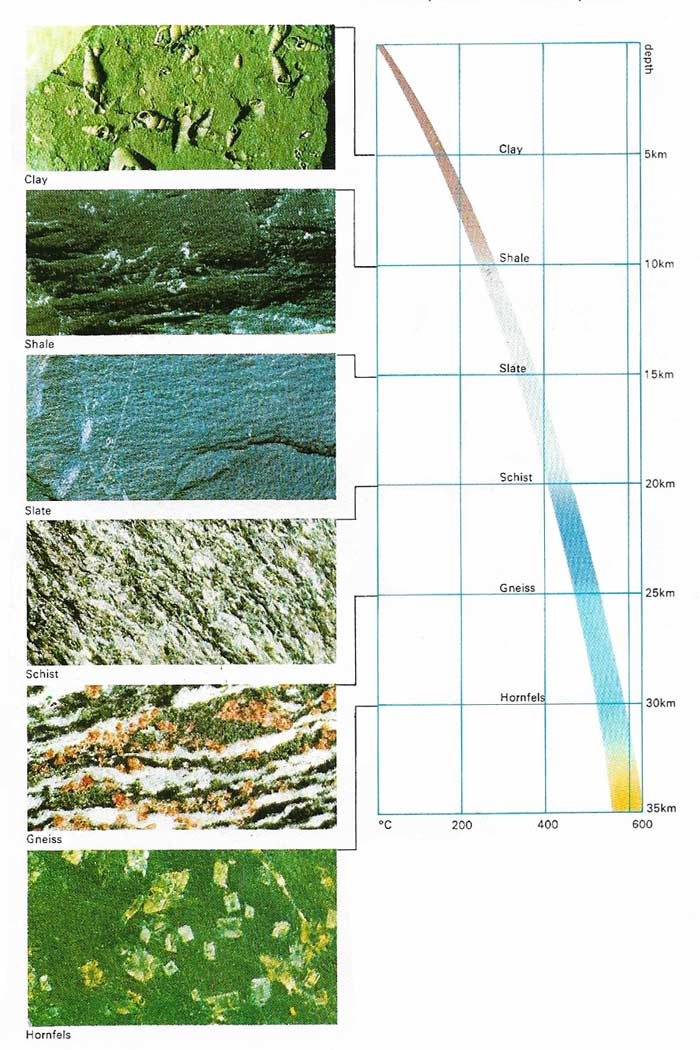 Fig 1. Pressure and heat on old, deeply buried rocks produces regional metamorphism. The temperature and pressure increase with depth of burial, causing new minerals to grow in the rock, and the size of the mineral crystals increases with depth. Clay is made of very small crystals, but gniess has 2 cm-long (0.75 in) crystals. Minerals grow in the direction of least pressure, which means they are aligned and will split easily one way. Hornfels does not show lineations. 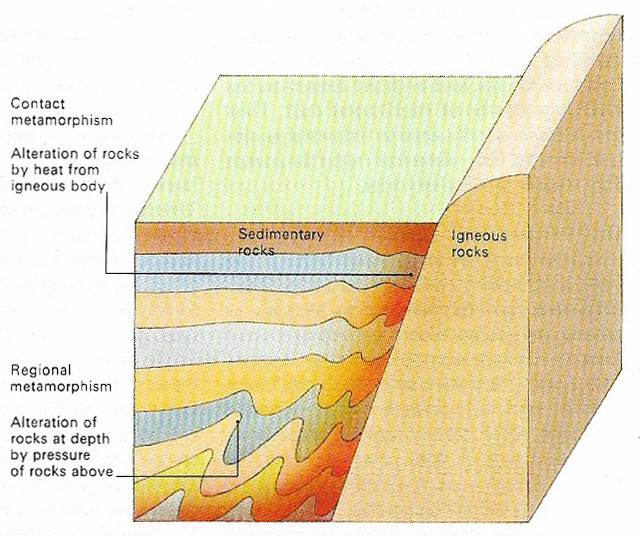 Metamorphic rock is sedimentary or igneous rock that has been recrystallized as a result of changes in temperature, pressure, and chemical environment. Schist, for example, is metamorphosed basalt or slate.

Heat from upsurging magma may alter the crystalline form or even the mineral constitution of the surrounding rocks. This process is described as thermal metamorphism. Shales, for instance, may be altered into hornfels, granites to layered gneiss, and limestone recrystallized into marbles.

Metamorphism of surrounding rock may often be used to tell whether an igneous layer is a sill or lava flow which has become covered with later sediments. In the case of the sill, thermal metamorphism will have taken place on either side of the intrusion; a lava flow will metamorphose only the rocks beneath since its upper surface is in contact with the open air. About large intrusions, a surrounding zone (or aureole) of thermally metamorphosed rock may be several kilometers thick.

Though pressure alone can bring about a few mineral transformations, its more noticeable effect is in causing new slatey or needle-like minerals to crystallize with their flat faces or long axes at right angles to the pressure. In this way, roofing slates are formed from shales. The so-called slatey cleavage possessed by slates is thus in no way connected with the original bedding planes of the sediments. Change caused by pressure is termed dynamic metamorphism. Often, heat and pressure combine on a large scale causing alteration in rocks over great areas. This regional metamorphism, and is an important feature of mountain building.

For a long time it was a mystery as to what had happened to the country rock in regions where batholiths had formed. Huge batholiths, many hundreds of square kilometers in surface area, are not uncommon. Where is the original rock? It is now believed that the surrounding rock, or rather the material of which it is composed, is still present in the batholiths Under the influence of increased temperature, possibly caused by the seeping in of hot rock from even further beneath, the country rock itself developed into a magma. This process is called ultra-metamorphism. Thus a cycle is complete. Igneous rocks form from a magma. They are eroded and give rise to sedimentary rocks. These under intense temperatures may be reconverted to magma from which more igneous rock can develop.

Contact metamorphism is the recrystallization of rocks surrounding an igneous intrusion in response to the heat supplied by the intrusion. There is no significant increase in pressure and the affected rocks do not melt in the process.

A third, rare type of metamorphism is dislocation metamorphism, caused by large areas of rock moving past one another. The pressure shatters the rock and the friction is so great that the rock is partially melted, producing a rock called mymlonite. It occurs only in narrow strips, of which the Lizard, in Cornwall, England, is an example.