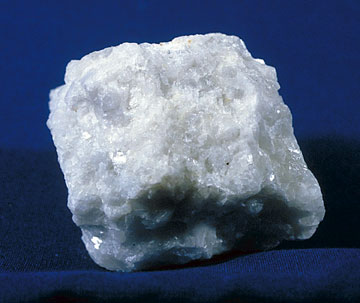 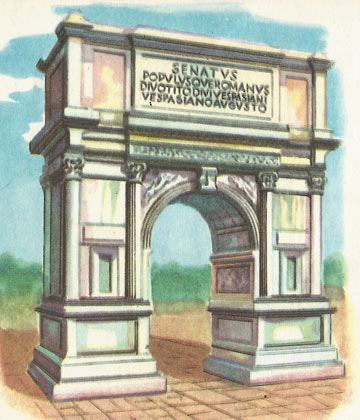 Titus' Arch in Rome, made of Pentelic marble. 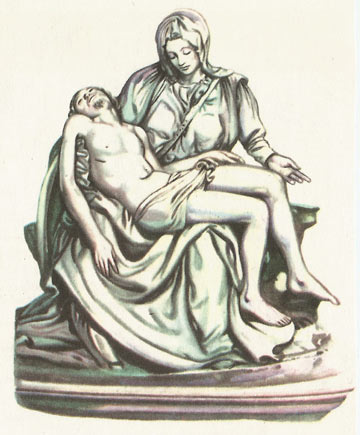 Marble is a metamorphic rock composed largely of recrystallized limestones and dolomites. The term is used more loosely to refer to any crystalline calcium carbonate (CaCO3) rock that has a good pattern and color when cut and polished.

The color is normally white, but when tinted by serpentine, iron oxide, or carbon can vary to shades of yellow, green, red, brown, or black. It is used for architectural and ornamental purposes. The finest Italian marble is pure white calcite and has been prized by sculptors throughout history.

The value of marble as a building stone has been recognized from earliest times on account of its beauty, its resistance to weathering and the ease with which it can be worked. The ancient Egyptians and the Greeks used it for their temples and public buildings, and the Roams of the imperial age sought it out al over their great empire. Most of the classical architecture is in white marble, but the Arabs and Byzantine people preferred colored varieties.

It was used extensively again during the Renaissance and is still employed in building, but now a covering of it is superimposed on a core of less valuable material.


How marble is quarried

The marble is cut away from the mountain in large blocks by means of a device called the helicoidal wire, which consists of a steel cable formed of three wires twisted together. The cable runs on pulleys whose position can be adjusted, so that the cable can be brought into contact with the marble, into which it cuts a groove. Sand and water is put into the groove, and this assists the cutting, by the friction of the sand, so that the cable eventually saws its way right through the mass of rock. Explosives are sometimes used, but are generally avoided as the blast shatters the marble.

The blocks of marble are cut out with the helicoidal wire are taken down into the valley on overhead cables or on trolleys running on rails, or sometimes by means of a device called in Italian a lizza. Tis consists of two wooden beams, curved up at the front and joined by transverse pieces; it is really a very large sledge or toboggan. The marble block is loaded on to the lizza, which is held and controlled by steel cables. It is then allowed to slide down over wooden beams, soaped to reduce friction, and as soon as it has passed over a beam this is picked up and put in front again. In this way a large block of marble can be conveyed down into the valley to the workshop.

When the blocks of marble arrive at the workshops in the valley below the quarries they are first cut up by sawing machines into slabs of equal thickness.

The slabs are then passed to rectifying machines, which square them accurately, are planed smooth and finally polished with a rotating disk of felt covered with a layer of lead. This gives the marble a brilliant luster.

In every age and civilization marble has been the material preferred by sculptors. The marble statues of classical antiquity, both Greek and Roman, were fashioned of Parian marble, so-called because it was quarried on the Greek island of Paris. Pentelic marble, also much used for statuary, was obtained from Mount Pentelic near Athens. The great sculptors of the Renaissance, and of the following centuries up to the present day, have almost always used the white Carrara marble of northern Italy.