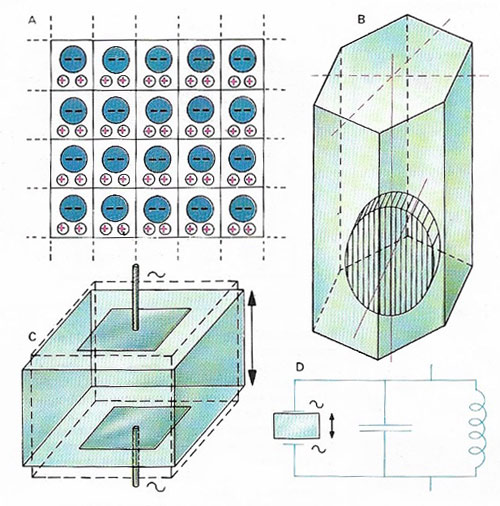 Certain crystals exist in the form of 'cells' in a delicate state of electrical equilibrium (A). Applying a varying voltage across the crystal disturbs the delicate balance and causes the crystal to vibrate and emit sound or ultrasonic waves, generally at a specific angle to the direction of the applied voltage (B). Conversely, when such a crystal is vibrated, it generates a voltage. This effect, known as piezoelectricity, is made use of in a gramophone pick-up (C) and in crystal microphones. In the pick-up, the movement of the stylus in the record groove rapidly vibrates a piezoelectric crystal and generates a small electric current. In a crystal microphone, sound waves vibrate a diaphragm coupled to a crystal and thereby generate a current that can be amplified and fed into a tape recorder or sound system. Most crystals respond strongly to only one frequency, depending on their dimensions. Radio transmitters make use of this property to 'hold' a particular fixed frequency (D).

The piezoelectric effect is a reversible relationship between mechanical stress and electrostatic potential exhibited by certain crystals, including quartz, sapphire, tourmaline, Rochelle salt. and crystals containing barium titanate. The effect, and the electricity to which it gives rise (piezoelectricity), was discovered in 1880 by the French chemist Pierre Curie (1859–1906) during investigation of pyroelectric crystals, which are also asymmetric and get oppositely charged faces when heated).

When pressure is applied to a piezoelectric crystal, positive and negative electric charges appear on opposite crystal faces (Fig 1A and 1B). Replacing the pressure by tension changes the sign of the charges. If, instead, an electric potential is applied across the crystal, its length changes; this effect is linear. Because of the effect, a quartz crystal that is mechanically vibrating gives rise to an AC voltage across its face. As the frequency of mechanical vibration of the crystal depends upon the dimensions and other parameters of the crystal, the AC voltage thus generated possesses a vary constant frequency This is utilized in stabilizing the frequencies of electronic signal generators.

The reverse effect is when a piezoelectric crystals placed in an alternating electric circuit causing it alternately to expand and contract, i.e., a mechanical deformation of the crystal results (Fig 1C). Resonance occurs in the circuit when its frequency matches the natural vibration frequency of the crystal, an effect that is applied in frequency controllers (Fig 1D). This useful way of coupling electrical and mechanical effects is used in a wide variety of electromechanical transducers, such as microphones, phonographic pick-ups, pressure sensors, and accelerometers. Piezoelectric crystals are also used in quartz clocks and watches, which are accurate to within a few seconds over a period of several years. In addition, the reverse piezoelectric effect provides a convenient means of producing ultrasonic waves (see ultrasonics). If an AC voltage is applied to the faces of a crystal, and the frequency of the voltage is identical to the natural frequency of the crystal's mechanical vibration, the crystal can be made to vibrate violently and thus serve as a source of ultrasonic radiation.

It is observed also that when a crystal with piezoelectric properties is heated or cooled it develops charge at its surfaces – an effect known as pyroelectricity. These are piezoelectric charges resulting from the strain associated with thermal expansion and contraction of the crystal.