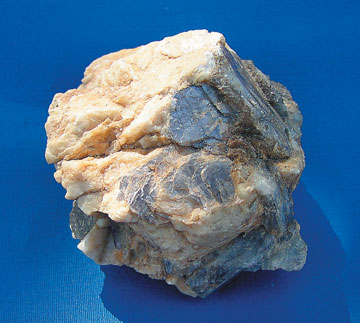 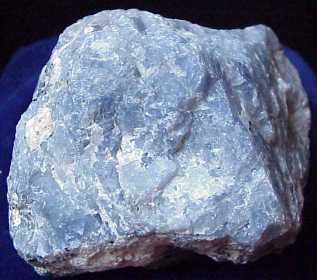 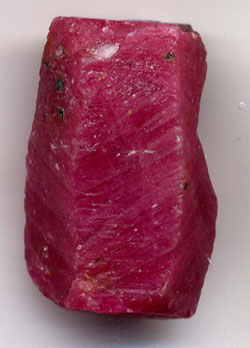 Corundum is a translucent to transparent crystalline (rhombohedral) form of aluminum oxide (alpha-Al2O3) which comes in many different hues (Fig 1). It is found in igneous and metamorphic rocks, occurring as pyramidal or prismatic crystals in the rhombohedral class and as granular masses. The corundum structure has close-packed oxygen with aluminum in octahedral holes. Mineral varieties of corundum include ruby, sapphire, and emery. Artificial corundum, or beta-alumina, is made by calcining bauxite (see calcination).

Corundum is the hardest natural substance known after diamond and is also chemically inert and resistant to corrosion. It is used extensively as an abrasive and in bearings (for example, in motors and watches). Hardness 9, relative density 4.

Sapphire (Fig 2) is any of the gemstone varieties of corundum except those which, being red are called ruby; blue sapphires are best-known, but most other colors, produced by impurities of iron and titanium, are known. The best sapphires come from Kashmir, Myanmar, Thailand, Sri Lanka, and Australia. Synthetic stones, made by flame-fusion, are used for jewel bearings, phonograph styluses, etc.

Ruby (Fig 3) is a deep red gemstone, a variety of corundum colored by a minute proportion of chromium ions. It is found significantly in upper Burma, Thailand, and Sri Lanka, and is far more precious than diamond. The name has been used for other red stones, chiefly varieties of garnet and spinel. Rubies have been synthesized by the Verneuil flame-fusion process (1902). They are used to make ruby lasers