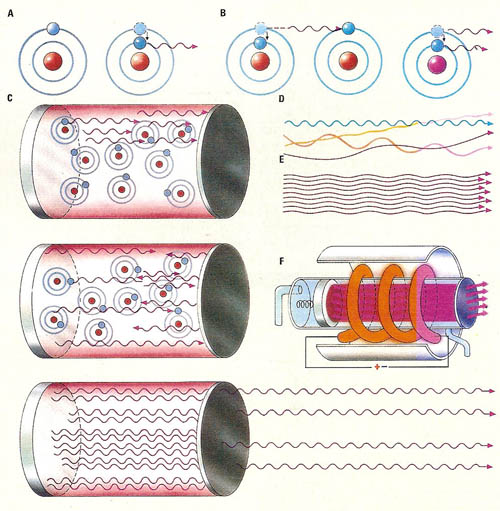 Normal emission of light occurs when an electron in a high-energy orbit falls to a low orbit (A). Stimulated emission (B) is triggered by light emitted from another atom. In a laser (C), most atoms are brought to a high-energy state by pumping in energy. Some begin to produce light by normal emission, and mirrors at each end reflect the light to and fro, producing stimulated emission until all the atoms are in a low-energy state. The light leaves the laser through one of the mirrors. Ordinary light (D) is a mixture of different frequencies moving in various directions, whereas laser light (E) has a single frequency and moves in the same direction with all waves in phase. The first laser (F) contained a synthetic ruby crystal surrounded by a flash tube (to pump in light energy) and a pair of reflecting mirrors.

A laser is a device that produces light or some other form of electromagnetic radiation that is monochromatic (of a single wavelength), coherent (in step), and contained in a narrow beam. The name is an acronym for 'light amplification by the stimulated emission of radiation.' The first pulse laser, invented by Theodore H. Maiman in 1960, contained a ruby crystal and produced a short flash of red light.

The light produced by lasers is very different from that produced by conventional sources. In the latter, all the source atoms radiate independently in all directions, whereas in lasers they radiate in step with each other and in the same direction, producing coherent light. Such beams spread very little as they travel, and provide very high capacity communications links. They can be focused into small intense spots, and have been used for cutting and welding – notably in eye surgery for refixing detached retinas and correcting vision. Lasers also find application in distance measurement by interference methods, and in spectroscopy, holography, and optical scanning.


Principles of the laser

The principles of laser operation are the same as those for the maser. The active material is enclosed between a pair of parallel mirrors, one of them half-silvered; light traveling along the axis is reflected to and fro and builds up rapidly by the stimulated emission process, passing out eventually through the half-silvered mirror, while light in other directions is rapidly lost from the laser.

In pulsed operation, one of the end mirrors is concealed by a shutter, allowing a much higher level of pumping than usual; opening the shutter caused a very intense pulse of light to be produced – up to 100 megawatts for 30 nanoseconds – while other pulsing techniques can achieve 1013 watts in picosecond pulses.

Among the common laser types are ruby lasers (optically pumped, with the polished crystals ends serving as mirrors), liquid lasers (with rare earth ions or organic dyes in solution), gas lasers (an electric discharge providing the high proportion of excited states), and the very small semiconductor lasers (based on electron-hole recombination).

It has been suggested that laser light, either continuous or pulsed, affords an effective means of communicating over interstellar distances, a concept that forms the basis of optical SETI. Harvard physicist Paul Horowitz, for example, has proposed that a device such as the Helios laser being planned at the Lawrence Livermore National Laboratory would enable nanosecond-long pulses to be generated, with 3,000 times the brightness of the Sun, which would be detectable out to a distance of 1,000 light-years.