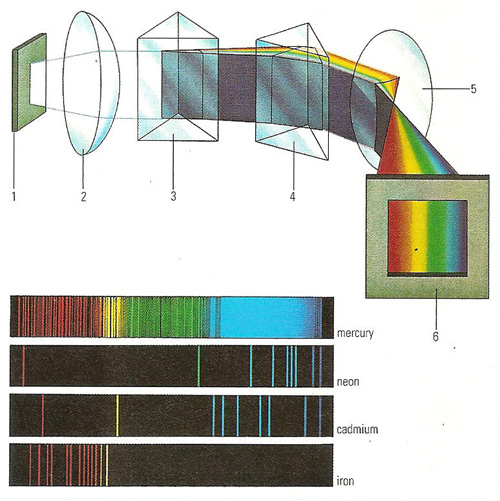 The spectroscope (upper diagram) is used to analyze light. Light from a telescope is passed through a fine vertical line in a plate (1). A lens (2) concentrates the rays onto a prism (3), which splits them into a spectrum. A second prism (4) is positioned so that the spectrum is widened even further after passing through it. The wide spectrum is then focused by a lens (5) onto a screen (6). The screen may be replaced by a recording apparatus; this instrument is called s spectrograph. The lower diagram shows a typical emission spectrum from various elements. The colored lines become dark when superimposed on the continuous spectrum giving Fraunhofer lines.

A spectroscope is an instrument used for splitting light, or other electromagnetic radiation, into its component wavelengths – a spectrum – for visual observation. Spectroscopes are used in astronomy to study the light from stars and other celestial objects, and in chemistry to detect the presence of traces of various elements in samples that are too small analyze by other means.

The light entering a spectroscope is collimated into a narrow beam by means of a slit and lens. The beam then passes through a prism or a diffraction grating so that it is dispersed into a spectrum. Combined with the grating or prism is a scale from which the spectral wavelengths may be read directly through the telescope that magnifies the spectrum.

Astronomical spectroscopes are known as spectrographs or spectrometers. Strictly, a spectrograph is a spectroscope equipped with a camera for recording a permanent record of a spectrum, whereas a spectrometer incorporates devices for accurately measuring the wavelengths and intensities of the spectral lines.

Spectroscopy is the production, measurement, and analysis of spectra. It is an essential tool of astronomers, chemists, and physicists. All spectra and spectral lines arise from transitions between discrete energy states of matter, as a result of which photons of corresponding energy (and hence characteristic frequency or wavelength) are absorbed or emitted. From the energy levels thus determined, atomic and molecular may be studied. Moreover, by using the observed spectra as "fingerprints," spectroscopy may be a sensitive tool of chemical analysis.

There are several more specialized kinds of spectroscopy. Raman spectroscopy (see Raman spectroscope), based on the effect discovered by C. V. Raman, scans the scattered light from an intense monochromatic beam. Some of the scattered light is at lower (and higher) frequencies than the incident light, corresponding to vibration/rotation transitions. The technique thus supplements infrared spectroscopy. Mössbauer spectroscopy, based on the Mössbauer effect, gives information on the electronic or chemical environments of nuclei; as does nuclear magnetic resonance spectroscopy, based on transitions between nuclear spin states in a strong magnetic field. Electron spin resonance spectroscopy is similarly based on electron spin transitions when there is an unpaired electron in an orbital, and so is used to study free radicals. The instrument used is a spectroscope, called a spectrograph if the spectrum is recorded photographically all at once, or a spectrometer if it is scanned by wavelength and calibrated from the instrument.

The advent of spectroscopy, in the 1860s, marked the birth of astrophysics as an observational science.

A spectrograph is a spectroscope fitted with a camera or an electronic detector such as a charge-coupled device (CCD) used to obtain a permanent record of the spectrum so that the intensity at different wavelengths can be measured. It consists of a slit for isolating the light from a particular object in the telescope’s field of view, a collimator for directing this light into a parallel beam, a diffraction grating or prism for creating the spectrum, and a detector for recording the spectrum. In the past the detector would have been a photographic plate but today CCDs, which are far more sensitive, are typically used instead.