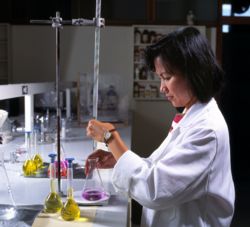 A titration is performed to estimate the unknown concentration of a solution by reacting it with a "standard" solution of known concentration. This is usually added from a burette to a fixed volume of the "unknown". The end-point of the reaction is shown either by a visible change in the reactants or by the addition of a chemical indicator. Acid/base indicators have different colors according to the hydrogen-ion concentration (pH) of the solution and change as the pH of the solution changes. The pH at which color changes occur varies so an indicator can be selected that shows a color change at a pH close to the end-point.

Metal ions can be detected in qualitative chemical analysis by a systematic separation into groups by means of a series of characteristic precipitation reactions. The chemist tries to dissolve a sample of the substance to be analyzed in dilute hydrochloric acid. Metals with insoluble chlorides – lead, mercury and silver – constitute Group l. Next hydrogen sulphate is bubbled through the acid solution; a sulphate precipitate indicates one of Group II metals – antimony, arsenic, bismuth, cadmium, copper or tin. The addition of ammonia solution precipitates the hydroxides of the Group III metals – aluminium, chromium, iron or manganese. The Group IV metals have sulfides that are precipitated from alkaline solution by bubbling in hydrogen sulphide gas; they are cobalt, nickel or zinc. The addition of ammonium carbonate to the remaining solution at this stage of the analysis precipitates the carbonates of barium, calcium or strontium, the Group V metals. Group VI of the analysis table contains the metals magnesium, sodium and potassium as well as the "metallic" ion ammonium, left after eliminating all other possible metal ions. This analysis scheme can be carried out on the semi-micro scale and it can be enlarged to include some of the less common metals. It reveals only the presence of a metal and not its quantity. 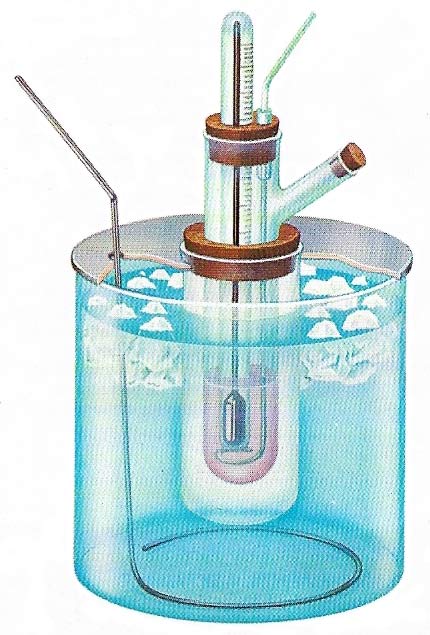 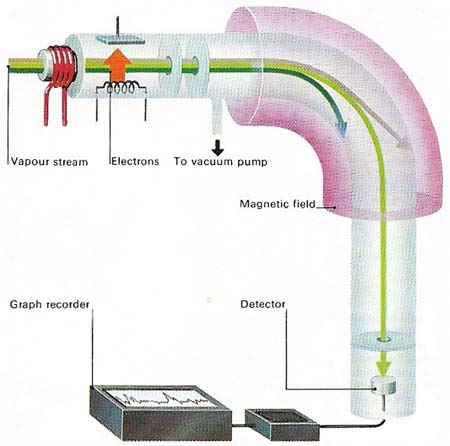 The masses of atoms can be compared with great accuracy using a mass spectrometer. A vaporized sample is ionized by electron bombardment and the beam of positive ions produced is accelerated to a constant speed. Application of a strong magnetic field deflects the beam – the lightest ions being deflected most and heaviest least. The field is adjusted so that ions of a particular mass fall on to a detector, either a moving photographic plate or an electrometer. From an electrometer the signal is amplified and recorded on a graph. Further adjustment of the magnetic field allows ions of different mass to be recorded. 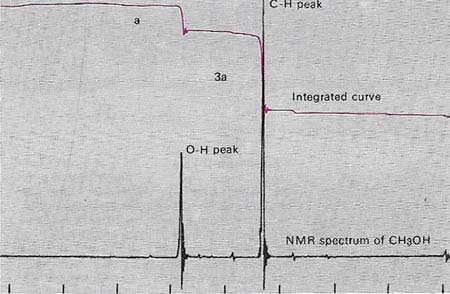 Nuclear magnetic resonance (NMR) spectroscopy of a substance with a molecular formula of CH4O shows two peaks. The areas under the peaks are integrated automatically and indicated by the upper curve. This shows a ratio of one to three. The inference is that the four hydrogen atoms in the molecule are arranged so the three are in the same environment, and the other is different. The larger peak is produced by those in O–CH2 group and the smaller by that in the O–H group – indicating the structure CH3OH: methanol. Normally a "standard" is added and all lines are measured relative to it. Tetramethylsilane or a sodium salt of 4,4-dimethyl, 4, silapent-anesulfonic acid is a suitable standard.

Infrared radiation is absorbed by the chemical bonds in an organic compound and can cause vibrational effects in them. The frequency of the absorbed radiation is characteristic of the bond concerned, so that measuring these frequencies provides a means of determining the bonds present and analyzing the compound. This is the basis of infrared spectroscopy. The absorption frequencies are measured electronically and plotted as a series of peaks on a graph. In this example the main absorption peak at a frequency of 750 cm-1 is due to stretching of a carbon-chlorine bond, indicating that the substance producing it is probably tetrachloromethane (carbon tetrachloride CCl4). The minor peak at 1,550 cm-1 is probably a harmonic of the main one. The bending and rocking of chemical bonds after infra-red absorption also produce characteristic peaks on the spectrograph and aid the analysis.

Chemical analysis is concerned with determining the compounds or elements comprising a chemical substance. Qualitative analysis deals with what a sample contains; quantitative analysis finds the amounts. The methods available depend on the size of the sample: macro (> 100mg), semimicro (1–100mg), micro (1μg–1mg), or submicro (< 1μg).

Chemical analysis is valuable in chemical research, industry, archeology, medicine, and many other fields. A representative sample must first be taken and prepared for analysis. Preliminary separation is often carried out by chromatography, ion exchange, distillation, or precipitation.

In qualitative analysis, classical methods involve characteristic reactions of substances. After preliminary tests – inspection, heating, and flame tests – systematic schemes are followed which separate the various ions into groups according to their reactions with standard reagents, and which then identify them individually. Cations (positive ions) and anions (negative ions) are analyzed separately. For organic compounds, carbon and hydrogen are identified by heating with copper (II) oxide, carbon dioxide and water being formed; nitrogen, halogens, and sulfur are identified by heating with molten sodium and testing the residue for nitrile, halides, and sulfide, respectively. Classical quantitative analysis is performed by gravimetric analysis and volumetric analysis.

Modern chemical analysis employs instrumental methods to give faster, more accurate assessments than do classical methods. Many modern methods have the additional advantage of being nondestructive. They include colorimetry, spectrophotometry, polarography, mass spectrometry, differential thermal analysis, potentiometric titration (see potentiometer, and methods for determining molecular weight. Neutron activation analysis subjects a sample to neutron irradiation and measures the strength of induced radioactivity and its rate of decay. In X-ray analysis, a sample is irradiated with X-rays and emits X-rays of different, characteristic wavelengths (see X-ray crystallography).

Qualitative inorganic analysis is generally carried out on a semi-micro scale using small quantities – much less than a gram. Chemists make preliminary tests on a dry sample of a substance and these give general information about its composition. The effect of heat may cause a color change, sublimation or the evolution of a gas. A reagent is added to a solution of the sample and the resulting mixture examined for the evolution of a gas, a precipitate or a coloration.

Metal ions are identified by a systematic separation into "groups". A variety of techniques exists, but metals are usually split into groups by adding a series of reagents and collecting any precipitate produced. Group precipitates are, in turn, separated and identified by characteristic reactions. Quantitative inorganic analysis may be carried out using either volumetric or gravimetric methods. Volumetric analysis involves reacting a solution of known concentration, referred to as a "standard" solution, with a solution of the substance to be determined. After preparing the standard solution the chemist carries out a titration in which one solution is slowly added to the other. From the concentration and volume of the standard solution, the concentration of the "unknown" can be calculated.

Gravimetric analysis involves preparing a solution with a known mass of the sample. This solution is then reacted with a chosen reagent so that the desired component is completely separated, generally as a precipitate. The product, which must be pure, is isolated and weighed and the amount of the component calculated.

Merely identifying the elements present is insufficient to make a definite description of an organic compound. The ability of carbon compounds to exhibit isomerism (in which two different substances can contain the same chemical elements, in the same proportions, but combined in a different way) means that the arrangements of the elements present must also be analytically determined.

Identification of the elements in an organic component involves systematic elimination of all possible elements one by one. Carbon and hydrogen are always present and tests for them are rarely carried out. But tests are made to identify other elements. An example is the Lassaigne sodium fusion, which reveals the presence of nitrogen, the halogens (chlorine, bromine and iodine) and sulphur. A knowledge of the elements allows a chemist to allocate the compound to a main group. This is followed by the application, within the group, of classification tests for functional groups, which determines the types of organic compound present.

Quantitative organic analysis also involves estimation of the elements present, followed by purification and a determination of molecular weight to give the empirical and molecular formulae. The amounts of carbon and hydrogen are found by completely oxidizing a known mass of the organic compound and weighing the carbon dioxide and water formed. Then any other elements are estimated by a variety of methods.

These results allow the chemist to calculate the percentage composition of the substance (the proportion of each element present) and to determine its empirical formula. The molecular formula is found by comparing the empirical formula with the molecular weight. Dissolving a sample of the substance in a solvent affects the physical properties of the solvent. The lowering of vapor pressure, the elevation of boiling point and the depression of freezing point are all proportional to the mole fraction (concentration in terms of molecular weight) of the dissolved substance present in the solution. The concentration also affects the osmotic pressure, viscosity and light-scattering properties of solutions. Careful measurement of one of these effects is then followed by a calculation of the molecular weight before the chemist has enough information to complete the analysis.

Various forms of chromatography are based on the fact that different substances diffuse or are absorbed at different rates. Spectroscopy makes use of the fact that each species of atom has a unique characteristic spectrum. A spectrum is produced when atoms, ions or molecules are excited by absorbing energy and may be observed by using a prism or, preferably, a diffraction grating.

In mass spectroscopy a substance is bombarded with low-energy electrons and fragmentation produces a number of positive ions. Ions of the same mass/charge ratio are focused by magnetic or electrostatic fields and detected photographically or electronically. The highest mass/charge ratio can give the molecular weight. Investigation of the fragmentation pattern determines the molecular structure.